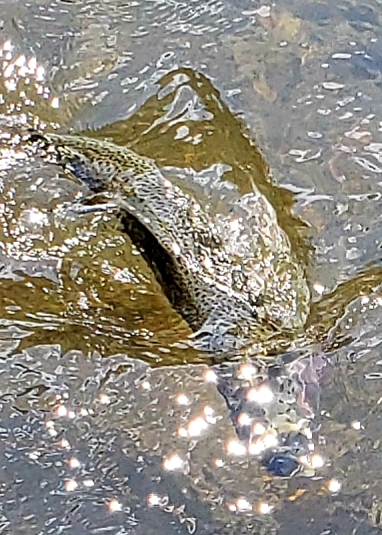 Tilting the Axis Toward Trout

Although the chilly rains of late March feel more like late winter as I write this, the tilting axis of planet earth has passed through the vernal equinox into spring, and almost everyone I know is enjoying the “extra” hour of evening light from moving our clocks forward.

For anglers in the Pacific Northwest, turning the calendar page to April marks another transition as we shift our pursuits from winter steelhead to trout.  Fishing partner Rick Pay and I completed our final winter steelhead trip of 2021 with a beautiful day float on the upper Wilson River from Kansas Creek to Mills Bridge in late March.  We fished again with Alex Gonsiewski and his canine first mate Nellie and covered lots of great water, but alas no fish were harmed (or even seen) in the making of this adventure, so my lifetime fishless streak for winter steelhead on the fly remains unblemished.  I had a heart pounding moment of excitement when my T-14 tip snubbed some rocks toward the end of the swing, causing the line to tug and release several times in succession.  Rick had a similar experience fishing a different run, but that was as close as we came to finding a fish.  Our experience seems to mirror that of most other winter steelheaders this winter, so it’s safe to say it’s been a dismal year.  Alex told us he had not seen a fish for two weeks and relayed similar reports from guides all the way from California to British Columbia.

My first trout trip of 2021 was a much more productive experience.  I was invited to fish at Rainier Lakes about 90 minutes from Portland.  It’s private water that is part of the Oregon Fishing Club, and I had a delightful day in mid-March fishing for stocked Kamloops rainbows.  Conditions were clear and cool with a bit of a breeze, but the fish were active and my host and I managed about a dozen each.  All of my fish took chironomids and balanced leeches under an indicator.  We saw lots of splashy rises and some tiny midges coming off the surface, but were unsuccessful with dry flies.   The average size of this year’s class of planted fish is about 13-14” but most of them were scrappy fighters, and the winter holdovers run bigger.  I landed several fat 17” fish and my host told me that he got into a number that exceeded 20” on his previous trip.

April will be a relatively quiet angling month for me.  None of my scheduled steelhead trips were canceled due to conditions, so I’m already well into my guided trip budget for the year, and my domestic economic advisor has strongly suggested that I reacquaint myself with better work habits.

Plans continue for our 2021 auction to raise money for the Keith Hansen Memorial Paddle Raise.  This year’s auction will be online due to lingering concerns about the pandemic, but it’s shaping up to be a great event.  Auction chair Janet Arenz has been working hard to ensure a successful event and will be providing more details about the auction soon.  Thanks to all FCO and FFF directors who have donated items to the board baskets.  I’m in the process of gathering them this week and can assure you that these will be fabulous.

I’m encouraged by the deployment of multiple vaccines and looking forward to what I hope is the not so distant future when we can resume in-person meetings.  In the meantime, stay healthy and safe and take advantage of the coming warmer temperatures to get outside and go fishing.