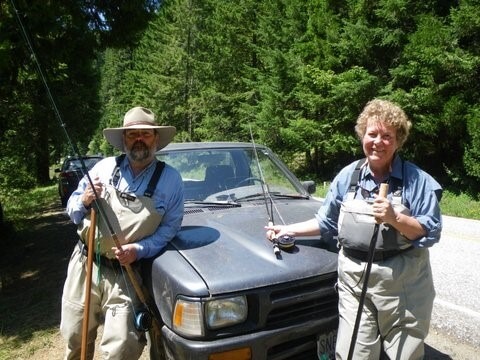 The Steamboaters’ Tim Goforth and Wife, Kath Krieter, on the North Umpqua

Editor’s Note: Nearly twenty years ago, I hooked (but eventually did not land) my first steelhead on the North Umpqua River in a legendary pool called Charcoal Point. I was awestruck by the power and beauty of this wild fish. So for the love of wild steelhead and a river so dear to our hearts, we have the chance to help bring more of these beautiful fish back to the North Umpqua. But the best folks to share the importance of this 2021 opportunity are the Coalition leaders of our Keith Hansen Memorial Paddle Raise Grantee. lkh

Jeff Dose, Board of Directors, The Steamboaters

The North Umpqua River is a unique and invaluable resource.  It is one of only two Oregon Rivers that flow directly from the crest of the Cascade Mountains to the Pacific Ocean.  Due to this geological and hydrological situation, it has resulted in the natural selection of several uncommon populations of wild salmonid fishes.  This includes a population of wild summer steelhead, one of only three along the entire Oregon Coast.

As you may know, the U.S. Congress recently passed legislation designating the Frank and Jeanne Moore Wild Steelhead Special Management Area within the Steamboat Creek watershed, a major tributary to the North Umpqua River.  While important legislation, it only applies to a small portion (approximately 10%) of the North Umpqua River basin.  I believe that the management direction contained in this legislation could, and should, be expanded elsewhere throughout the North Umpqua basin.  This is of a critical need for wild steelhead and should result in an increased emphasis on protection and enhancement of wild steelhead.  Currently, the winter steelhead run is entirely wild and is thriving.  On the other hand, the rare and unique summer steelhead – as mentioned earlier, there are only three wild populations along the entire Oregon Coast – are showing substantial declines.  Most of the life-history of wild winter and summer steelhead is similar in time and space.  The only significant difference is the presence of substantial hatchery production of summer steelhead.    There are several factors in this decline, but environmental and biological factors associated with the hatchery program are most certainly a significant causal mechanism in this decline.  Recovery of abundant wild summer steelhead populations in the North Umpqua River must address this long-standing, but inappropriate, practice.

A number of individuals and organizations are working diligently to effect this needed change.  They need your support.

The Flyfishers’ Club and the North Umpqua: A natural connection with a most iconic wild steelhead river

The Conservation Angler is very proud to be a member of the North Umpqua Coalition and for the Coalition to be the Flyfisher Foundation’s 2021 Keith Hansen Memorial Conservation Grantee.

As a former FCO member and President of the Flyfisher Foundation Board, I have strong memories of the many FCO members who kept the Club and Foundation connected to the wild steelhead of the North Umpqua – people like Robert Sheley, Brian Light and Lisa Hansen who considered it their home waters – and then there are those members who have passed – including John Eustice and Keith Hansen – whose connection to the North Umpqua was deep and abiding. 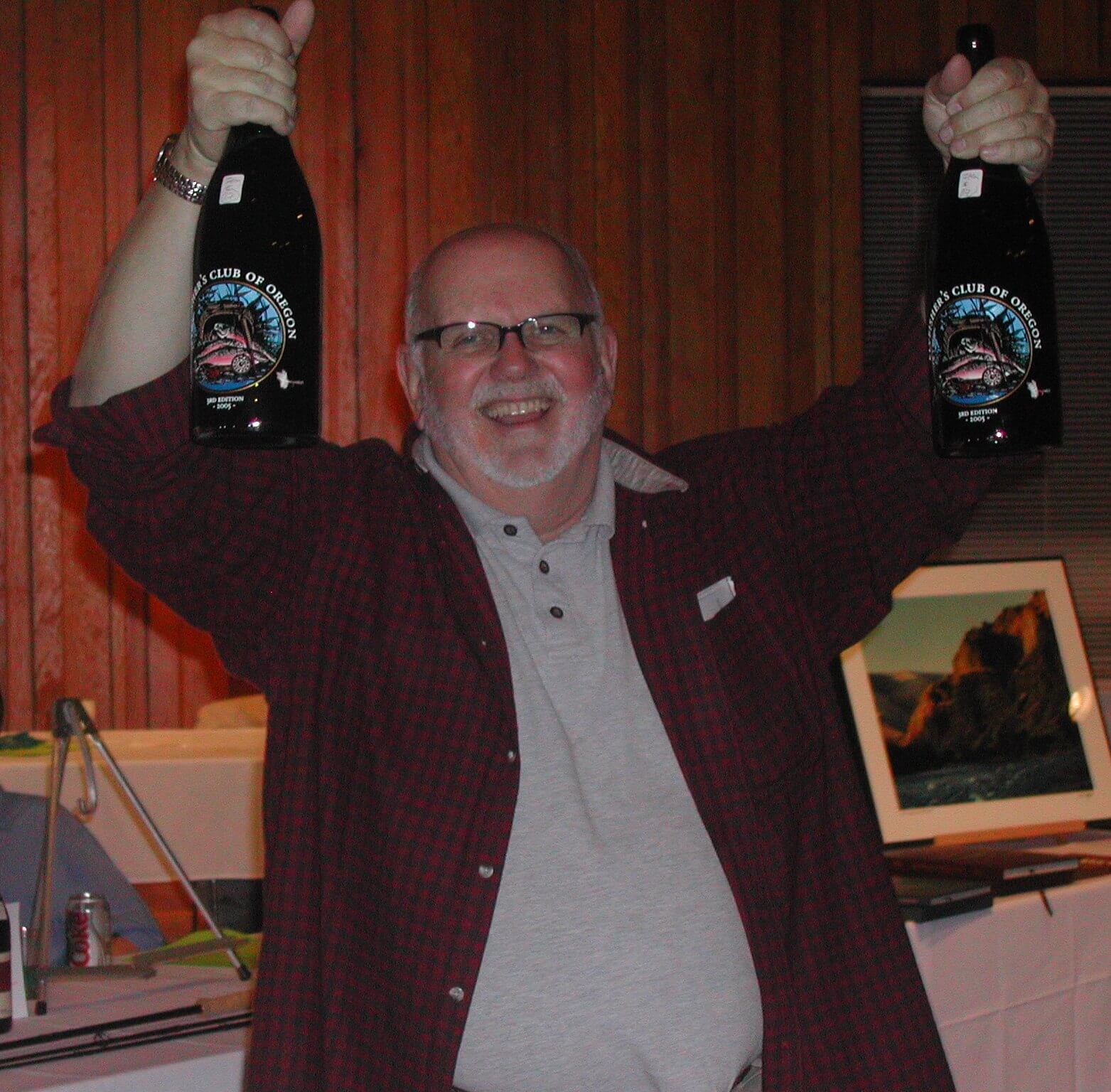 The ever exuberant John Eustice in 2007

The Flyfishers’ Club and the Flyfisher Foundation have proudly supported North Umpqua Coalition – as well as Karl Konecny who also serves on the board for the Steamboaters and TNUF – is committed to our work with the North Umpqua Coalition securing a wild steelhead future there. TCA’s work is dedicated to secure this wild fish legacy to honor FCO members like Keith Hansen and John Eustice.

The North Umpqua brings to mind soft forest paths, shadowy runs, cold clear waters folding and streaming past smooth ledges and boulders, and wild steelhead groups like The Steamboaters, The North Umpqua Foundation, Trout Unlimited and Pacific Rivers Council in their many efforts to protect the wild North Umpqua and its wild fish.

The Conservation Angler – whose Board includes Robert Sheley and Jim Van Loan – as well as Karl Konecny who also serves on the board for the Steamboaters and TNUF – is committed to our work with the North Umpqua Coalition securing a wild steelhead future there. TCA’s work is dedicated to secure this wild fish legacy to honor FCO members like Keith Hansen and John Eustice.

The North Umpqua brings to mind soft forest paths, shadowy runs, cold clear waters folding and streaming past smooth ledges and boulders, and wild steelhead – most often hidden – sometimes right at your feet and others beyond your longest cast on a good day. The anticipation only grows as you drive along the river and rarely subsides as you imagine again the surprising rise to your fly from past trips fastened in your memory.

We are grateful for this opportunity and look forward to working with the Foundation and the Club to achieve our wild steelhead vision for this River.

The Archie Creek fire was devastating to the lower 18 miles of the famous fly-only waters of the North Umpqua basin. The beautiful old-growth forest will never be the same, and landscapes have been altered for years to come.

This tragic event has brought a unique opportunity, restoring an all wild Steelhead in North Umpqua. Summer Steelhead have been facing multiple years of decline. Habitat is not the limiting factor. Our management and releases of hatchery reared fish are limiting these fish from reaching full potential. Between the competition and introgression the hatchery fish impose, the wild native summer Steelhead are struggling to survive.

I ask you, please help us restore a wild river before it’s too late. Let’s promote wild fish that will better adapt to climate change. We are at a tipping point – our actions now will decide the future of this iconic fishery. Your contributions and advocacy to this work will help us in our mission to restore abundant wild fish in the North Umpqua Basin.

Since 1983 The North Umpqua Foundation (TNUF) has worked to preserve an iconic river and drainage.  Historically, TNUF has focused on:

TNUF’s commitment to the health of the North Umpqua ecosystem has caused it to lend its support to the need to overcome the tragedy of the Archie Creek fire.  Not only to lend assistance to physical needs of the land, but to join in this coalition of organizations seeking to convince ODFW of the folly of rebuilding the Rock Creek Fish Hatchery.  TNUF believes that hatchery steelhead have no place in the North Umpqua, and the millions of dollars that a rebuild would cost can be put to much better uses.  Please join our efforts to protect and enhance the irreplaceable wonder that is the North Umpqua River.