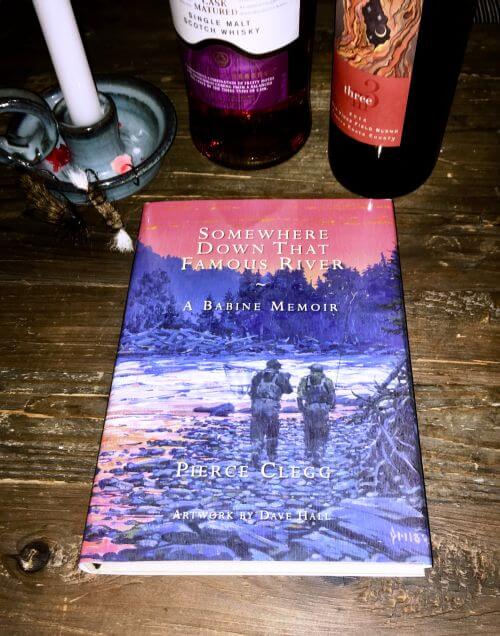 Somewhere on a B.C river, an FCO member reflects

To love a river, one grows to love just being there. Even if weather dashes a fishing day, you can be soothed by  imagining you are on its banks as it overcomes boulders and continuously rushes toward the sea. This book review from Dr. Mark Metzdorff reflects his love (addiction, he admits) for the Babine River. His respect for the book’s author, Pierce Clegg, shines when he speaks of his friend’s love for the river – . . . “from the beginning, he saw the unique irreplaceable natural value, and fragile nature, of the Babine watershed.” LKH

Full Disclosure:  Pierce Clegg, whose new book is reviewed below, has been a friend for 25 years.  When he was building his clientele he used to travel through Portland on his way to a sports show in Sacramento, so in 2006 I corralled him into speaking at the February FCO meeting.  He spoke of the magic of late-season fishing on the Babine, when snow and ice are a constant issue, but the solitude and numbers of fish are unmatched.  After his talk I took him steelheading on the Nehalem River in my wooden boat, and the relationship of guide and client was reversed.  I’ll be forever grateful to the steelhead gods that I got Pierce into a nice wild winter fish, and we both will never forget it.

By Pierce Clegg; artwork and Forward by Dave Hall

Anyone who has had the privilege of fishing the legendary Babine River for steelhead can attest to the addictive attraction that results from the experience.  The mixture of wilderness solitude, unparalleled natural beauty, the likelihood of wildlife encounters with bears, eagles, moose, wolves and other denizens of truly wild places, combined with the certainty of fine fishing for numerous large and potentially world-record-sized steelhead, results in a reassessment of one’s fishing priorities.  A good many anglers, having been truly baptized in Babine’s waters (for no other steelheading destination could inspire such a religious conversion), become annual regulars at their favorite Babine lodge, of which there are only three to choose from.  Some anglers have come back to the Babine for two or even three weeks each year at one of the these expensive lodges, a testament to financial independence or irresponsibility, a spouse understanding or uncaring or nonexistent, time to burn or no time to lose, or some combination of the above; in other words, the profile of an addict.

I was and remain one such fortunate/unfortunate; for several years now in remission in terms of Babine, but like a true addict, never really cured.  I was fortunate to spend a week each year for about a dozen years at Pierce Clegg’s Babine Norlakes Lodge, the uppermost and oldest lodge on the storied river.  Something many people don’t know is that Norlakes started in the late 1940s as a trout fishing camp on immense Babine Lake, the source of the river in north central British Columbia.  Years later the original owner expanded into steelhead fishing on the river below a government-operated fish counting weir that is essentially the beginning of the steelhead water, putting in a new camp about 4 kilometers below the weir.  In 1986 Pierce took over the ownership and operation of both camps as a 25-year-old “landed immigrant” from California, and for 25 years provided an unparalleled experience to his guests, inspiring the aforementioned loyalty and return visits that made obtaining a week at Babine Norlakes Lodge a difficult-to-obtain and coveted engagement. 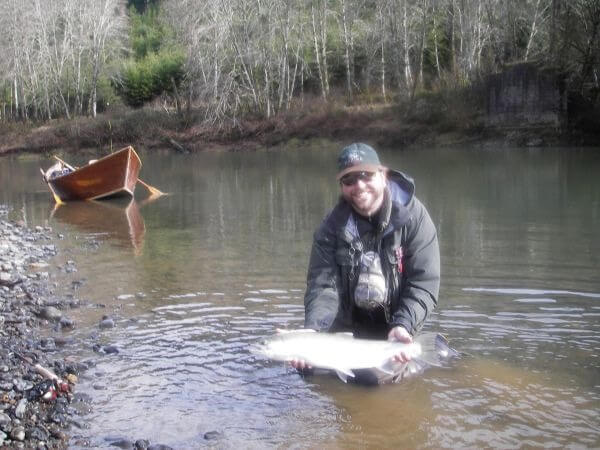 Pierce Glegg with a Nehalem beauty in 2006

Pierce Clegg is a gregarious, genial and indefatigable force of nature, which is what is required to run a successful wilderness tourism business; but such an endeavor takes a toll.  After 25 years of hard work and success Pierce and his lovely wife and partner Anita decided to find a suitable successor to carry on the tradition, selling the business in 2012 to another young couple versed in wilderness tourism.  In “retirement” Pierce threw a portion of his still vital energy into writing a memoir of his time on Babine, which is the subject of this review.

Somewhere Down That Famous River–A Babine Memoir tells the story of Pierce’s time on the river, from his seemingly ill-considered decision to abandon the beginning of a respectable career as a banker in California, through the trials, dangers and exhilaration of building a business (he soon realized he had inherited a literally dying clientele of octogenarian fishermen, return guests of the previous owner), to ultimately running a successful, mature (in development if not behavior!) and coveted wilderness steelhead camp on the best steelhead river on the planet.  Although certainly meaningful to those lucky souls who’ve fished the Babine, whether at Norlakes or one of the other lodges, this book will be enjoyed by anyone who appreciates a personal account of struggle and achievement, of the beauty of a wilderness setting, and of a range of some of the stranger characters and events to be encountered on a river.

The book is a handsome production, with a gold-embossed cloth hard cover beneath a lovely dust jacket.  The design is exquisite, enhanced by artwork done by Pierce’s long-time friend and North Umpqua resident Dave Hall, who also provided a touching and delightful forward.

The story is told in a series of chapters detailing Pierce’s early struggles dealing with the logistics of such an operation, the explorations that expanded the fishing grounds, memorable guests throughout his tenure, anecdotes of spectacular events that really happened (“Jet Boat Grizzly” is a highlight), and life in the Norlakes camp for guests and staff, which was wonderfully and weirdly unduplicated in any other steelhead camp .  I and countless other guests can attest that there are many more anecdotes that are best left unrecorded.  At his best, Pierce captures perfectly the unique sense of the natural beauty of the place, the sounds of solitude, the sights and smells of the riparian environment of fish and bears that daily delight the senses.  His writing took me right back there.

Pierce has always been a fierce advocate for the river, not just because of its economic benefit to outfitters like him, although he could be excused for pursuing the protection of his livelihood.  More importantly, from the beginning, he saw the unique irreplaceable natural value, and fragile nature, of the Babine watershed.  This sense of immense value and the possibility of imminent loss emerges frequently in Pierce’s prose.  Consequently, there are few of the chapters that do not contain a hint, or sometimes more than a hint, of a deserved scolding of we the people, the anglers, the citizens, the managers and legislators and government, for tolerating the sad legacy of resource mismanagement, the hopeful but unfunded and therefore impotent land use plans, the setting aside of 1% of the watershed for protection while allowing grievous exploitation of 99%.  Pierce can and does go on, and with well-reasoned arguments that we all need to be reminded of.  Man is making the bed he will lie in, often seeming to have no regard for the long-term consequences.  These are lessons worth pondering, hopefully inspiring action, hopefully it is not too late.

At a recent talk at the Smithers, B. C. public library, Pierce commented on the evolution of the book’s publication.  He purposely shopped the manuscript with dozens of Canadian publishers without success.  He eventually showed it to Tom Pero, well-known Seattle-based publisher of angling and other books (and who has addressed the Flyfisher’s Club of Oregon in the past), who immediately recognized the value of memorializing Pierce’s experiences and facilitated the book’s publication.  I was struck by this story because to me, it sometimes seems like Americans seem to value the Babine more than her native inhabitants, at least the relative newcomers of the past few centuries after the First Nations peoples.  In reality, in both countries it is power and money which wins out, often with minimum attention to natural consequences.  And of course, just as in the U. S., there are certainly many Canadians who understand the value of wild places and fight for their protection.  Pierce is one of them.  Perhaps this book will serve to inspire those in both countries to keep up the good fight.  If so, that will be yet another legacy of Pierce Clegg’s stewardship of the incomparable Babine.

[…] Read this great review from the Flyfisher’s Club of Oregon […]