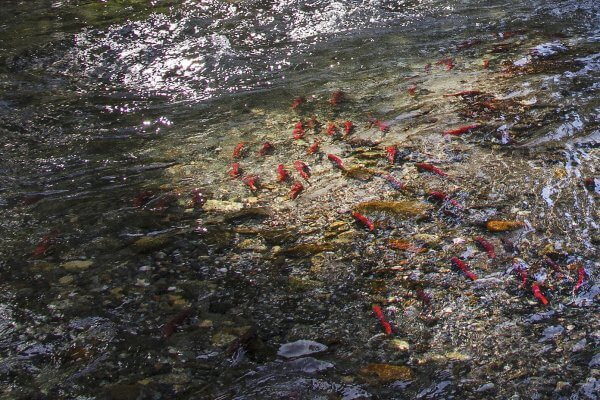 Editor’s Note: Tribal and NGO partnerships are finding creative ways to restore fish populations across the west. One of our newest FCO members, Rob Peterson, describes one such partnership in the northeastern corner of our state that hopes to restore sockeye salmon to the Wallowa Lake and Wallowa River. Rob comes to us by way of southern California where he still serves as the editor for his fly fishing club’s newsletter, Target Talk. Thanks Rob, for sharing your work and passion for fish! LKH

ROB PETERSON, TARGET TALK EDITOR – I’m involved with a couple of non-profits in Oregon. One is called “Eastern Oregon Legacy Lands.” This organization is working with the Nez Perce Tribe to bring sockeye salmon back to Wallowa Lake in northeastern Oregon, after an absence of 100 years. I cannot think of a more worthwhile conservation project.

At the time of Lewis and Clark, there were two major runs of sockeye salmon in Oregon: one on the Deschutes River in the central part of the state, and one on the Wallowa River in the northeast corner. Sockeye salmon normally spend their formative years in a “nursery lake”. On the Deschutes River, the nursery lake was Suttle Lake; on the Wallowa River, it was Wallowa Lake.

These runs formed the southern border of the sockeye’s range. The Wallowa River run was also the main source of food for the legendary Chief Joseph and the Nez Perce tribe. Before Joseph and the Tribe were unjustly forced from their home in the Wallowa “Valley of the Winding Waters”, the Tribe had lived there for hundreds, maybe thousands, of years. Each spring, they would move from their winter camps in the sheltered river mouths to the southern slopes of the hills. There they collected kouse roots for the “Time of First Eating.” In August and September, they would camp at the south end of Wallowa Lake and wait for the sockeye salmon run.

The run was magnificent, awe-inspiring. Thousands of brilliant red sockeyes jostled and pushed each other on their way up the Wallowa River. According to one source: “These fish were so numerous that the various channels [of the river] appeared as a solid red band. In fact, as the Nez Perce crossed these streams, their horses were sometimes seen to actually kick these fish out on the bank.”

The Nez Perce say that families often caught a year’s supply of salmon in one net. The sockeye run was the Tribe’s main food source and a keystone of its culture. Of every ten meals for a Nez Perce family, nine were salmon.

After refusing to sign the “Thief Treaty” of 1863, the Tribe’s relations with its white neighbors worsened. In 1877, Joseph and the Nez Perce began their famous 1,170-mile flight, pursued by the U.S. Army. They were captured 40 miles from the Canadian border, and were never allowed to return to their beloved Valley of the Winding Waters. A dam was built on Wallowa Lake in 1919; soon afterward the sockeye salmon disappeared.

But in 1996, the Wallowa Lake Dam was listed as a “High Hazard Structure.” Since then, the Nez Perce Tribe has worked with local conservation groups and irrigators to get it refurbished. And now, a hundred years after the dam was completed, The state of Oregon has funded “reconstruction” of the Wallowa Lake Dam.

These kokanee salmon in the upper Wallowa River are landlocked descendants of the original sockeye salmon run years after the dam was completed, the State of Oregon has funded the “reconstruction” of the Wallowa Lake Dam. This reconstruction effort includes fish passage, which is needed to make sockeye salmon reintroduction feasible. The appropriation is $14 million, to be supplemented by grants which will raise the total budget to $16 million. The reconstruction is currently scheduled to be completed “sometime in 2022”. The Tribe is working to realize a 100-year old dream: to re-introduce sockeyes to the Wallowa River.

Reintroduction of sockeye salmon has always been a major goal of the Nez Perce Tribe; they’ve been planning for it for many years. The Nez Perce Tribal Fisheries Department is currently doing limnological and prey base studies in Wallowa Lake. The department is well respected and has done some very good work re-establishing Coho salmon in the Wallowa and Clearwater River systems.

The historic prime spawning area for sockeye is the inlet of the Wallowa River at the south (upper) end of the lake. This area is in a nearly pristine state now. It is adjacent to the Wallowa Lake Lodge, a beautiful old resort hotel with a long history (I’ve stayed there). The owners had planned to put it up for auction, but a group of investors led by Eastern Oregon Legacy Lands, with help from the Nez Perce Tribe, purchased it instead.

This quote from the previous owner should shed some light on the reasons for the purchase: “For many years we have striven to assure the lodge property and the whole south end of the lake would be preserved in its natural state for the use and enjoyment of future generations. The new community-based ownership shares our hopes and dreams, and is uniquely positioned to achieve that goal. Their efforts have earned our strong support.”

The adjacent spawning area would be covered by a permanent conservation easement. The agreement between the lodge owners and the Tribe calls “for the Nez Perce Tribe to hold a conservation easement, which the tribe will purchase. The easement will prohibit development on most of the open ground of the lodge area, including the Wallowa River wetlands and adjacent uplands.”

This easement would be in place, in perpetuity, to protect spawning habitat for the anticipated sockeye salmon run, which is central to the cultural values of the Tribe. It would also protect habitat for kokanee salmon and bull trout, as well as nesting bald and golden eagles.

The map above shows the lands surrounding Wallowa Lake. Wallowa Lake Lodge and the conservation easement area are shown at the bottom of the map in yellow. 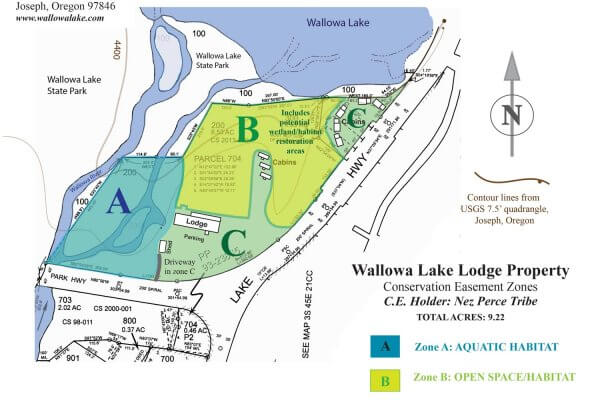 This map shows the area of the conservation easement in detail. Zone A, which includes the upper Wallowa River, is the protected area where the salmon will come to spawn. Zone B will provide wildlife habitat, especially for nesting bald and golden eagles.

The Tribe is raising the money for the conservation easement. It has so far raised $700,000, but still needs an additional $325,000. Anyone who has seen the inspiring beauty of a sockeye salmon run knows that it is a miracle of nature.

Please consider making a contribution, and helping the Nez Perce Tribe to bring this miracle back to the “Valley of the Winding Waters”. Just send a check to the following address, with a cover note specifying that it’s earmarked for the Wallowa Lake Conservation Easement (you can also note that on the check byline).