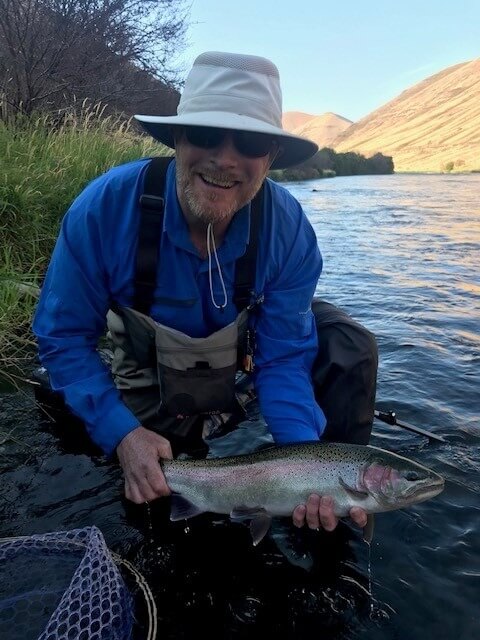 Despite the mini-heat wave in Portland, I am already seeing signs of fall, as some of the trees in our neighborhood are beginning to show their colors.  Earlier this month I visited my son in upstate New York, where we woke to a chill in the early morning air before fishing for smallmouth bass on the Black River, a tannic stream which empties into the eastern end of Lake Ontario.

Bassin’ on the JD

After returning to the Pacific Northwest, I hit the John Day for another smallmouth expedition at Starvation Lane. Inch for inch and (if I’m lucky) pound for pound, smallmouth bass are probably the hardest fighting fish I’ve had on the end of a fly line.  Although most of the ones I caught this summer were modest in size, they more than made up for it with aggressive strikes and playful acrobatics. Fly fishing for bass in late summer is a well-earned reward for the often frigid and fishless days of winter.  If nothing else, cold beer tastes a lot better in August heat instead of February sleet.  My favorite smallmouth tactic on moving water is a tandem woolly bugger rig cast down and across then stripped quickly on a tight line. If the light is good, I can often see one or both flies (my favorite colors for ease in spotting are chartreuse and white). It’s not unusual to double up, although it can be a real challenge to land both fish with barbless hooks.

Summer Kiss on the D

Of course the end of summer means steelhead season has begun in earnest.  As a relatively inexperienced steelheader, I was delighted to hook and land my first Deschutes summer fish, a vigorous wild buck with a beautiful crimson stripe.  The fish counts at the Bonneville Dam suggest another year of historically low runs for these endangered species, so I was thrilled to release a healthy unclipped fish back into the river.  Fishing partner Rick Pay also caught and released a wild fish, in his case, a chrome bright hen that jumped and cartwheeled a half dozen times before being landed.  Add in some whitefish and redside trout for bycatch and it was a fine day indeed fishing near Mack’s Canyon.

As of this writing, the White River has been mucking up the lower reaches of the Deschutes.  When the White River blows out the Deschutes, it’s anyone’s guess how long it will last, so my upcoming three day steelhead jetboat trip may be in serious jeopardy.  On the bright side, I will have plenty of time to practice spey casting with my new Loomis IMX Pro 6-weight and I’m bringing a full bottle of Jameson Black Barrel to camp.  One of those items is supposed to come home with me.

Don’t forget to RSVP for our September dinner meeting presentation by Jim Carmin, who is the Special Collections Librarian at the Multnomah County Library.  Jim’s presentation will focus on the highlights of the Ed Francis Collection of Fly-Fishing Books, which is housed at the Multnomah County Library. Jim also will talk about some features of the archives, and the most recent acquisitions made possible by members of the Flyfishers’ Club of Oregon.

I will be out of town for the September meeting due to a death in the family; however, you will all be in good hands in my absence.