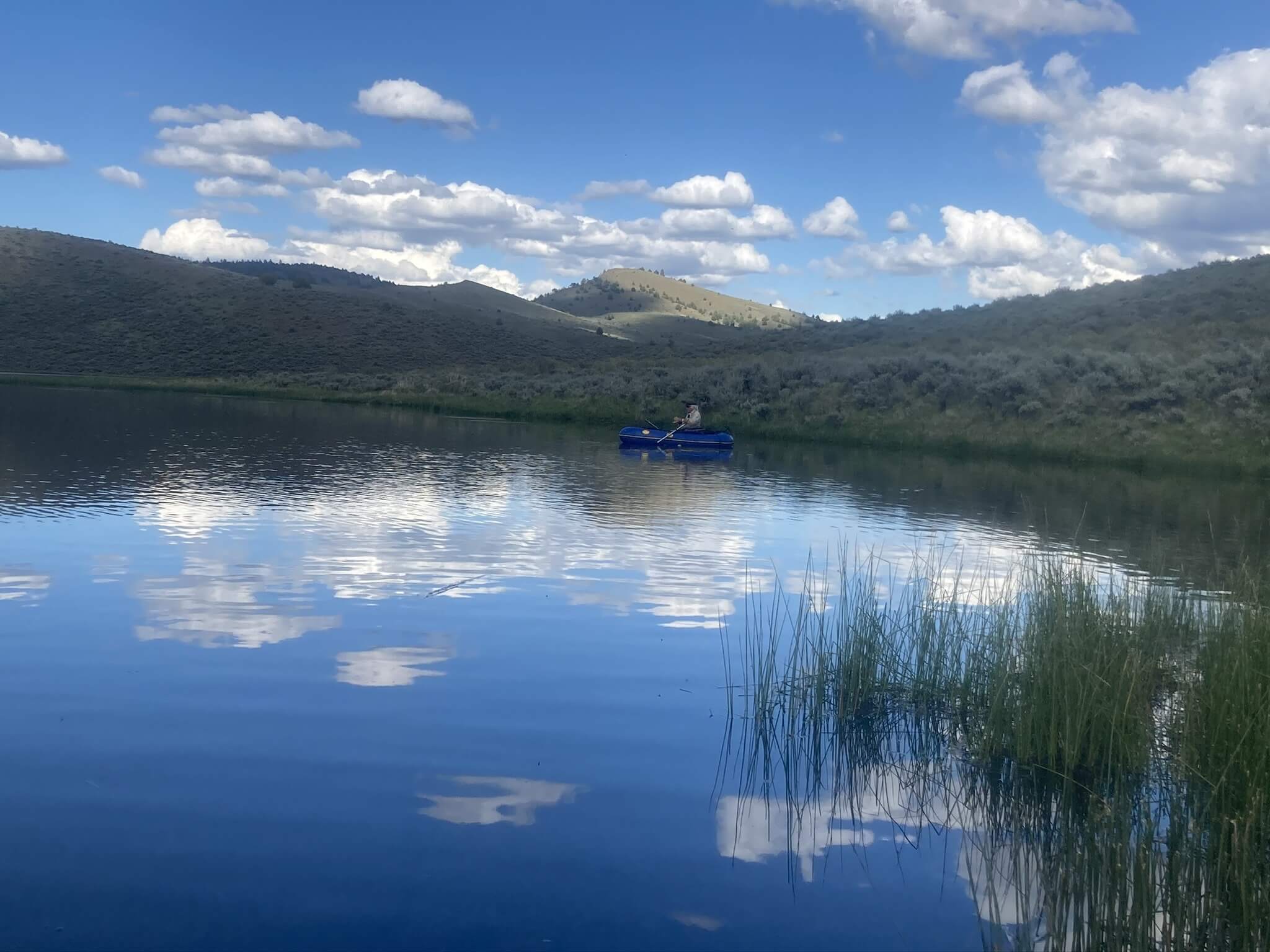 I hope you all continue to be healthy and safe as we begin the slow process of reopening businesses and starting to return to some semblance of normalcy.  Equally importantly, I hope that the spring (at times summer-like) weather has tempted you to pick up a rod and go fishing.

My first trout fishing of the year took place on private waters in Eastern Oregon.  Rick Pay and I went for a three day adventure with two non-club angling friends to Grindstone Lakes, which is about 2 hours southeast of Prineville.  There are five manmade lakes ranging from 20 to 70 acres, each with large rainbow trout.  When I say large, I mean that my smallest was about 17” long.  All of the rest were 20”-22” and some went up to 24”.  These are trophy trout and they are an absolute blast to hook and (try to) land on a 5- weight or 6-weight rod. 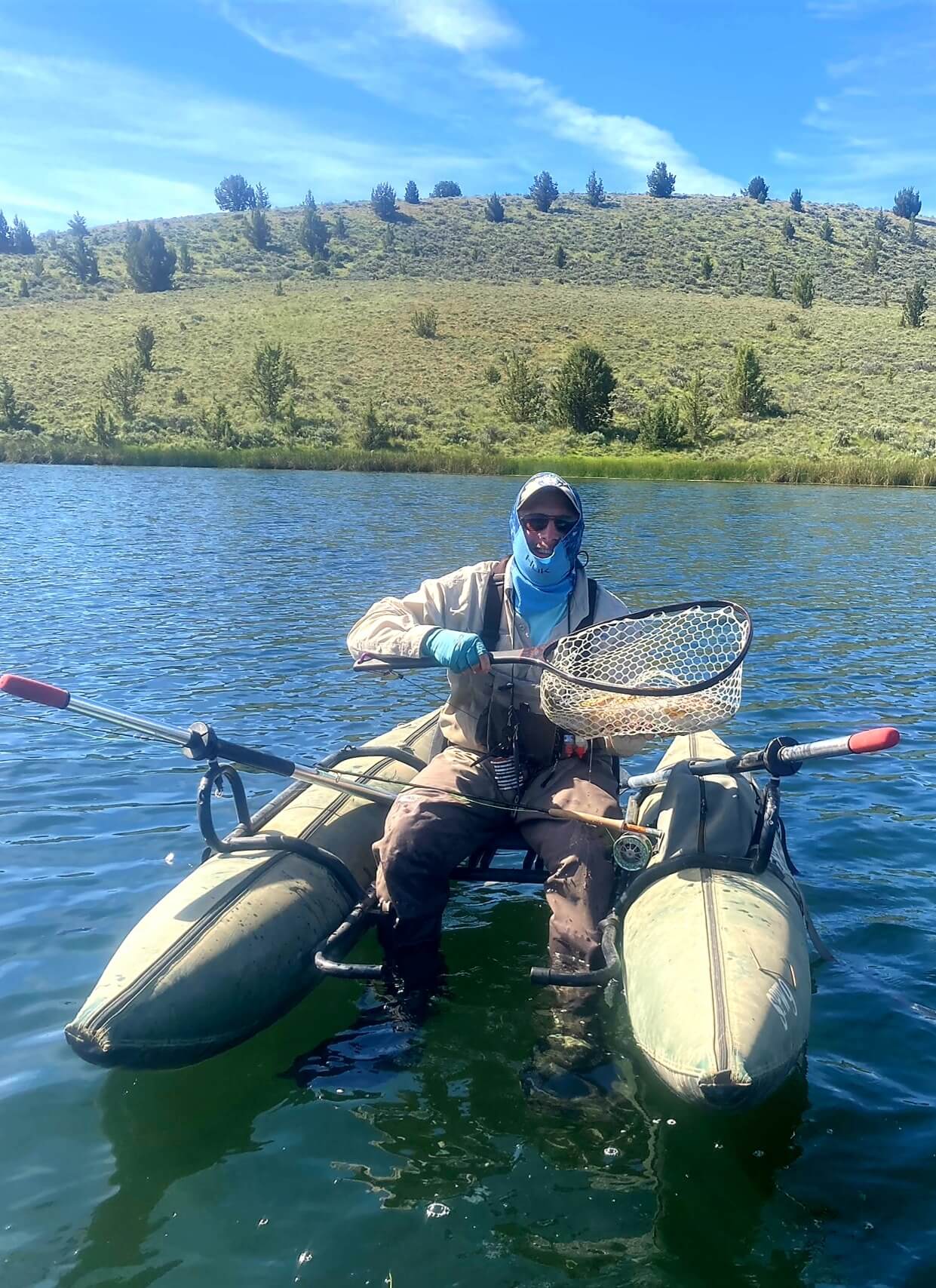 It was our first time to the lakes this early in the season, and we were led to believe that the dry fly fishing opportunities could be good.  I’m generally a low-expectations person because I like to assume the worst and be pleasantly surprised when it doesn’t happen.   But in this case, the stars lined up and we experienced some truly spectacular fishing.  We had good luck in the morning of the first day fishing in Grindstone Reservoir with a dry/dropper rig consisting of a purple chubby Chernobyl with a small nymph about 18” underneath.  Hare’s ears, pheasant tails, lightning bugs and callibaetis nymphs all were productive.  Things really went into overdrive as we were finishing our shore lunch when a dense callibaetis hatch began coming off.  At first we saw a few rises dimpling the water, then a few turned into a lot and the rises quickly got more aggressive.  Fins and tails started showing and by the time we wolfed down the last of our lunch there was a veritable frenzy of enormous trout wreaking havoc on the bugs.  I couldn’t bear to take the time to get back in my float tube and paddle out so I grabbed my rod and started casting right from shore.  It’s pretty amazing when you are marking nearly a dozen behemoth trout splashing so hard that your fly is being rocked by the wakes of their rises. The first one I hooked went on a screaming run directly away from shore and took me well into my backing before I was able to bring it to the net.  And so it went, with a pretty even split of eats on the big chubby and the little nymph. 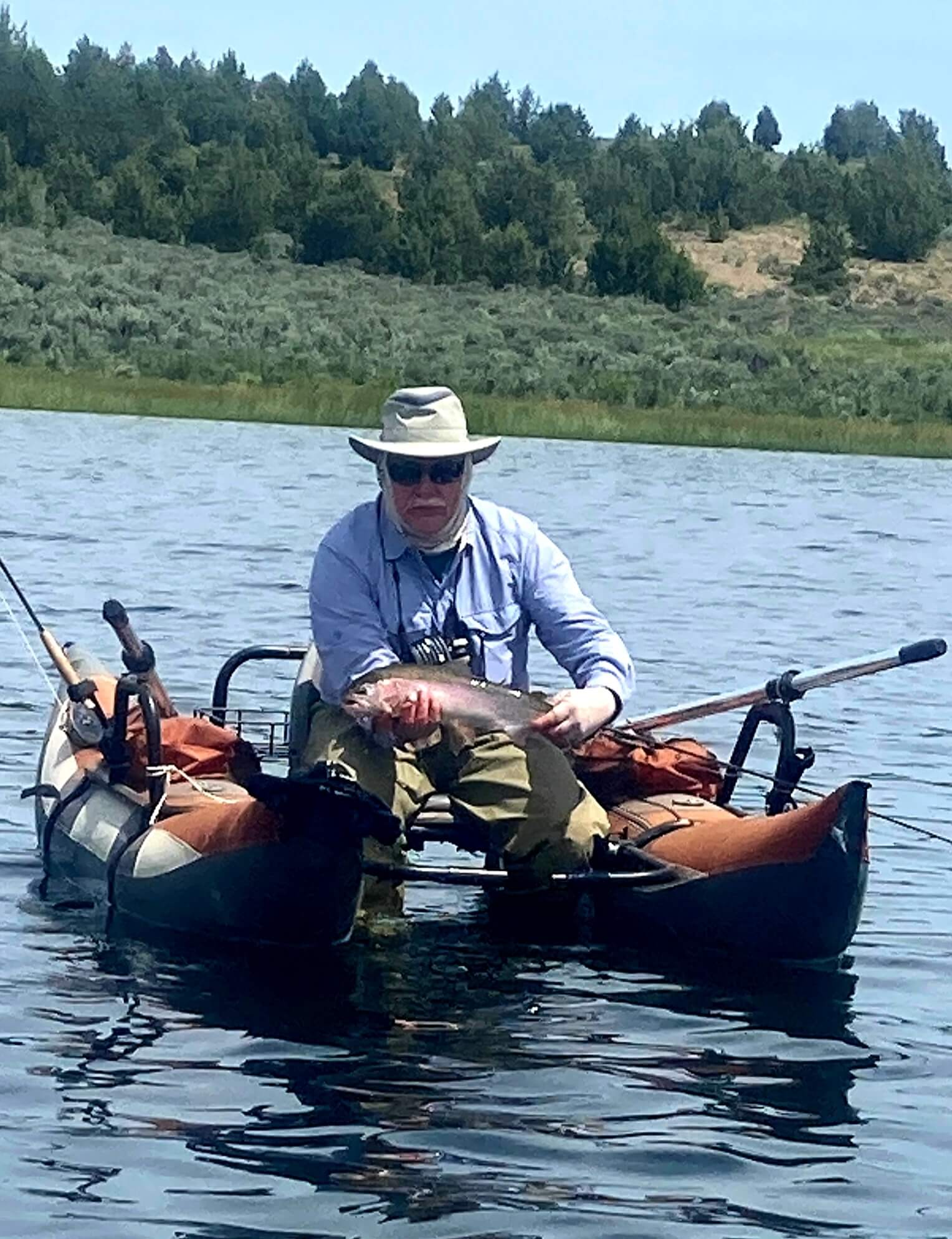 Rick Pay with a Nice One

The next day we fished Black Snag lake and cast damsel nymphs in the shallows, using a slow steady strip to work the fly.   The takes ranged from subtle to explosive and the fish were all fat and strong.  Good times.  Later in the day the callibaetis nymphs came off again and it was back to the dry/dropper rig.  I was fishing in a small shallow cove and seeing lots of rises but not getting the hookups I was expecting.  Our guide Neal Burrell suggested shortening the dropper to about 12” and that made all the difference.  My first fish in that cove exploded into a cartwheeling series of jumps before taking off on a blistering run that took me deeper into my backing than the day before.  It jumped again at least 150 feet away from me then it was gone.  I reeled in and found that the trout had broken off on 3X tippet.  I re-rigged with shaky hands and it was back to the fun for at least an hour and a half of action.  The hatch was so prolific that I had to keep my buff on to avoid inhaling bugs. This time, all the eats were on the nymph. 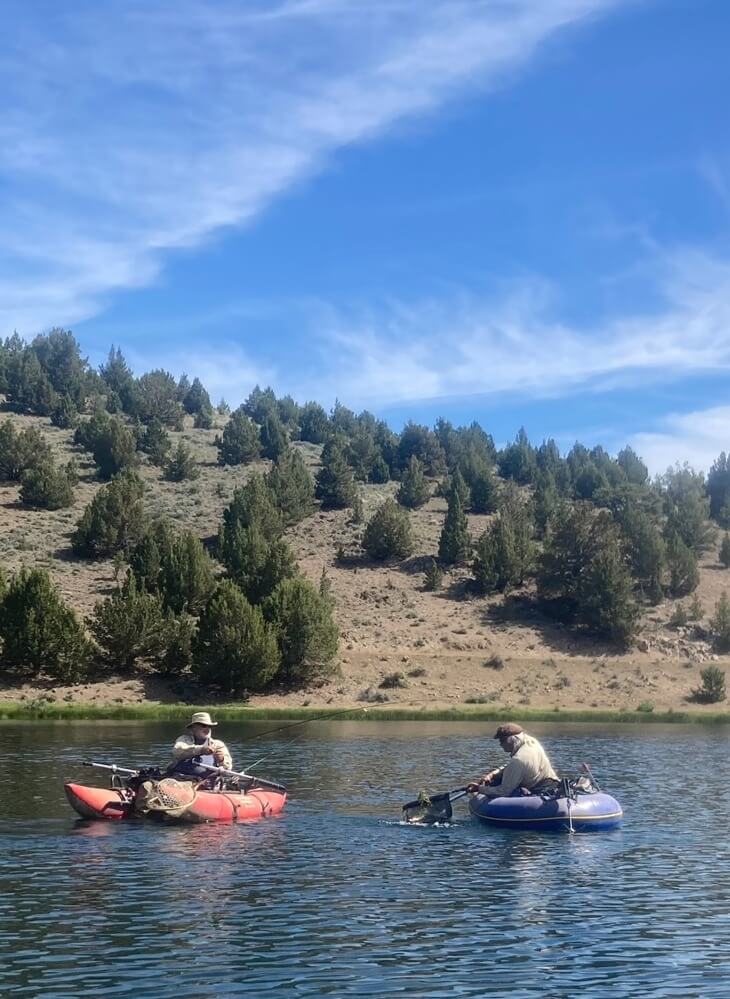 What Comes Up Must Go Down

The final day looked promising with a high overcast so we were greedily hoping for a third day of surface action at Buecher Lake but it was decidedly slow.  A few trout were caught on dry dropper rigs, and a few more were picked up trolling wooly buggers but they were few and far between.  Conditions looked great for another hatch but the bugs weren’t forthcoming, so Neal suggested hanging a balanced leech under an indicator.  Soon enough it was “bobber down” time as each of us began to catch fish.  Buecher Lake is stocked with fewer fish, but they tend to run even bigger.  Virtually all of the ones we caught were over 20” and deeper in the belly than the other lakes.  As with all trips, this one came to an end too soon, but the sadness of having to leave is offset by the fact that we have booked the same dates for 2021.

I have a few other trips coming up including a few half day trips for shad fishing at Willamette Falls and a return to the Grande Ronde (conditions permitting – the river is racing along at over 8,400 cfs as I write and it doesn’t fish well above 5,500 so we shall see).  I hope that you all have a few outings to look forward to. Here’s to hoping that the Covid-19 restrictions have relaxed enough to allow our scheduled club trip to Laurance Lake happen later this summer.

Our June 9 dinner meeting is off but Mike Radakovich is working on another Zoom presentation.  Details to follow.

Tight lines until we meet again!