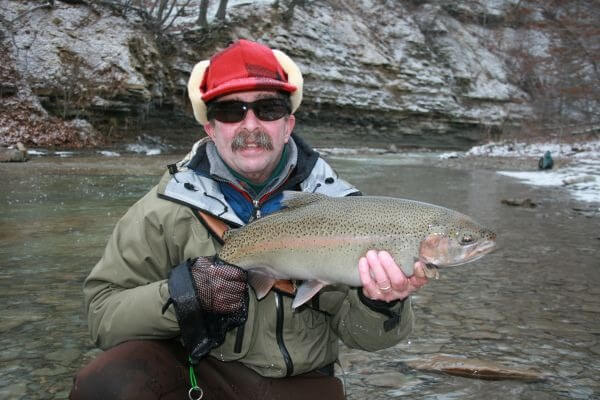 Editor’s Note: Our dear non-resident member, Dr. Barry Mayer, is a rich source of FCO history. He recently sent me these memories of members, bamboo rods, and of course, fishing! This month he talks about his introduction to bamboo rods and his first rod made by the legendary Walton Powell. If Barry’s words bring forth memories of your own, please consider sharing them with your fellow members. Reach out to your Flyline editor and I will be happy to help you put your memories to print here in the newsletter. Thank you! LKH

Walt, Make Me a Rod

Walton Powell brings up many memories of the past and is associated not only with Ed Hartzell (see August 2019 Literary Angler) but certainly with John Eustice. John often invited Walton to come to Portland to visit with him and usually made it to the FCO meeting. He was the speaker on a number of occasions. As John and I were good friends I was sometimes included in the conversations. I knew nothing about bamboo rods at the time but I had Walton make me what I thought was going to be a fine trout rod. He called it the Hexagraph, a concept he developed with Bruce and Walker of the UK, a graphite rod that was made of six splines like a cane rod and not hollowed. Having only fished fiberglass and graphite I had no understanding why bamboo trout rods were 7 feet to 8 feet long. Accustomed to fishing 9 foot graphite rods and conscious of being altitudinally challenged I asked him to make me a Hexagraph that was 9 feet 3 inches long. He asked me if I was sure that was what I wanted. I said sure and he made the rod. Graphite and other tubular rods are just that, tubular with hollow centers. I didn’t realize that the Hexagraph was solid graphite and what that would do to the weight! Most of the ones he sold were in the shorter lengths.  It was really heavy and even more unwieldy because of its length. I don’t know why he hadn’t thought of hollowing it. His father E.C. Powell had been a pioneer in hollow building cane rods. That rod is probably somewhere in the Portland area since I donated it to the FCO auction sometime in the mid or late 90s. 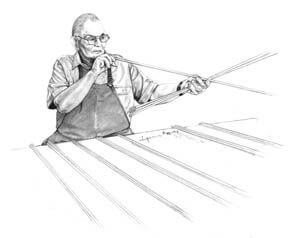 Bamboo and the Silver Screen

Walt’s connection with A River Runs Through It (1992) is mentioned in the links below. The bamboo rods that were used in some of the scenes were 8’6” Grangers refurbished by Bob Taylor. He was a rod builder for Thomas and Thomas and for H.L. Leonard in his early days. He lives in the Catskills and still makes rods in his own shop. I get to see and hang out with him every year at the Catskill Rodmakers’ Gathering there. He’s a fine, modest gentleman. The bamboo rods didn’t hold up in the scenes when they were shadow casting that puts a great strain on a rod. Several Grangers were broken. The other rods in the film were Hexagraphs from Walton Powell I believe. They were up to the stresses of the trick casts, which incidentally were done by Jason Borger.

Walton didn’t believe in a rod for a single weight line. His concept was that it depended on how much line was out beyond the tip of the rod. I have one of his Dual Helix rods that is 8’6” for 4-5-6 wgt lines. It is a 4 piece and has some history with the FCO. Phil Trautmann was FCO president in 1978 and 1979. Some time in the early 90s he called to ask whether I had a pack rod. Turns out he was going to New Zealand  where he knew there were open positions for adolescent psychiatrists which was his game. He had served in Viet Nam and when he was discharged he and his wife had several months before he had to report for his residency. They met in New Zealand and fell in love with it. They fished, hiked  and did a lot of bird watching. Now that he was at about retirement age they thought they’d like to go back. John Eustice said the Dual Helix was one of Walton’s finest tapers and glowed telling me how lovely it was to cast and how versatile it was. You only needed one rod instead of 2 or 3 on a trip where you might encounter a variety of fish in a variety of waters. I was delighted to be able to offer it to him. He did take it with him and was gone about a month or so as I recall. When he came back, he had accepted a position on the north island at Lake Roturoa and admitted he hadn’t taken the rod out of its case. He had  been so busy interviewing for various positions he never got a chance to fish.

If he is still alive I believe he is still there (Yes Barry, he is alive and well! See Phil’s brief update in this month’s Member Matters). I kept in close touch with him after relocated. He said he fished every day before work, mostly on the lake but also in some of the many tributaries on the east side near where he lived. Sadly his wife died suddenly several years ago. I waited a month or two and called and spoke with him about it. He was able to tell me what had happened. Apart from her warm and charming personality, they had a relationship any couple would envy. So sad.

On a combination genealogy, fishing and sightseeing tour to Scotland  some years ago with my wife, I  took my Powell Dual Helix and did do some trout fishing but never hooked a fish. I had read about Alistair Gowans the author of the salmon fly Allie’s shrimp and looked him up when we stayed overnight in Pitlochry. He is a giant in fishing in the UK http://www.letsflyfish.com/  and a real gentleman. He invited me to his home where we had a genial evening. He had a rod to test for Loop, a Swedish rodmaker that he wanted me to try. We went out into his “garden” and cast it. He was able to cast the whole line with one backcast. I told him I had a trout rod in the car, my Dual Helix. He said he’d like to try it. After a few casts he said, “This is a mighty odd feeling rod.” After a few more casts he added, ”But I like it!” A few years later he visited with us in Lake Oswego with his wife Moira. We had a great couple of days. I arranged a trip on the Deschutes with John Hazel. Jay Beckstead met us in Maupin and we drifted from Pine Tree to Mack’s. We were all amazed at how much river he covered with his two handed rod casting overhead. We only got one fish that day and it was Jay’s. 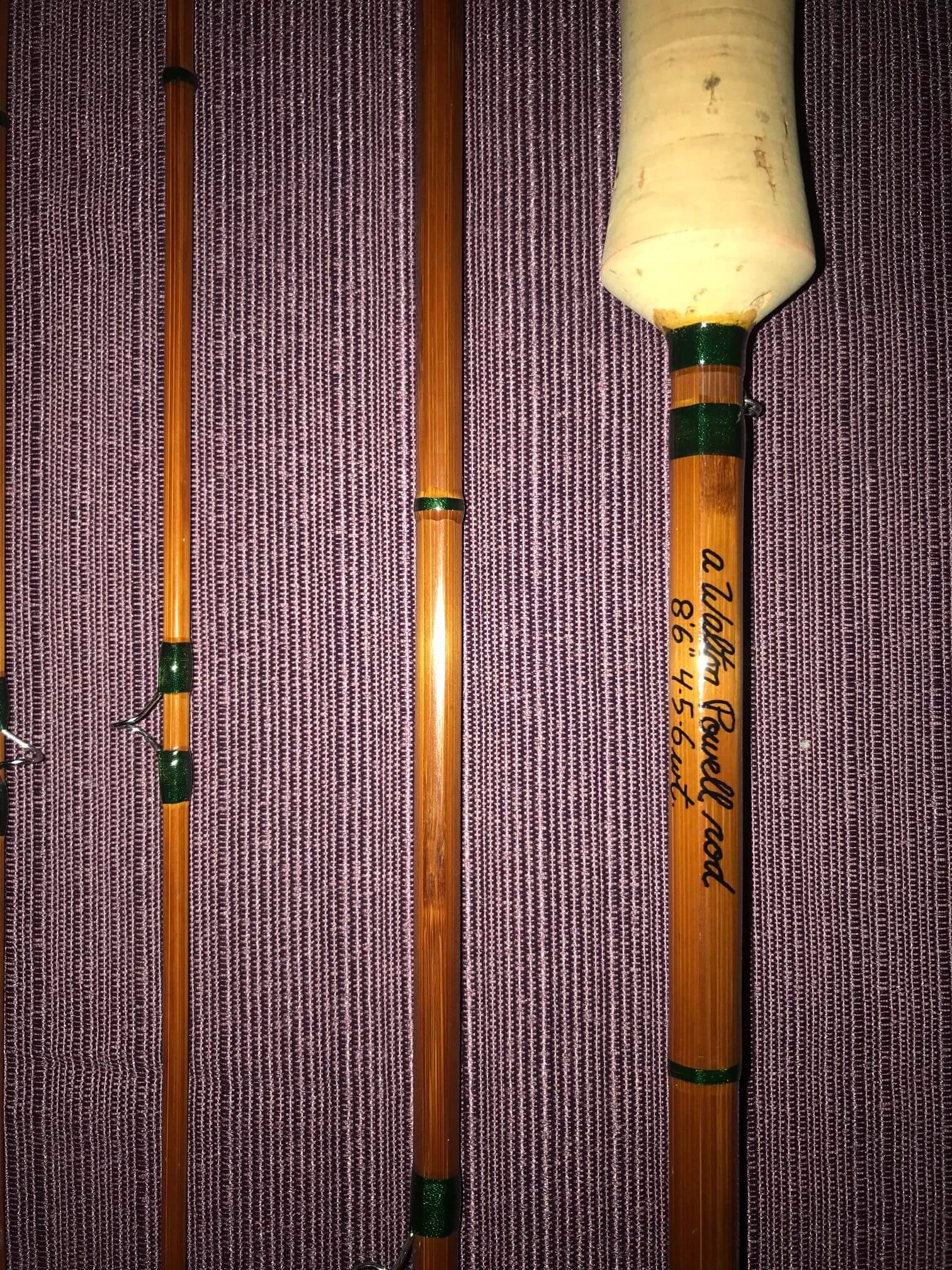