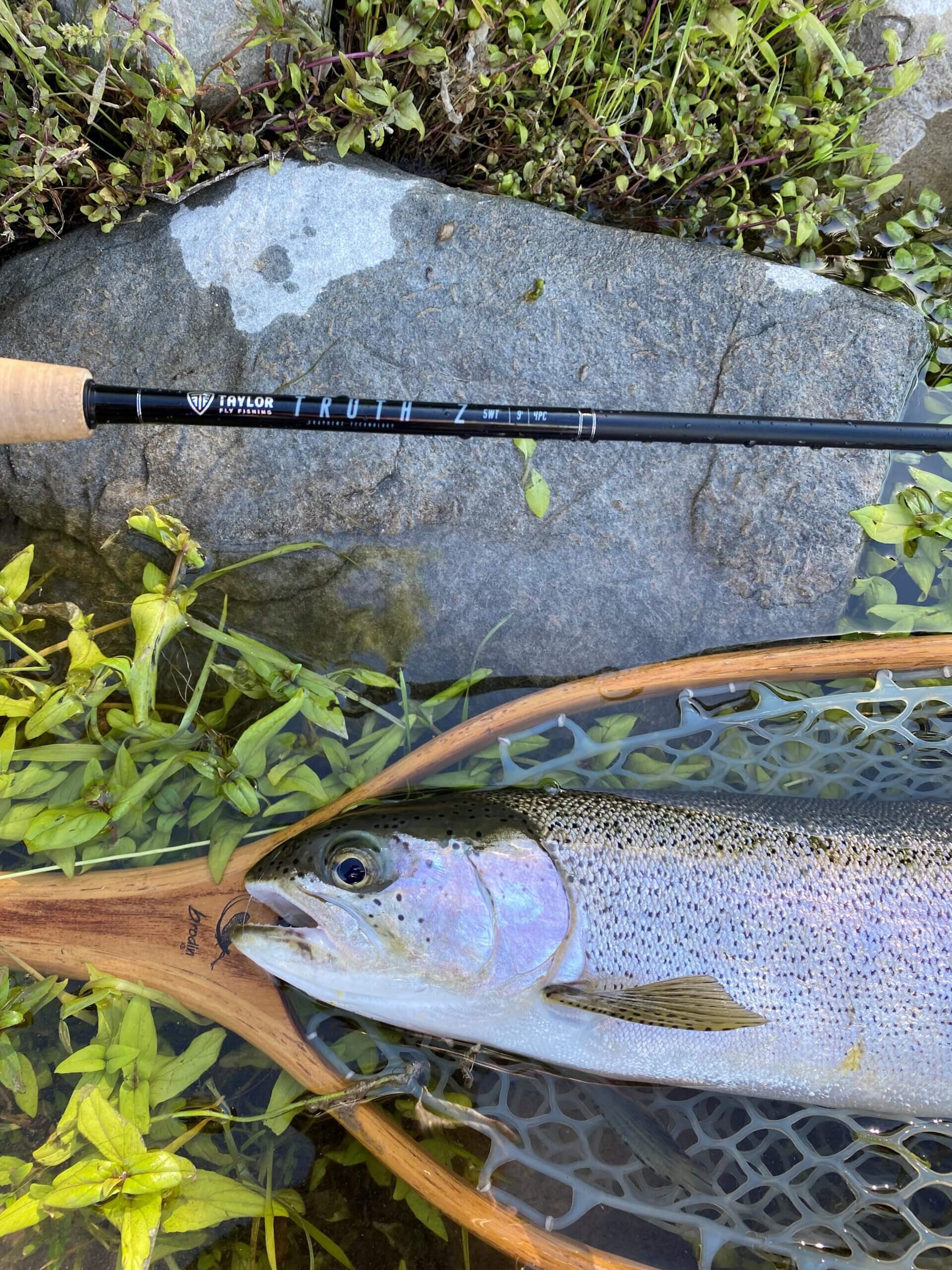 Editor’s Note: Club member Jay Spassov offers this brief exploration into small and perhaps little known rod companies in his first submission to the Flyline. Historically, the Flyline and The Creel have included pieces on reels, rods, and rod makers (for example, see ‘E.C. Powell, Angler and Rod Maker: A Tribute’ by Lee Richardson in your copy of The Creel: 60th Anniversary Edition). Your Flyline editor welcomes these occasional diversions from the rivers, lakes and oceans to the tools of the sport we hold dear. LKH

Sage, Loomis and Scott are the trout rods I have favored over the years. However, in recent years I have been made aware of some small new companies that are producing state of the art premium rods with sophisticated design that rival, and in the opinion of some, surpass the the major U.S. brands. Furthermore, their price point is substantially less. I would bet that most anglers in the Paciﬁc Northwest have never heard of any of them.

Taylor Rods and Reels is a small New Mexico based company. Epic, is another small company, out of New Zealand and Stickman Rods are produced in Hungary. I found out about these rods by reading reviews on the North American Fly Fishing Forum. There are a number of knowledgeable anglers within the membership who own, ﬁsh, and write about these rods. Reviews and discussions of the previously mentioned big name companies are also blogged.

My close friend and long time Montana/Idaho trout ﬁshing partner, Richard Franklin (moniker SweetandSalt) of NYC, is one of the main contributors. Richard is a highly skilled ‘dry ﬂy only’ trout guy and also sight ﬁshes for saltwater species avidly. He was in the ﬁshing industry for many years, but is now a retired ﬁshing bum. Through his connections in the industry over the years, he now is given rods which he voluntarily inspects, casts, and ﬁshes for his design input and reviews. He has no ﬁnancial afﬁliation with any company.

The main reason these rods are available at a lower price is that the blanks are not produced in the U.S.A. Many may eschew them for that reason, thinking that any Asian made rod is inferior compared to our major brands here. However, they are not mass produced in China. Taylor and Epic blanks are rod designed by the brilliant American rod designers. Then the blanks are rolled in a South Korean shop by very talented craftsmen and shipped back for inspection and completion. Beulah, Loop, and Hardy are a few other better known companies whose blanks are also made in South Korea.

My trout ﬁshing kit historically consisted of Sage Ones and Scott Radian 4 through 6wt. rods, until I purchased a 6wt. Taylor Anomaly Z with matching Taylor reel two years ago. It quickly replaced my Scott. It’s a very light, medium fast rod with ultra fast tip recovery speed. It feels like a 5wt. but has the power of a six. I believe the use of graphene gives it the light feel. It is a fantastic dry ﬂy technical presentation rod, but also performs well as an all around trout rod in both river and lake applications.

The Taylor Truth Z, a fast 9ft. 5wt., was acquired this year and accompanied me to the Missouri River, serving as my go to rod to match the PMD hatch. My long time favorite 5wts, Sage One and Sage Method rods, never made it out of the travel tube. I just couldn’t put the Truth down it was such a joy to ﬁsh. It’s not as fast as the One and no where near the Method. So, it lacks any stiff feel and it’s lighter (graphene infused), smoother, and just plain fun to ﬁsh. I have posted full reviews of both rods on the previously stated ﬂy ﬁshing forum, under the moniker, “Dillon.”

I can’t offer any ﬁrst hand ﬁshing or casting experience about Epic or Stickman rods, but frankly after what Richard and other owners have written about them on the forum, they may be even better than my Taylors. The Stickmans are simply raved about as the ﬁnest trout rods available.

Most anglers, will not purchase a rod without casting it ﬁrst and rightfully so. It’s great to walk into your favorite ﬂy shop, test cast a rod, and make to purchase locally. I’ve cast the new Sage R8 5wt. at my nearest shop and it felt great. I’ve also cast a Loomis Asquith and it is superb. Taylor, Epic and Stickman rods are purchased online directly from the company., However, they offer a full money back guarantee if they don’t meet your expectations. Taylor’s guarantee is within a 30 day ﬁshing/casting trial period. I’m not sure about the others but the information is available on their web sites.

So, that sums up my thoughts and experience on premium ﬂy rods. If you’re thinking about a new one you might want to check out the North American Fly Fishing Forum while doing your research. Or, if you’re happy with your old tried and true, there’s nothing wrong with that. It’s probably going to catch you just as many ﬁsh, even if it costs far less than a premium rod. However, to me, ﬂy ﬁshing is not all about the catching – it has a lot to do with the casting too. When one trout ﬁshes the dry ﬂy and spey casts for steelhead the joy of the cast really does count… 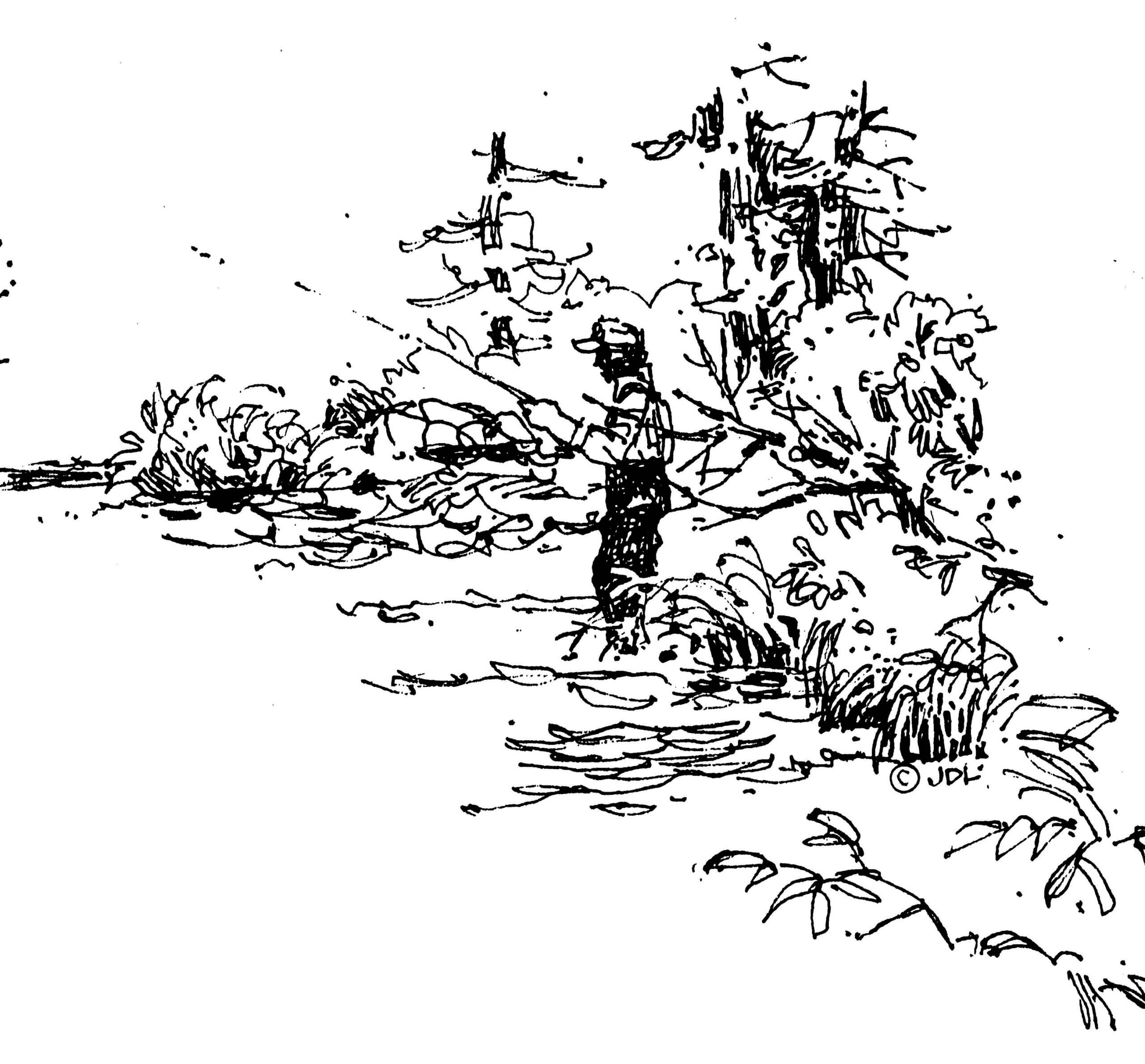 Wading and Watching by Doug Lynch