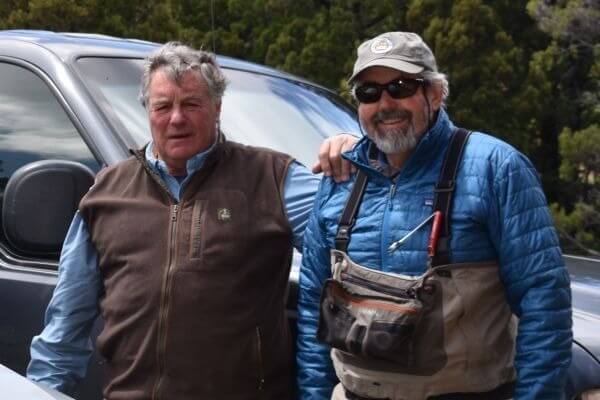 At the December meeting, I mentioned that I would not be attending the January meeting as I would be in Argentina at that time, but that I would give a full report on my return.  Normally I am not one to speak or write about my fishing experiences for public consumption, unless asked, and even then I do so reluctantly because as I’ve grown older  I don’t seem to have the need to blather on about my seeming accomplishments or sublime experiences etc.  We all have them.  However in this case I wish to make an exception, because on the recent trip I spent five days in the company of a remarkable Argentine (that’s what they call themselves, not “Argentinians” as I used to refer to them) who in turn has a long history with the Flyfisher’s Club of Oregon and many of its members, past and present.  I must add to my introduction to this piece with a disclaimer that the following is not presented as the absolute God’s-own-truth.  It is a synthesis of conversations I have had over many years and recently, colored by what may be the misapprehensions of my acquaintances and  my own faulty memory, which is bad even for more recent events. I’m taking a bit of a risk putting this out there when many clients of the lodge I visited are still around and know the proprietor better than I do; but then they haven’t exactly recounted their knowledge in the annals of the FCO either.

Born to a family which made a handsome living as Italian-Argentine immigrants making prosciuttos in Buenos Aires, he appears to have quickly learned the life skill of taking advantage of his good fortune.  His father was a well-known polo player, and he became one as well.  He was on the Argentina national alpine ski team, and for a time taught skiing in Squaw Valley, California.   He is a pilot.  He has a gourmet palate, excellent taste in wine particularly with regard to the local vintages, and like most Latin men, a great appreciation of women, with some caveats.  While having coffee and drinks after dinner one night, he told me and my wife with complete sincerity that (I paraphrase because we were too taken aback to remember his exact wording) “After fifty women seem to lose much of their attractiveness.”  We challenged him on this, but had to back off as it was apparent that he was not going to be persuaded otherwise.  In fact it is not likely that one will change Jorge’s mind about much.  He seems to know everyone who’s anyone in Argentina and the angling world.

Somewhere along the line, he married a woman with land in Patagonia along the Rio Carrileufeu in the town of Cholila in the province of Chubut, three hours south of San Carlos de Bariloche, and there in the early 1980s he built a lodge to offer accommodation and guiding to fly anglers. 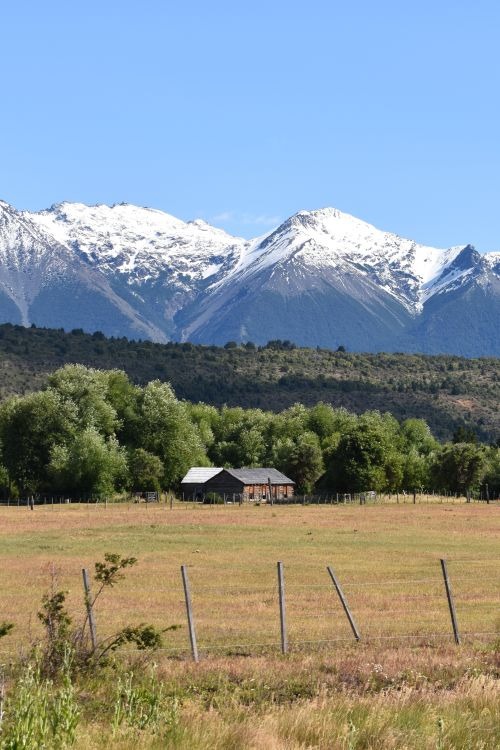 Until that time, Cholila was in part noted for the presence of a cabin, still standing, that was owned for a time by Butch Cassidy and his partner Harry Longabaugh prior to their having to flee to Bolivia. A natural entrepreneur and organizer, Jorge expanded his business quickly and  at one point he ran or was affiliated with as many as five lodges in Patagonia and Tierra del Fuego.  He claims with no reason to doubt him, that most of the guides working in Patagonia were either trained by him or by guides he trained. I witnessed this, with Jorge on the oars of our boat, when we had a chance encounter one day with a guide Jorge had trained, who was escorting one of Jorge’s former clients (“from New York and Connecticut,” as he put it when asked where he was from).  Jorge made both of them squirm in a charming way, and later told me he was delighted that I was landing a large rainbow as we came around the corner to where they were having lunch. 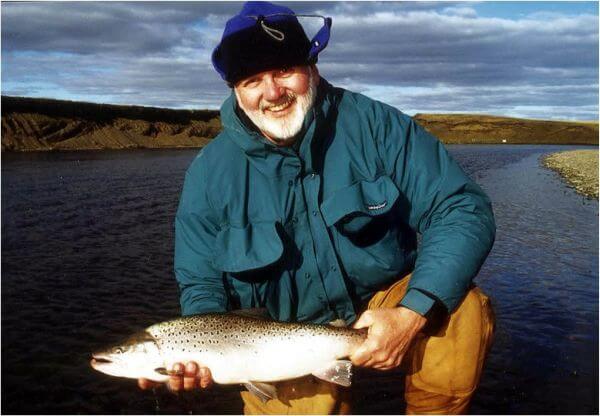 Although most of his clientele were Argentines, he developed relations with several American fly fishing travel agencies, including that run by our own dear departed John Eustice (FCO president 1992-94) along with his then-associate Tim Purvis. Their business had an early focus on South American fly angling, and as a result, a number of Oregonians and FCO members found their way to Jorge’s lodges, including my friends Jim Van Loan, Robert Sheley, Keith Hansen, Steve Bukieda, and undoubtedly many others that I don’t know of or recall, and of whom Jorge’s memory also fails him.  Jorge has been a frequent visitor to Oregon to this day, including participating in some of the early Pinot Noir Conferences at the Steamboat Inn, and in September 2000 John Eustice arranged for him to speak to the FCO monthly meeting.  The 80’s and 90’s were said to be a golden age of fishing in Patagonia, when it was still relatively undiscovered; “like Montana was fifty years ago,” and after Jorge’s talk I resolved to someday visit there.  Alas, one of my life regrets is not taking the opportunity to do so when John was still around to help with the arrangements and perhaps even accompany a group.

The opportunity to somewhat rectify this situation arose because at the April 2019 Native Fish Society Auction, one of the items was “Fly Fishing Patagonia!” or something like that.  As the bidding progressed, and not having read the fine print, my lovely wife of nearly forty years suggested that such a trip would be a wonderful way to celebrate our decadal anniversary in 2020.  Part of the attraction was that the hosts of the stay in San Carlos de Bariloche were children of some friends of ours from Camp Sherman.  After a few glasses of wine, and not initially realizing that we were bidding against friends and table mates Felton and Karen Jenkins, who was I to argue with such a proposal?  We slipped in a bid which Felton declined to top, and won the package.

Some time later, we realized that we had bought a hosted four-night stay in Bariloche including three days of guided fishing which, while wonderful, would not in itself be nearly enough time in the country to warrant the expense and difficulty of travel to Argentina.  So we tacked on each end of the trip some time in Buenos Aires, and a visit to Iguazu Falls National Park (highly recommended if you go to Argentina) and we began a rather late search for additional fishing in Patagonia. Because of our limitations of time, it became apparent that most of the well-known lodges were booked during the time we could be there.  Somewhat desperate, I reached out to FCO member, friend and fly fishing travel agent Jerry Swanson.  Jerry has been to Patagonia several times, knows Jorge well enough to ask for favors, and saved the day by getting us 5 nights at Jorge’s lodge. I had naively assumed that Jorge, who was no spring chicken at the time of his FCO visit in 2000, would no longer be in business.  Was I wrong, and thanks, Jerry!

Returning to my purpose, this article is intended to celebrate a unique individual in the annals of fly angling and the FCO, so I won’t expound on the fishing, which was fine. While at Jorge’s lodge “Arroyo Claro,” we had rather bad weather for the equivalent of July in Patagonia, but did well on streamers with some combination of large brown, rainbow and brook trout caught every day, though not in great numbers.  The remarkable thing was that Jorge opened his lodge to us despite the fact that he had no other guests during the time of our stay.  This gave us the opportunity to experience Jorge Graziosi as perhaps few other clients have. 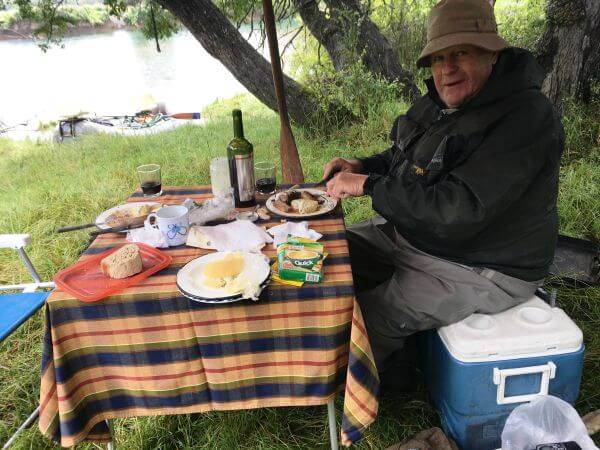 Warm and dry with hot chorizo and blood sausage during a downpour.

He dined with us every night, guided me in his 16 foot Avon raft every day, cooked a hot streamside lunch every day (once under a rain fly he erected with rope and oar) and in typical Latin fashion was supremely solicitous of my non-angling wife Marie-Louise. 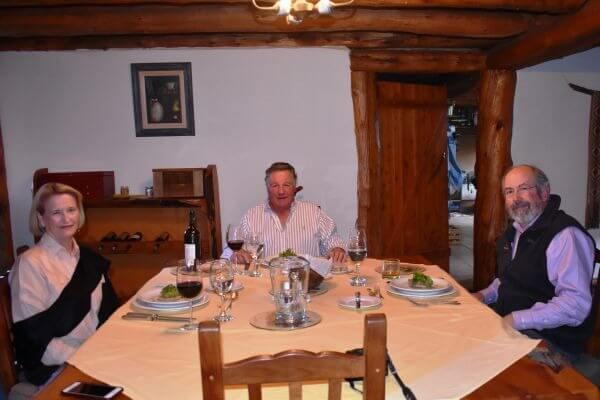 He dressed for dinner in a crisply ironed shirt, supervised the progress of the meals prepared by his skilled chef Ellie, and kept the wine flowing. He arranged for Ellie to prepare a lovely cake for M-L’s birthday which occurred while we were there, and arranged for a handsome young gaucho who spoke little English to take her on a several-hour horseback ride up the scenic hill on which the lodge is constructed, during a break in the weather one day.  All for the same price that, while not inexpensive, we would have paid if there were the twelve guests that the lodge is capable of accommodating.  I attribute all of this to Jorge’s respect of the FCO and his friends who have visited, and of course to Jerry Swanson’s relationship with him.

A few final words about Jorge’s lodge, the early FCO experiences there then vs. now, and the “mature” version of Jorge.  As time went on and he became less enamored of running an expansive operation, he scaled back his business.  Ultimately, he lost the first lodge he built, the one most FCO people would have stayed in prior to 2006 or so, when he and his then wife who owned the land, divorced.  It is now a B+B run by his ex-wife, with no fishing connection. 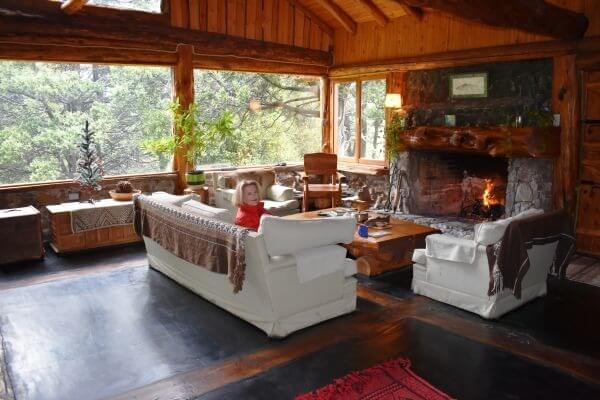 Fortunately, he retained a nice parcel of twenty or so acres up the hill, and he marshaled local craftsman to harvest trees on site, mill them into lumber which was then used in construction and furnishing, and incorporated some nice stonework in the design including a spectacular fireplace.  It opened in time for the 2007 season.  He describes it as rustic, but I warned Marie-Louise not to think that the other fishing lodges I have stayed at are like this.  It is quite special.  I’m sure there some Patagonian lodges which are “Orvis-endorsed” or the like which may rival Arroyo Claro in amenities or splendor, but none could compare in personality or uniqueness.  I highly recommend it.  There are many options for fishing within an hour or two of driving, including overnight trips on more remote rivers.  All are beautiful, and while you will see other anglers, it does not come close to crowded. 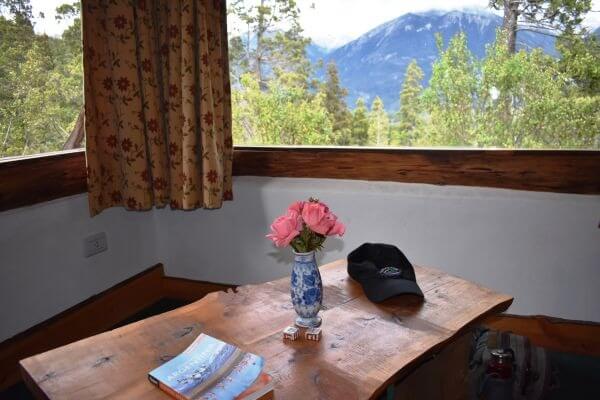 View from our room.

The new lodge reflects the vision and personality of its owner and designer, not only in appearance but in the way it is run.  Jorge, having earned the respect of the angling world with his forty-year career and experience as a provider of the Patagonian angling experience, is at this point content to continue as a bit of a boutique business.  He has no web presence, and works mostly through word of mouth and only a few agents. Most of his clients remain Argentines.  As a result, he may not be everyone’s cup of maté if all you are looking for is a lot of fish and some food at the end of the day.  He truly prefers clients who appreciate his outlook and experience, and he seems to have enough of them to satisfy his business needs. I can vouch for the fact that if you can open your view to the mature perspective of a legendary Patagonian outfitter, the experience is rewarding, especially as an FCO member who appreciates club history.