Editor’s Note: When out on the water, FCO members always seem to find a bit of levity along with the fish! Your Program Chair, Ross Beatty, sends this report from the recent Goose Lake Club outing. He reveals secrets for success on the lake along with John Pyrch’s latest technological breakthrough on float tube power. LKH 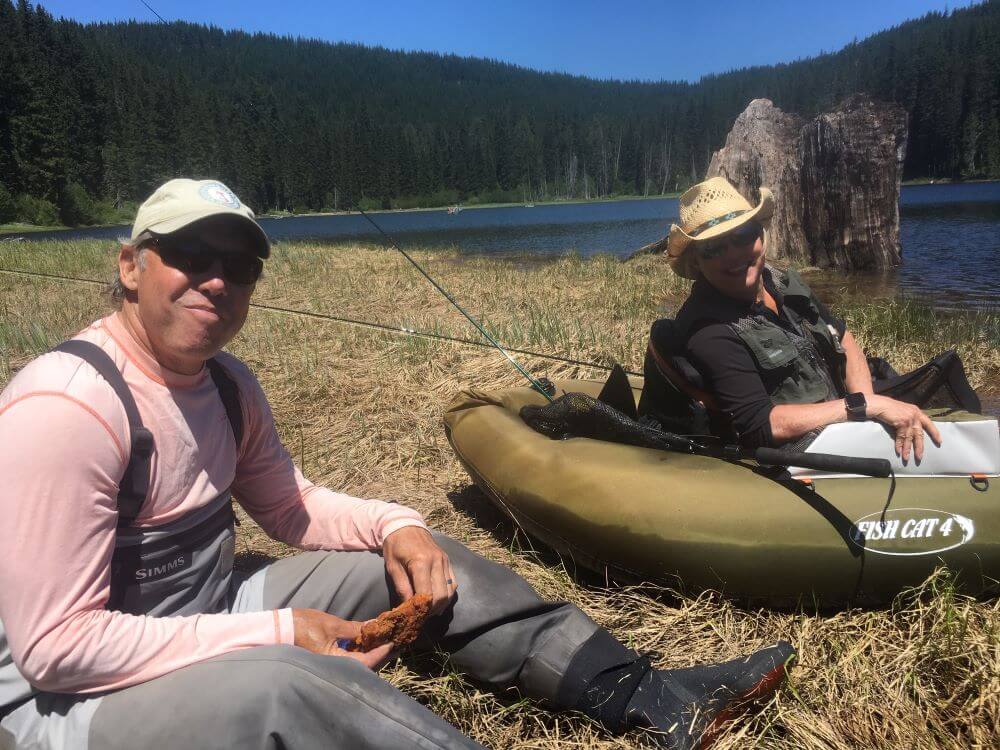 On June 15th club members Jim Hillas, Rick Pay, Steve Wilhite, John Pyrch, Teri Beatty, and Ross Beatty gathered at Goose Lake, near Mt Adams, for a day of fly fishing. The lake contains four species of trout, Cuttroat, Rainbow, Brook, and Brown. While everyone was gearing up in the parking area, Ross put a beer on the line for anyone who achieved the “slam” by catching all four species. With rods rigged and ready, the group headed out in float tubes and pontoon boats to make their assault on the lake’s trout.

It was a beautiful sunny day, and the lake was busy with kayakers and SUPs, in addition to other fishermen. But everyone was courteous, and the crowds didn’t detract from the fishing. In fact, the fishing was on fire. From the moment our group got on the water until we packed it in in the afternoon, rods were constantly bent. Most of the fish were cookie cutter 12” Cutthroats and Rainbows, but a few fish pushed the 15” mark. Almost everyone caught three of the four species that make up the “slam”, but the Brown trout were elusive, and Ross’s beers remained safe.

Most of the fish were caught fishing deep with sinking lines. The hot flies were Carey Special, Black Mini Leech, Black Carlton General, and Black Slumpbuster. In the morning a slow retrieve seemed the most productive, but in the afternoon they liked it faster. Unfortunately, a constant breeze put down the dry fly fishing, but Teri Beatty was able to entice a few rises using a Parachute Adams near the submerged island in the middle of the lake.

We all gathered for a shore lunch around 1:00 p.m. to share our stories. John Pyrch was the last to arrive, whereupon he showed us a rather unique propulsion system for his float tube using two cutting boards from the dollar store as paddles. It a nice break to sit on shore, basking in the sunshine, with the comradery of other members. You can expect more of the same on July 20th when the club has an outing to Laurance Lake above Hood River near Mt Hood. 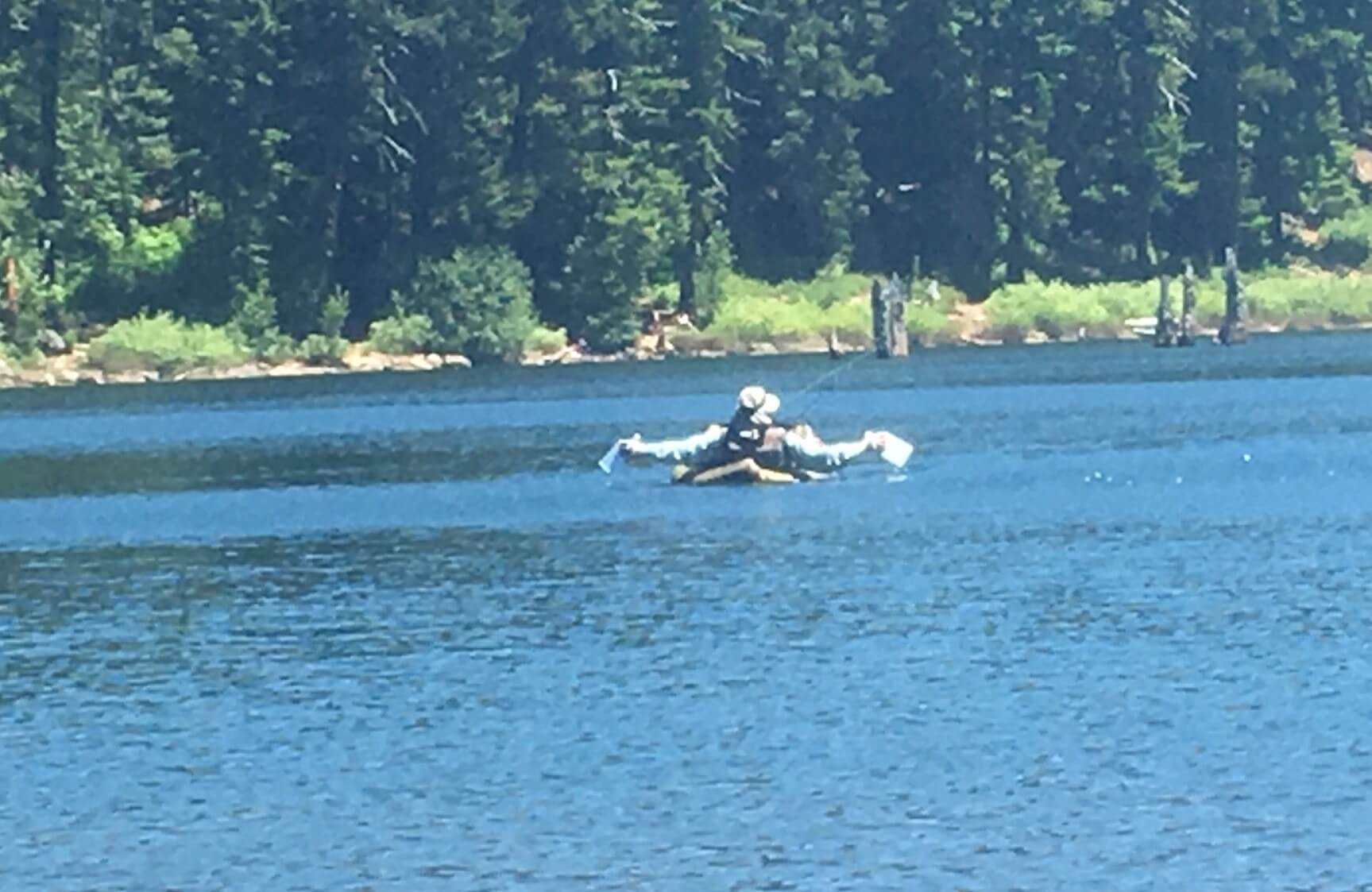 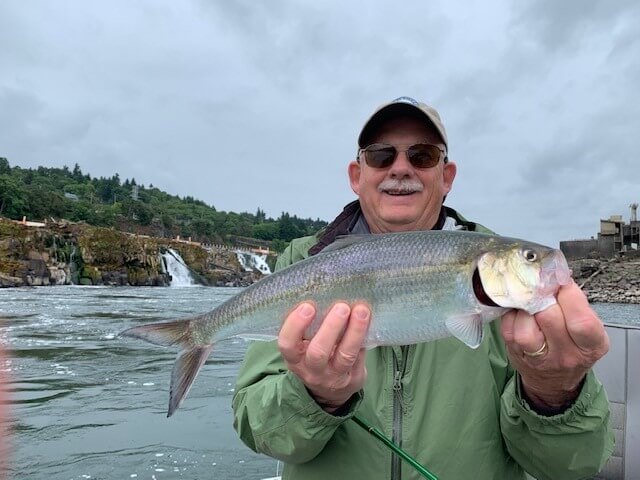 American Shad is a hard fighting, fun fish to catch. I had heard a lot about them in the past few months, having attended several presentations on fishing for Shad in the Columbia Basin. So, when Jim Hillas asked me along on a trip with Rob Crandall of Water Time Outfitters, I jumped at the chance.

The Columbia Basin hosts one of the largest Shad runs in the world. This anadromous fish moves up both the Columbia and the Willamette to free spawn every year in June. So far this year over 6.8 million have crossed Bonneville Dam and the run up the Willamette is estimated at 15% – 20% of that size. Shad average 1 – 5 pounds and fight like much larger fish. The take can be very gentle, just a slowing of the fly, or a hard pull just before a rocketing run.

Water Time Outfitters offers half-day trips on the Willamette They provide everything (except license and rain coats which we needed), or you can provide your own rod if you want. We used 5 and 6 weight rods with 300 grain sink tips and the ever famous Silver Bitchen fly.

The technique is similar to either the half-pounder twitch used on the Rogue, or the cast and retrieve with a twitch common on lakes for leeches. We fished the Willamette River near the 205 bridge (for some reason these fish do not go through the fish ladders). Action was immediate and during a half-day trip, I landed well over thirty fish and had a similar number of takes that I missed. Jim was having similar action on the other side of the boat, so there was no shortage of fun!

In addition to our action, we saw Osprey (also successful at fishing), Heron, Geese, Ducks, and some big fish rolling that could have been Sturgeon or Spring Chinook. Apparently it is not unusual to catch one of those incidental to the Shad fishing. Interestingly, there were only two other fishing boats. That might have been due to the weather, which varied from sun to rain. As my wife says, if Rick is fishing, it must be raining.

If you like catching hard fighting fish, and lots of them, try Shad. Not only is it fun, it can sharpen your skills for lake fishing.