My wife had booked a surprise trip in early June to the Wallowa Mountains in Eastern Oregon to celebrate our wedding anniversary.  We stayed at the Minam River Lodge, which was an adventure in itself.  The lodge is a former hunting camp located along the Minam River within the Eagle Cap Wilderness Area, about 25 miles upstream of the confluence with the Wallowa River and is accessible only via hiking, horseback, or flying to a grass airstrip.  Our plan had been to hike in from the Mossy Springs trailhead near Cove, Oregon (about 30 minutes outside of La Grande), but the trailhead is at 5,200 feet elevation, and the access road was impassible due to lingering snow and ice, so we chartered a flight on a Cessna from Enterprise instead.  The flight takes about 25 minutes and affords sweeping views of the ranches across the valley backed by snowcapped mountains.  Suffice it to say, it’s a dramatic introduction to the Wallowas.

I had been looking forward to fishing the Minam River for wild rainbows and crammed a 4-weight rod and reel plus waders, boots and several boxes of dry/dropper flies suggested by the folks at Joseph Fly Shop into my gear, but Mother Nature had other plans.  The incredibly wet and cool spring weather meant a lot of snowpack from the nearby peaks was still melting in early June, so the Minam was chocolate brown and raging above 4,000 cfs for our entire three day stay.  I made a game effort, hiking several miles downstream in search of slower water, but found no willing fish.  Despite that skunking, the trip did not disappoint.  The meadows and surrounding mountains were nearly as lush and green as the coast range in April, and the views were marvelous. The Minam River Lodge itself is a spectacular venue, with gourmet meals and a well curated bar and wine cellar in the middle of a federal wilderness area. Five-star dining in hiking attire is not an everyday thing but I highly recommend it.  Another benefit of the locale is a welcome respite from technology because the lodge has no cell service or internet service other than limited use for staff to manage reservations and food orders.  We took every opportunity to enjoy our time off the grid including a luxurious steam in the wood-fired sauna next to the river.  As soon as we got back to civilization and a working cell signal, we booked a return visit for 2023.  Hopefully the river conditions and the fishing will cooperate next time. 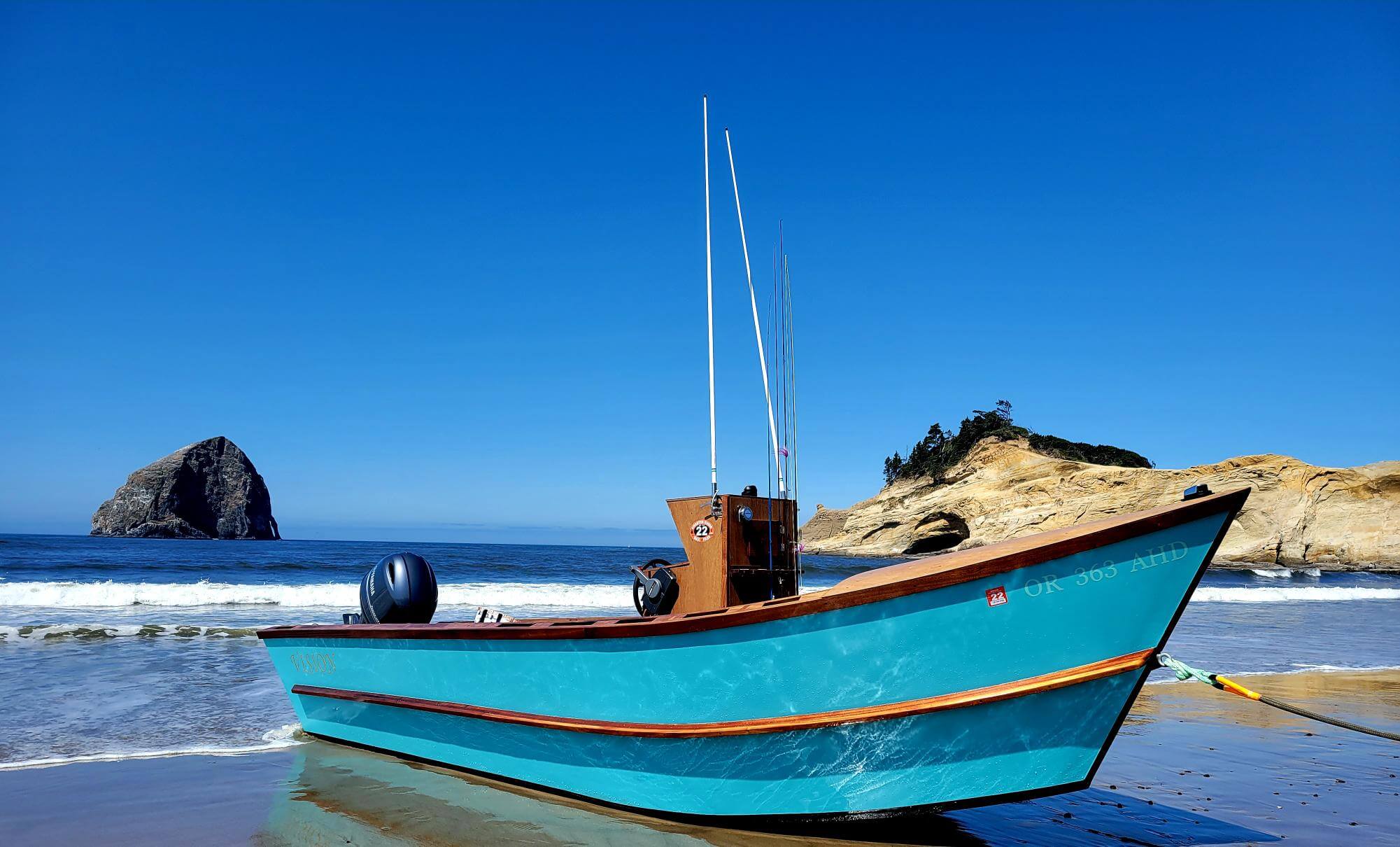 Flyfishing for Coho and Rockfish at Pacific City

Club President Mike Radakovich and I drove out to Pacific City in mid-July for an exceptionally fun day of dory fishing for Coho salmon and rock fish on fly rods. We took a trip with Rob Perkin of Connect Outfitters, who presented to the Club in March, and had a great day.  Dory boats are flat bottomed and launch directly from the beach. We put in shortly after 6:30 a.m. and motored about a mile past Haystack Rock off Cape Kiwanda and began targeting Coho salmon by trolling bucktail flies on 8-weight rods in the prop wash about 30 feet behind the boat. Mike and I each fished a sink tip which put the fly about 5 feet below the surface.  Rob also put a rod in the stern with a floating line so that we could see the pink bucktail bobbing on the surface between our sink tips.

July is high season for Coho, and Rob’s preference is to fish for salmon first, then go after rockfish.  This proved to be a successful tactic as Mike and I each managed to get two fin-clipped Coho within a few hours on a pleasantly calm ocean.  The fish were bright silver and fun to hook. Some takes were relatively subtle, while others were surprisingly aggressive.  Most of our salmon were roughly the size of Deschutes summer steelhead, ranging from about 4-7 pounds.  While some seemed eager to swim straight toward the boat, several of the larger ones put up good fights and all of them were a blast to play and land.  Rob supplies all tackle for these trips, so I was able to try a cool fiberglass 8-weight developed by Echo, called the Bad Ass Glass. It had a great action and was a brilliant neon blue color.

After getting our legal limit, we headed closer to shore in search of rockfish.  We kept the same rods and sinking lines but changed our flies to Clousers.  After Rob spotted some likely looking marks on his fish finder, we dropped our lines to about 40 feet and began jigging the fly.  Rockfish tend to school up, so if you find one you will likely find several more.  Mike and I doubled up several times and managed to get our respective limits (5 fish each) within about 30 minutes.

Coming back to shore was a fun experience of its own.  Rob warned us to hold on as he pointed the boat directly toward the beach and accelerated to match the speed of the incoming waves.  As the water shallowed, he tilted the motor up and slid the dory boat neatly onto the beach.  All in all a very fun adventure. 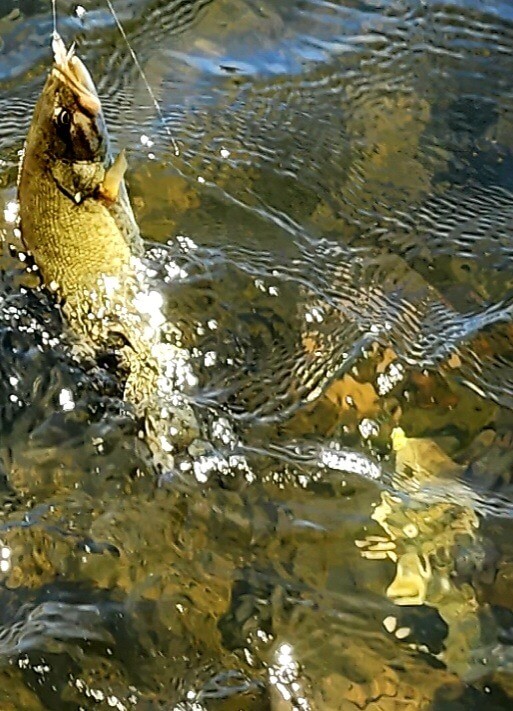 A smallmouth double on the JD

Smallies on the JD

Toward the end of July, I took a spur of the moment trip to the John Day River in search of smallmouth bass. I had expected to be out of town visiting friends in California, but travel plans were interrupted by my wife’s positive Covid test.  I was asymptomatic and tested negative, so I grabbed a rod and a handful of flies and tippet material and drove out to Starvation Lane, which is about six miles downstream from Cottonwood State Park. The weather was pleasantly warm and sunny without the oppressive heat that often shows up during July and the river levels had dropped significantly after the late spring runoff.

I carefully made my way down the primitive roadway, holding my breath around the hairpin turns, until I reached the parking area.  I rigged up a 4-weight rod with a floating line and a pair of chartreuse and white woolly buggers about 24” apart from each other and headed downstream for some wet wading.  It was my first time chasing smallies this year, so I had to remind myself to avoid the “trout” water and look for slower stretches.

My typical strategy for bass involves casting at a 45-degree angle downstream then stripping the flies on a tight line to trigger a strike.  John Day smallmouths are not huge, but they are scrappy fighters who punch above their weight class.  After about fifteen minutes I found my rhythm and began to catch fish as I waded downstream.  The first hour or so found almost all the fish hitting the white bugger.  That said, one particularly aggressive fish hit the chartreuse bugger immediately after I had removed the white bugger from its mouth. I dropped the fish into the water at my feet and instead of bolting off it turned and slashed at the other fly which was just below the surface.

Shortly after that display of suicidal tendencies, I found a deeper, slower run with some larger fish, most of whom preferred the chartreuse pattern.  I was playing a nice fish that was taking line off the reel when I felt an unusual tug and realized I had picked up a second fish on the trailing fly. This double was followed by six more as I worked through the run, which I am calling a personal best for two-fly fishing.  After four hours, I had landed about 50 fish and decided it was time to head home.

I hope everyone else is finding opportunities to get on the water and find a few fish.