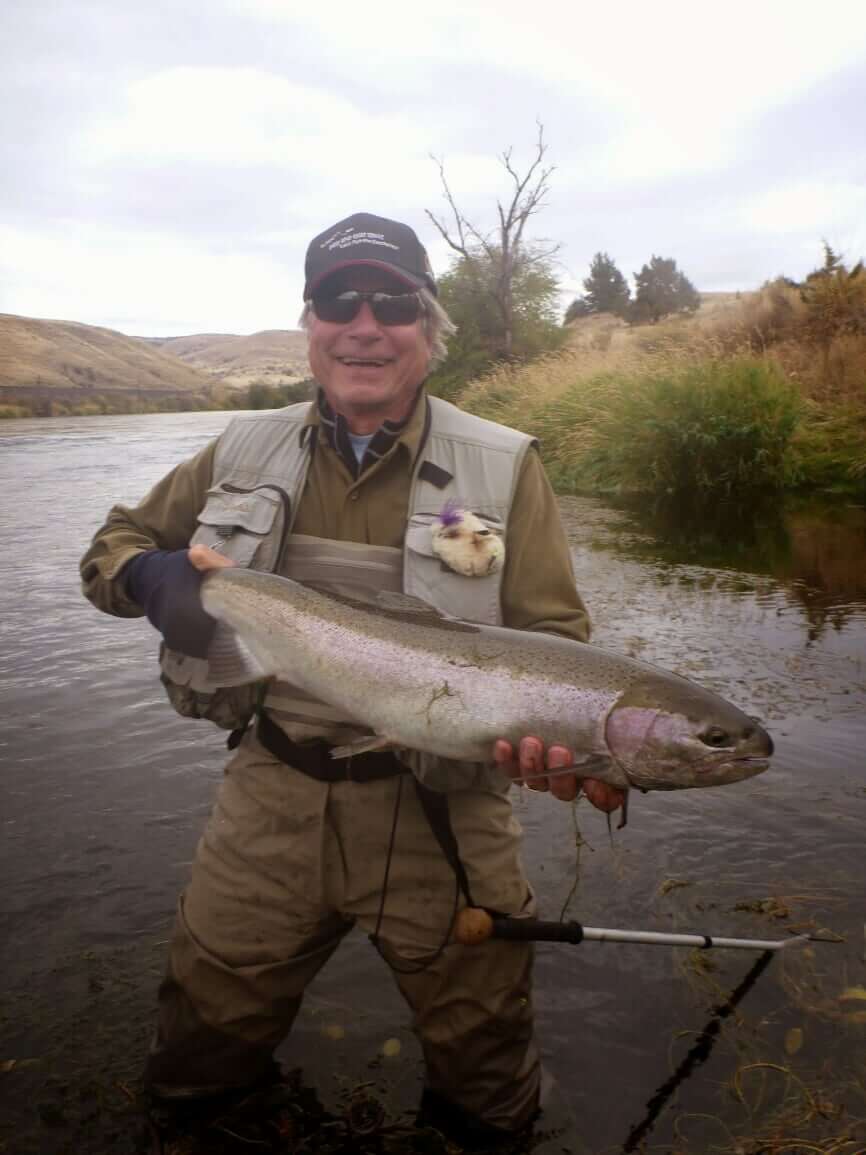 A Few Days to Remember on the Reservation

During these Covid Times a few fishing trips have been canceled so I thought I would reflect on success of the past.

Steelhead fishing on the Warm Springs Reservation is like fishing in the remote areas of BC. Lots of water to fish and little competition is the order of the day. I have fished quite a while with Al Bagley (Riverbend Guide Service) and now his grandson Matt Mendes (Spin the Handle) on their almost private waters on the Reservation. The two trips that come to mind mark the best Deschutes success in a week that I have had. Jay Spassov, a FFCO member now, and I fished with Matt in October of 2014. An early morning start from our cabin in Maupin got us to the meeting spot on the Reservation before light to wader up and transfer the gear to Matt’s Big rig truck to get us to the Holy Waters. The weather was a Steelheaders Dream on the Deschutes, overcast with slight drizzle off and on all day.

We hit the Cow drift first with Jay taking the top with a dryline and Bucks Bug and I stepped into the bottom half of the run with my go to morning fly, PGB (Polar Green Butt), swinging it with a dryline. The down eyed hook kept the fly a little submerged and heading for the bank from the faster water. I hooked a nice fish right off the bat and landed the 33” native which took a while to land with Matt’s help. Jay also landed one up above on the skater. Nothing like a double when fishing with friends.  I stepped back into the run to finish it out and hooked another nice 31” fish at the very bottom in the really slow water which gave up a little easier.

It seemed like we just alternated hooking fish all day long. Jay fished the Pitchers Mound which is a deep wade 1 foot from the bank with the next step being oblivion. He managed to land another nice 5 lb. hatchery fish on his skater by the time I showed up. I think it ended up in his smoker. I am usually dragging the bottom here with a sink tip but the skater was king today.

Fishing on the Reservation allows one to fish perfect runs from Trout Creek to Whitehorse either by boat or truck, each with their advantages with respect to accessible water. This was a day tackling the terrain in Matt’s truck with monster traction tires which are needed in quite a few spots. Also when your spey casts get a little sloppy, Matt, who is an excellent spey caster, jumps in to offer some guidance on getting things back in order.

We fished Moody in late morning which is one of the go to spots. It’s a huge riffle with a couple of inside seams that produce pretty consistently. I managed to fool two fish with the PGB landing one …another 32” fish. The number of big fish this year is quite amazing.

Then we headed down river climbing the rimrock with views in both directions forever. I never get tired of the canyon views under different light conditions. We fished Haystack and Wingdam next with Jay pulling another nice fish out of Wingdam with the dryline skater. We took a break to have lunch then off to Plywood hole. I remember the first time I fished this drift with Al Bagley and he said there is an “A” hole and a “B” hole, Rich you take the A hole. Al has a dry sense of humor. Another double with Jay landing his 30”fish and me losing mine on my BlueMax (an offshoot of Doug Stewart’s Max Canyon) in the B hole. 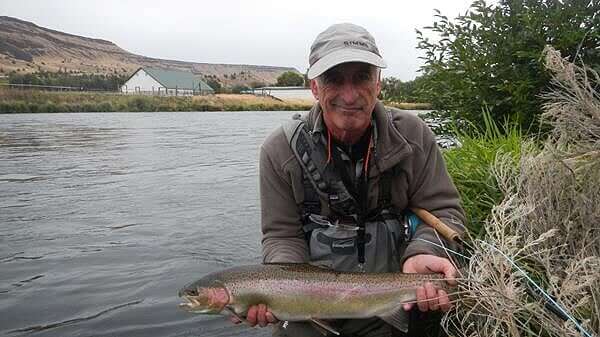 Next stop it was back upriver to the confluence of the Warms Springs River. We both fished the Deschutes just downstream from the Warm Springs with Jay taking the bottom half. Jay landed a fish around the corner from me staying true to his dryline and a Muddler this time. I fished through the whole run as Jay headed down to South Junction. No action for me when I caught up to Jay he had landed another fish.

We had just enough light left to fish Moody one more time. Jay took the tailout above Moody called High Banks to swing his bug. I stepped into Moody and hooked a fish in each seam on my Bluemax with a dryline, one at 28” and another one at 30”. The last fish jumped 8 times before giving up. It was a spectacular way to end the day!

When you fish with Matt you put in a long 12-13 hr day or daylight to dark. We ended up hooking 14 fish and landing 10 with quite a few 10 lbers. This was a record for both of us, each hooking 7 fish with several natives in the bunch. Jay had several other opportunities with the fish chasing those dry hair wing patterns. The good news was that I got to do it again two days later with John Pyrch our current FFF president.

John and I fished much of the same water starting at Moody where he had one on at High Banks for quite a while and ended up losing it due to reel problems. We then went to the Pitchers Mound with John fishing a dry line through first and I dragged a MOAL Leech through behind him. Matt coached me into dragging the 7’ MOW along the bottom which resulted in a 31” buck that eventually was landed in this really deep spot with Matt’s help. We headed for wing dam after this for lunch and late afternoon fishing with the shadows approaching. We kept the same lineup John going through first with the dryline and me dragging the MOAL on the bottom. A fish rolled between us and when I got to the spot an apparent snag turned into a heavy “fish on” which turned out to be a 33” hatchery. John jumped back in and hooked one too. After a pretty good battle it escaped John who wasn’t too happy about that!. Another two fish spot! We ended up at Moody at the end of the day for a second shot. We both fished the main run with John on the inside slot while I was fishing the outside seam with my PGB and dryline.  John headed for high banks determined to catch the one lost earlier after he fished through the inside and I kept fishing through the main run. After John left I hooked a fish that jumped a few times and then was gone. Pretty dark now so I pulled out and headed to the truck. In the meantime John hooked that fish up at High Banks and brought it to hand in the dark with pics by Matt. John has now claimed this as His Run which is OK with me. This was a more typical day fishing on the Reservation. For me it was a 10 fish week landing 7, fishing with two good friends and a great guide. Priceless! 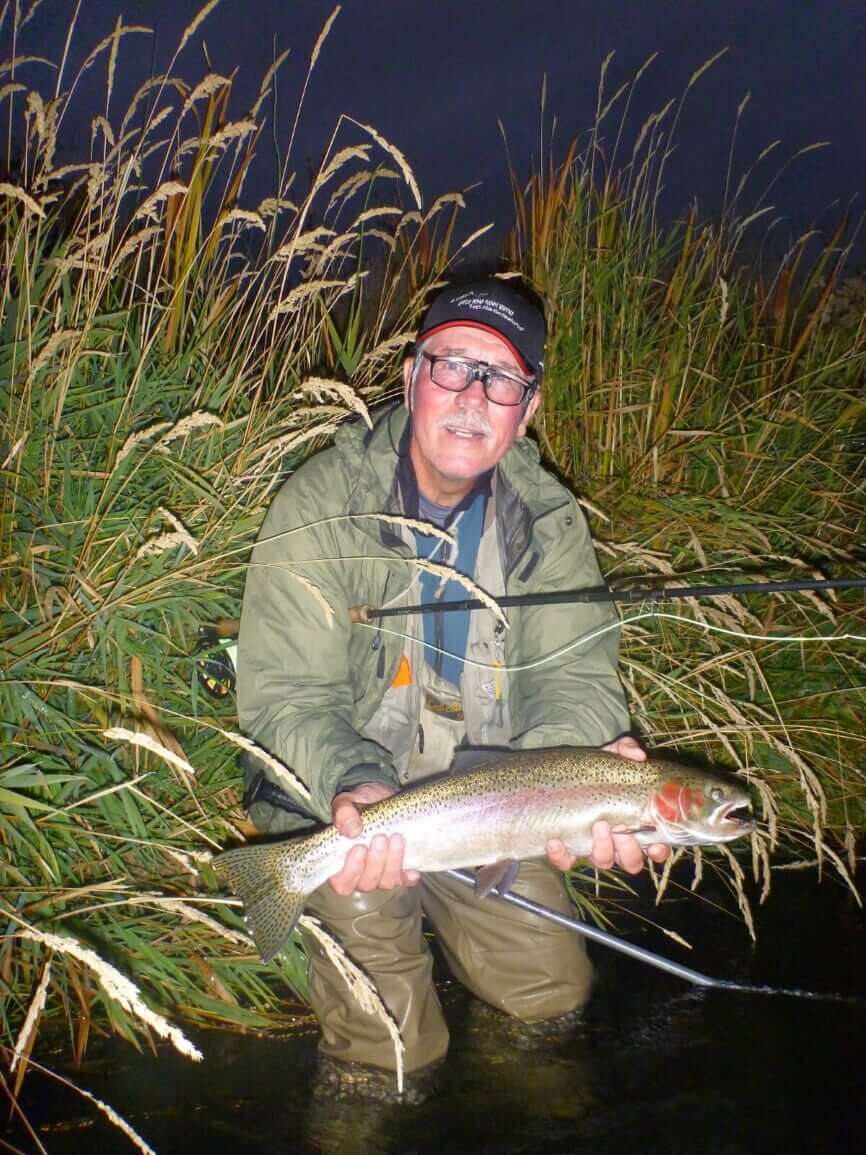 John Pyrch with last fish of the day.