Editor’s Note: This piece on the challenges facing steelhead that migrate to inland waters of the Snake and its tributaries comes by way of our White Salmon, WA member, Felton Jenkins. A die-hard steelhead worshiper, Felton laments the decline of these spirited fish and shares his thoughts on remedies. He takes us east where he joins Nez Perce members on the Free the Snake Flotilla, then ventures to the legendary Clearwater where he finds a fish that beat the odds. LKH

This 2019 steelhead season has been fairly underwhelming from what I have heard, from Southern Oregon to Terrace, BC.  There are many reasons that the population of our favorite fish, the noble steelhead along with its anadromous cousins, has been in a long decline.  To understand this bad trend, your brain needs to multi-task and learn about the 5 H’s:  Hydropower, Harvest, Habitat, Hatcheries & Heat.  It can be overwhelming for us, striving to be “conservation anglers” (acknowledgment to David Moskowitz & Pete Soverel who coined that term).  But each of us has to do what we can, including supporting valuable conservation non-profits like our FlyFisher Foundation, buying licenses, getting out on the rivers, going to meetings and hearings, sending letters & e-mails, etc.

One big issue I have been following for a long time is the ecological and economic disaster that is the four dams on the Lower Snake River.  Those dams don’t make sense, they weren’t completed until the mid 1970’s and they need to be breached. On the third weekend of September I drove over to Lewiston, Idaho to participate in the Nimiipuu River Rendezvous, formerly known as the “Free the Snake Flotilla.” You might be more familiar with name given them by French trappers – the Nez Perce.  The Nimiipuu people have been living and- fishing for salmon in this part of the NW for at least 11,500 years.  Given that long time period, it is therefore highly unlikely that Native Americans and sea lions are responsible for the 97% +/- decline of wild salmonids in Oregon and Washington during the last 180 or so years. 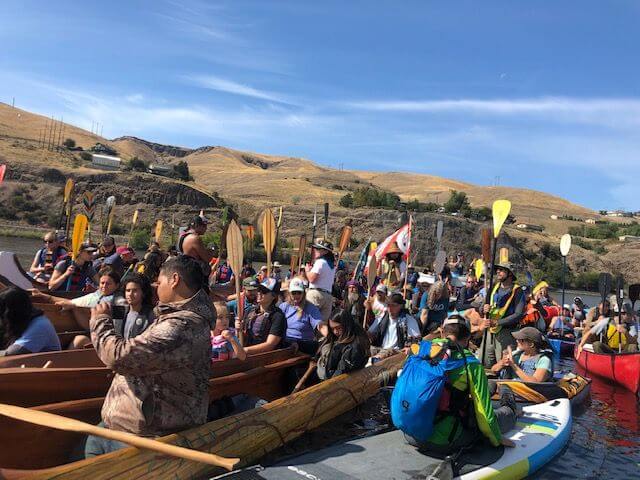 Participants from far & wide set up camp at the Hells Gate State Park on the Snake River, south of Lewiston.  There was a dinner followed by a traditional Nimiipuu welcome and prayer service.  On Saturday morning a couple hundred paddlers in canoes and kayaks hit the water to “Free the Snake.”  Some of the Nimiipuu paddled in large tribal canoes downriver from Asotin, Washington, and many other folks paddled upriver from camp to meet up for a ceremony on the river.

On Saturday after the float, I took off to see and hopefully fish the Clearwater River.  I had never been there before, but I had a local contact.  Josh Mills is on the board of the Wild Steelhead Coalition, and he has been spey casting on the river for many years.  He said it had been slow, but he, his father and a couple of buddies had a few hookups over the past couple of weekends.  The return was so low that Idaho Fish & Game was going to close the steelhead season altogether the next weekend on the 29th of September.  Josh said that had not happened before, but I should come up river and meet him around river mile 11.  Highway 12 follows the river heading east from Lewiston.  Well, I couldn’t find his little group of spey guys.  The turn-offs and river access were not obvious to me, so I was on my own.

I kept heading up river, on the look out for a place to park & fish.  After a few quick stop & looks on the way and several miles later, I finally found a big gravel bar with a “boat ramp” that I could park near, on river left.  There was a possible run upstream, near the end of a long and wide stretch of fast riffle water.  The fast water moved away from the bank and started to form a nice seam that I could swing a fly through, for about 80 yards or so.  Using a secret orange-ish fly with an intermediate tip, I started short and shallow, working some more line out before I started stepping downriver.  This seam was nice, but there were few fish in the entire Snake River watershed.   About halfway down the run, something of a miracle occurred, and I experienced the tug that some say is like a drug. 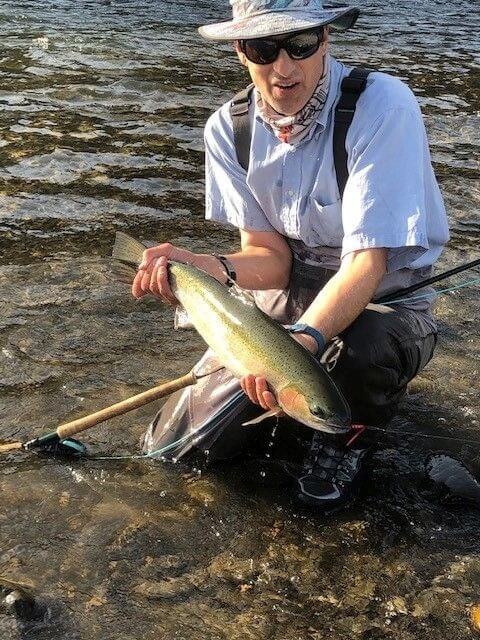 It was a lovely hen steelhead of hatchery origin.  No one was there when I arrived and started to fish, but while fighting the fish a father & son parked and came down to the water with their rods.  I said howdy and asked, “Can you use my phone and take a picture if/when I land this baby?”  They were gentlemen who were able to take a photo and share some local knowledge.  I’m sure my good fortune had to do with my participation in the Rendezvous and good mojo my tribal hosts gave me.  I missed other parts of the event that day, but I made it back in time for the last part of the evening – the movie “Dammed to Extinction.”  I recommend it; you’ll see why the lousy Snake River dams are no damn good.

Back at home in White Salmon the next week, I looked up the fish counts on www.FPC.org.  It probably took 2-3 days for the fish to get up into the Clearwater from Lower Granite Dam. So I looked for the 19th of September, and the number of steelhead that had crossed that dam for the year to date was 6,972.  About 51% of these were adipose fin clipped (hatchery fish) vs. unclipped (mostly wild but not all.)  I was pretty dang lucky to catch & carefully release one on that day.  There is no telling how many siblings and cousins of her birth year tried to make that round trip journey and failed.

So how many miles had this fish traveled?  My new secret run was about 23+/- miles up the Clearwater, from Lewiston where it joins the Snake.  I searched data “on-the-line.”  From a few different sources, I came up with 462 river miles to the mouth of the Clearwater from the Pacific.  So that puts this fish around 485 miles from the ocean & over eight dams (and she also did eight dams on the way down as a youngster.)  That is one tough & fortunate lady.  These noble fish are so strong and persistent, but they can not beat the 5H’s year after year.  Hence the 97% or so population decline in 180 years.