Editor’s Note: Periodically, the Literary Angler features a member’s thoughts on books or articles they believe will be of interest to fellow fly fishers. Foundation Board member, Dr. Mark Metzdorff reviews a book that takes us over to the darker side of fly tying. LKH

I must give credit to my wife Marie-Louise, who is not a fly fisher, for bringing this book to my attention, as I must also admit the events depicted in it escaped my notice even though they were widely publicized when they occurred back in the years 2009-13 or so, and involved an aspect of my favorite avocation such that I might have noticed, had I been paying more attention. 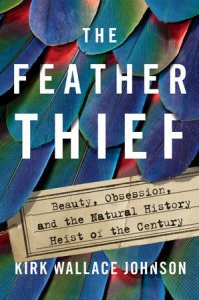 M-L and I like to listen to what we continue to quaintly call “Books On Tape” when we take long car trips, and she had downloaded a selection of books from the library to her iPhone, for a trip to Colorado we decided to take on short notice.  These included an Ivan Doig book neither of us had read yet; and the book which is the subject of this review.  As we drove and she read off the titles available, I was immediately reminded of a former best-seller The Orchid Thief, which she had read but I hadn’t, and wondered if it was somehow related to one of the books she had chosen.  It turns out they are related, though not by the same author.  The best-seller was about the arcane world of orchid collectors, and the illegal poachers of the same flowers in the Florida Everglades.  The Feather Thief, by Kirk Wallace Johnson, tells the story, and then some, of the theft of 299 rare bird specimens from the British Museum’s outpost, the Natural History Museum in Tring, Hertfordshire, about an hour by train or highway northwest of London.  The subtitle of The Orchid Thief is “A True Story of Beauty and Obsession,” and this phrase could just as well have been appended to Johnson’s work.  In fact, it more or less was; the subtitle of The Feather Thief is “Beauty, Obsession, and the Natural History Heist of the Century.”

The “heist” was perpetrated in June 2009 by a precocious 20 year-old American genius of classic Atlantic salmon fly tying, Edwin Rist.  Rist is also a world-class flute player, who studied at the Royal Academy of Music in London at the time of his crime.  He had been introduced to fly tying as a teenager and within an astonishingly short time became well-known for his skills in the small circle of accomplished salmon fly tyers worldwide.  The window that author Johnson opens on this world was a surprising revelation to me, considering that I thought I knew something about fly fishing and fly tying.  It turns out that if you are interested in actually fishing with flies, you probably don’t have much occasion to learn about classic salmon flies and fly tying, as these creations are rarely if ever fished, and are constructed by enthusiasts more for their esthetic value, difficulty of construction, and historic interest.  I knew this.  What I didn’t know was that at the highest, most authentic level, the art involves using feathers from birds that were rare in Victorian times when the genre reached its zenith.  Many of those birds, with exotic names like Indian Crow, Blue Chatterer, Resplendent Quetzal, and King Bird of Paradise, are now even rarer or extinct, making it difficult to tie these flies according to the hallowed recipes. Difficult, but not impossible, for many interesting and dismaying reasons which become apparent as one is lead through this terrific book by a master storyteller.

Author Kirk Johnson is also a pretty accomplished man for one so young.  After finishing his B. A.  in Near Eastern Languages and Civilizations at the University of Chicago in 2002, and continuing as a Fulbright Scholar studying political Islamism in Egypt, he eventually worked for the U. S. Agency For International Development in Fallujah, Iraq.  As U. S. involvement in the war there wound down, he became aware that the U. S. was abandoning Iraqis who had served our interests as translators, drivers and the like, to substantial risk of death at the hands of other Iraqis who saw them as collaborators.  He went on to found the non-profit List Project dedicated to getting these individuals and their families out of Iraq to safety in America.  Over 8 years his NGO resettled more than 2,000 Iraqis.  Despite this apparent success, Johnson felt his work was a failure as he perceived the need was far greater than what he was able to accomplish, and he was burned out by his efforts.  During a break in his work, he took up angling with the fly as a stress reliever.  While fishing with a guide friend on the Rio Grande in New Mexico he learned of the Tring Museum theft and became hooked by a different sort of angle.  The case became an obsession for him, leading him on a world-wide chase for information and justice.

Though a true story, The Feather Thief reads like a page-turner of a mystery, as Johnson becomes an amateur sleuth in pursuit of what really happened.  There are innumerable characters that one literally could not make up, including an Oregon connection.  His narrative is interspersed with fascinating accounts of history he learned along the way, including the research of British naturalists Charles Darwin and Alfred Russel Wallace, both of whom contributed bird specimens to the Tring and independently described the origin of species theory of natural selection; and the insular world network of elite salmon fly tyers, bound together by fly tying shows and the Internet, many of whom covet and trade in these rare feathers while determinedly ignoring the feathers’ origins.  The director of the Tring Museum’s ornithology department gives an impassioned tutorial and defense of the value to science of these bird specimens with their associated “biodata” tags which detail time and place of harvest, thereby allowing studies unforeseen to the bygone collectors, such as changing heavy metal concentrations in the feathers over time that could only be studied with modern technology.

In this light, the book is a damning indictment of an aspect of our sport which I formerly perceived as high art requiring extraordinary skill.  Like the orchid poachers, these salmon fly tyers came to their craft because of an appreciation of things beautiful and rare; but a significant number descended into an obsession to possess something they should not have; and in the process, directly or indirectly did inestimable damage to the incomparable Tring collection.  Trade in Tring skins and feathers undoubtedly continues to this day, despite all the knowledge about the crime that is readily available.  Rationalization is a powerful enabler; one tyer even justified his actions with the belief  (paraphrased here) that “God has a plan for us, and there is nothing we can or should do about it.  One day the Rapture will come and nothing will matter.”  Others had more “reasonable” rationalizations after the fact, but ones that on true reflection are equally damaging to the resource and the soul.  Johnson dissects these apologia with an ethical and  philosophical scalpel, one that also sheds light on attitudes prevalent in current American politics.

When on our Colorado trip I tentatively asked Marie-Louise if she would mind listening to the “fishing book,” she admonished me that she had not selected the book for its interest to a fisherman, but because it had been glowingly reviewed as a well-written, fascinating, “can’t put it down” sort of book.  Reflecting that she probably didn’t mean it quite like it sounded, I nevertheless chose The Feather Thief , and we settled into a book which truly grabbed us, and which made every necessary stop of the car an exercise in impatience to get back to the story.  I can heartily recommend this book to all fishers, and they can confidently share it with their non-fishing brethren knowing that they will find it a most interesting and entertaining read.