This piece comes by way of FCO Board Member, Christian Werner. He and Steve Willhite recently fished for Coho in southeast Alaska. Instead of sending a story of the great bright Coho they enticed to the fly, Christian informs us of very worrisome declines in legendary salmon runs in our northernmost state. Follow the latest reports and get involved by checking out the Wild Salmon Center and Trout Unlimited pages focusing on Alaska issues. LKH

I have fished in Alaska for over 20 years and many times each year; mostly fly fishing for sport and some ocean fishing for food. This year Steve Willhite and I went up for the fall Coho (or silver salmon) run which, in Southeast Alaska, is September into mid-October in hundreds of rivers and streams on the mainland and islands.  We fished Chichagof Island, also known as Bear Island out of the town of Hoonah.

It was very interesting to be there to see firsthand what happened to the salmon fishing….and very concerning.

Remember, there are no dams or agriculture chemical runoffs or other river/stream degradation that impact the spawn and seaward migration of the smolts. Declines in salmon runs are the result of climate change leading to water temperature changes, rainfall deficiency, over fishing, and/or major or minor ocean current changes.

In all of Southeast Alaska, the 2018 decline salmon returns was disastrous for the local Native American subsistence fishermen, commercial fishermen and the sport fishermen from all over the world. There were exceptions in a few rivers where all four salmon returned as required for escapement numbers to reach a sustainable level. In most rivers the first returns are the kings, then the sockeye and then the pinks and chum and, lastly, the wonderful Coho.

King salmon size and numbers have been declining for years and this year the escapement was so low most king salmon fishing or retention when caught while targeting other fish was banned. In many streams and rivers, there were fewer pinks or chums so commercial fishing was curtailed and sockeye numbers were so low there was little sockeye fresh water fishing.  In the Situk River north of Chichagof the sockeye return was 24,478 this year at the weir and 91,146 last year while the required escapement number is about 44,000. No fishing.

The local freezer plant for commercial fish in Hoonah expects to process less than 1,000,000 pounds this year while handling 2,400,000 pounds last year. It may close permanently at year’s end. 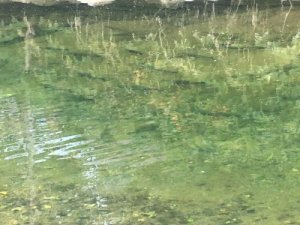 Now for the silvers. There was an early return of the biggest silvers anyone can remember; many in the 15 to +20 pound range which means they stayed out another year before returning to spawn. In past years the average weight was 6 to 7 pounds. River water levels were very low so the silvers had trouble entering their spawning beds to make redds. The season is still open so no final numbers are available yet.

So what happened? No easy answer, or solution to this real problem, but climate change has raised ambient temperature, reduced rain and snow pack and increased glacial melt in all of Alaska. Low river levels impact salmon entrance and spawning success. Commercial overfishing? Ocean current changes? We will wait for the reports and see what is done about any of this.

Halibut and river steelhead and trout fishing remain good, at least for now.