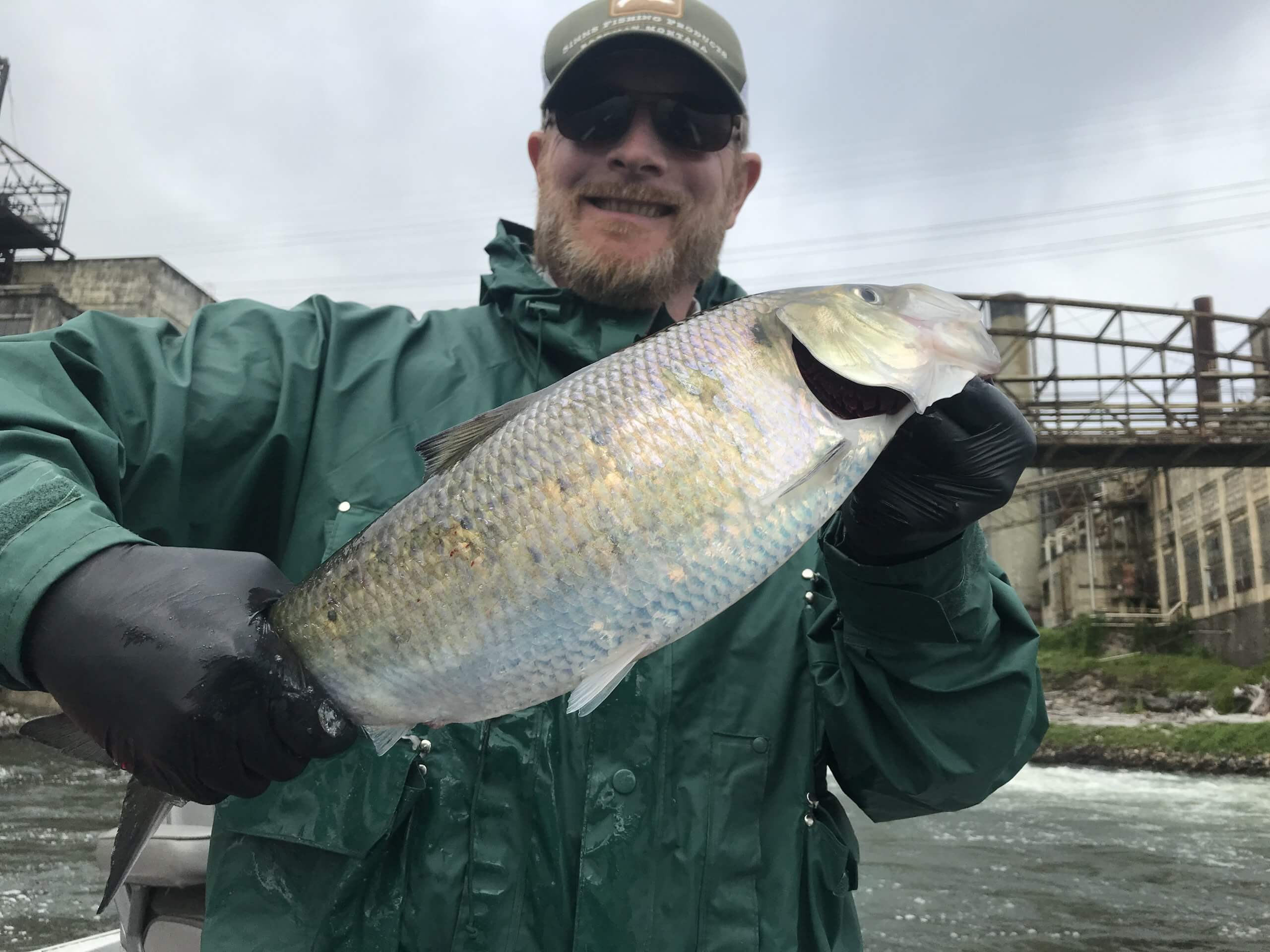 Welcome to summer 2020!  I hope you are all managing to enjoy some outdoor recreation as we continue to deal with Covid-19 and civil unrest.

Due to ongoing health concerns, we will not be holding our July dinner meeting at the University Club.  We are looking into whether we can hold a modified version of our annual picnic at the Westmoreland Casting Pond on August 11.  See this month’s Member Matters page for more information on future meetings.

June turned out to be a good fishing month for me.  A trip to Grindstone Lakes early in the month was followed by some local action with a half day shad trip with new club member David Zarosinski.  We fished at Willamette Falls with Rob Crandall of Water Time Outfitters and had a blast fishing from an anchored jet boat.   Shad are the largest member of the herring family and are sometimes referred to as the poor man’s tarpon.  They have a forked tail which gives them plenty of turbocharged speed and are great fun on a 5 or 6 weight fly rod.  Shad are an anadromous fish introduced to the west coast in 1871 and they are prolific.  In 2019, 7.4 million of them went through the Bonneville Dam fish ladder and this year is on pace for another great run with over 5.8 million counted as of June 30.  David and I spent four hours in the rain and landed over 60 shad.

Willamette Falls is the sixth largest waterfall in the country by volume and the setting is an odd juxtaposition of decaying industrial buildings and natural beauty.  Great blue herons, eagles, and osprey often are visible, and the shad run attracts large sturgeon who can be seen rolling on the surface.  Occasionally, you hook one as well (usually because it has eaten a shad you are playing).  David had a wild time when a big sturgeon ripped out all his line.  Fortunately Rob was able to up anchor and chase the fish to allow David to reel in the backing and recover the fly line before breaking off.

Just after the summer solstice, I headed out with Rick Pay and five other non-club anglers for the wilds of Eastern Oregon on a three day float trip chasing trout during the stonefly hatch on the Grande Ronde.  We’ve done this trip a few times now with Craig Hughson and the guides at Northwest River Outfitters and each one has been different.  Previous adventures featured thunderstorms that brought up the river level and put down the fish.  This year we were blessed with fine weather but the river was already about 1500 cfs too high for good fishing and the flow chart followed a sine wave curve as the warm sunny days released meltwater from unseasonably late snowpack in the Wallowa Mountains.  The constantly changing flows and excess water were far from ideal but we still managed to catch some fish. 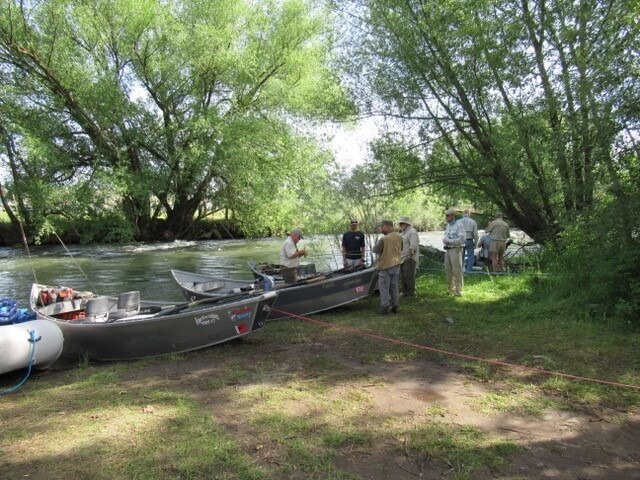 Getting ready to launch on the Wallowa RiverWe put in on the Wallowa River about 15 miles upstream of the junction with Grande Ronde and held on tight as our drift boats flew downstream.  This is all dry fly fishing and most of us were rigged with tandem flies, often a chubby Chernobyl or a chubby Norm Woods followed by a smaller rubber legs stimulator or  standard Norm Woods. 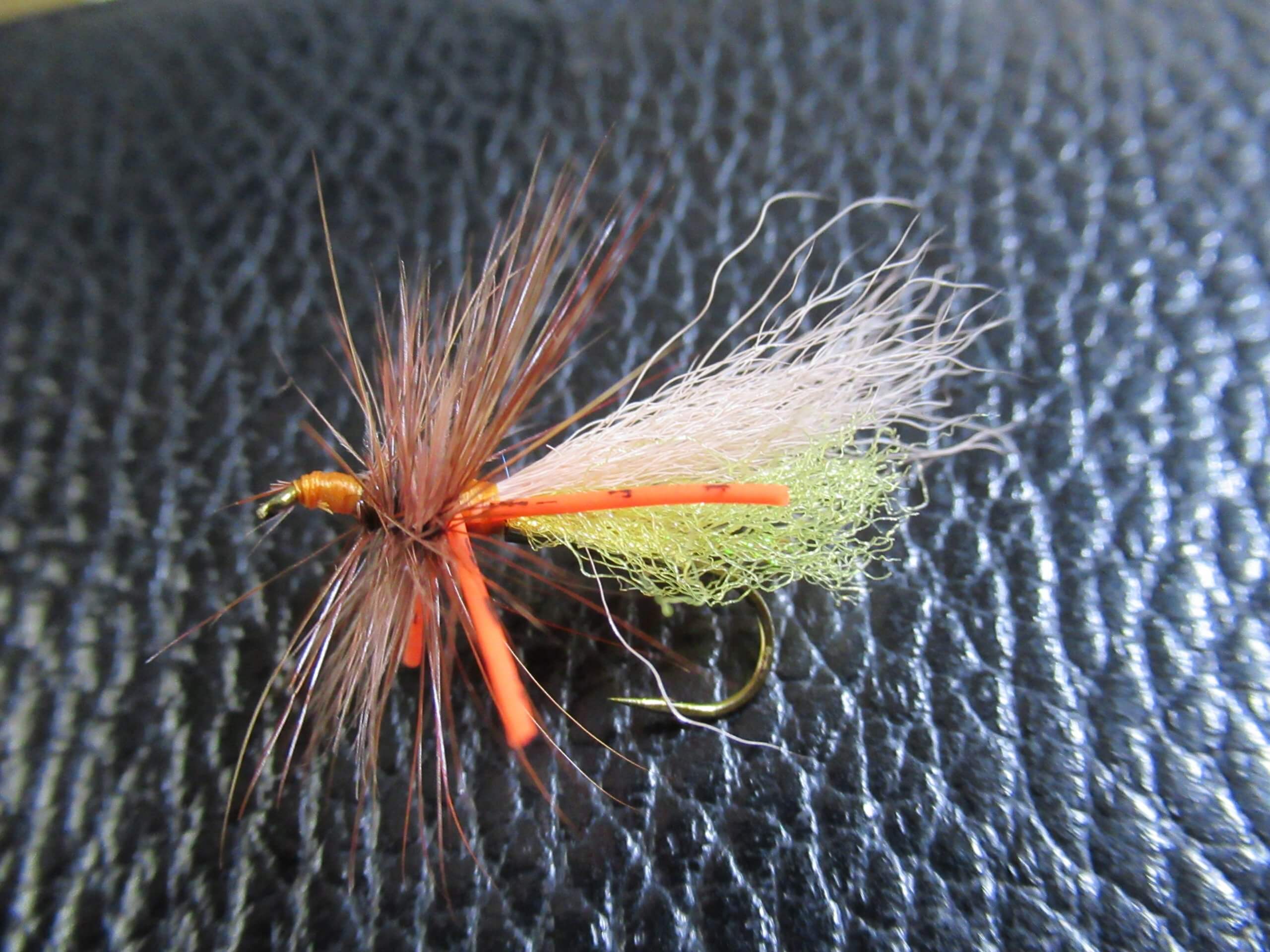 Rick Pay won bragging rights for best fly name with his Clark’s stonefly pattern that he tied with rubber legs and a few other features.  After that fly landed numerous wild rainbows on the second day, our guide aptly christened it the “Paycheck” which is a pretty cool name for a fly.  Especially if your name is Rick Pay.

Most of our fish were 11” to 16” and fun to catch, but this year we confirmed past rumors of much larger fish.  The guides had fished the river themselves the week before due to a trip cancellation and had pictures of some incredibly fat rainbows estimated at 5-6 lbs.  Many of us on this trip also hooked some heavy fish, including a heart pounding moment when a big fish took me into my backing almost immediately then wrapped around an underwater log.  With the drift boat heading downstream at full speed and my reel screaming toward the end of the backing, I managed to palm it to a stop and break off with a new respect for the Ronde rainbows.

On the drive back from Enterprise, I was planning to stop off for an afternoon of small mouth bass fishing on the John Day river, but my elderly Chevy Avalanche broke down on I-84 a few miles east of LePage Park in the Gorge.  Fortunately I had cell service and AAA was able to tow my rig to Portland, but the tow companies are no longer allowing passengers to ride along in the cab due to Covid-19 restrictions. That required a very large withdrawal from the marital favor bank in the form of asking my wife to make a 4 hour round trip to pick me up.  Suffice it to say I did not go fishing that afternoon. Sigh.

My final fishing trip of June was another half day shad trip with Rick Pay.  We had a great time catching lots of fish, again with Rob Crandall of Water Time Outfitters.  I know that shad are not everyone’s cup of tea, but I think there are few things more fun than four hours of casual fishing close to home in June with near certainty of many hard fighting fish on the line.

As we continue to navigate these uncertain times, I hope everyone is remaining safe and healthy.  I look forward to when we can resume our normal meetings. Until then, wear your masks, keep your distance, and enjoy the Oregon summer, preferably with a fly rod in hand.