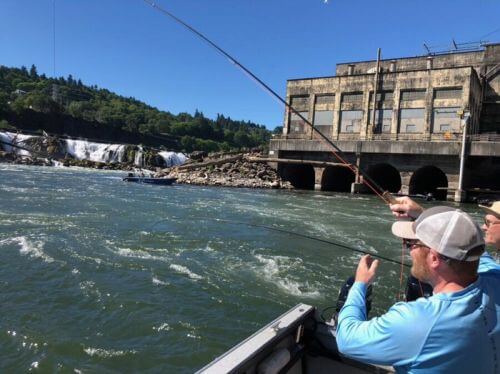 Summer in Oregon means fly fishing and I’m happy to report that I have had a more than a few good days on the water.

June fly fishing started with a shad trip to Willamette Falls with my cousin Kenneth who was visiting from Maine. We had a lot of fun bringing about 35 fish to the boat. Rob’s go-to guide at Water Time Outfitters is Todd Rettman, who provided all gear (10’ mid-weight rods with heavy sink tips) and flies and did a great job of showing us the right tactics – basically casting into likely seams and rhythmically stripping or twitching the fly to entice a bite. Shad are fast swimmers with a big forked tail and make great sport on a 5-weight.

For my next trip, I met five other members at the free club outing in Washington state at Goose Lake in the Gifford Pinchot National Forest near Mt. Adams. This is a popular camping and fishing site (I counted at least 30 small boats and personal watercraft including ourselves), but Goose Lake’s 58 acres can accommodate plenty of users. The lake is stocked with rainbow, cutthroat, and brown trout, and also has resident brook trout. Fishing (and catching) was excellent, with all members reporting large numbers of fish. Stripping buggers and micro-leeches worked well. Ross Beatty put up a free beer for anyone with a Grand Slam of all four trout species, but I think the only beer purchased by Ross was for himself. Members Teri Beatty and Rick Pay deserve honorable mention for getting three out of four. 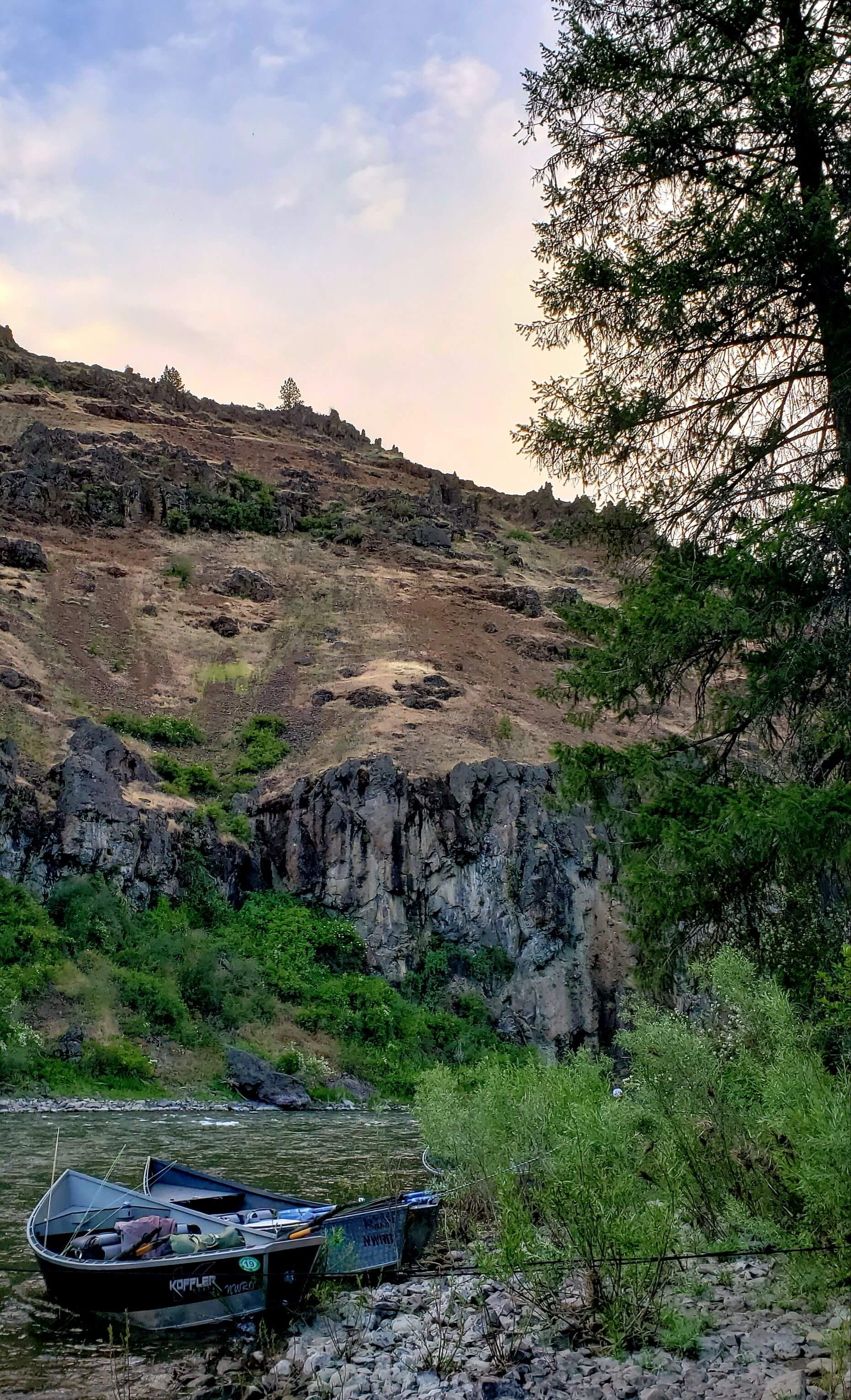 A few days later, I headed out for a three-day trout trip on the Grande Ronde River in northeastern Oregon. Rick Pay, fellow member Steve Schulmerich, and I were part of a six-angler expedition run by Craig Hughson of NW River Outfitters. The Ronde was ripping at just over 5,000 cfs when we launched the drift boats from the Minam Store. That’s fast water and our guides spent a lot of time back rowing to give us a fleeting shot at lies close to the bank. This is a salmon fly trip, with double dry fly rigs, often a small rubber legs Stimulator tied to a the hook of a beefy Chubby Norm. The scenery, camp accommodations, food, and fellowship around the campfires was a blast but the weather gods were not kind. After a 70 degree first day, we saw mostly clouds and rain showers with highs in the 60s, which reduced bug activity. On the bright side, the river dropped about 1300 cfs in two days, so by the final morning float we had some delightful fishing water, and everyone managed to get into quality fish including a nice 19-20 inch wild rainbow caught by Rick Pay.

During the last week of June I took a second shad trip to Willamette Falls, this time with Rob Crandall as guide and Rick Pay as my partner. I have three items to report:
1. Shad definitely bite in the rain – we managed well over 50 fish to the net plus numerous LDRs and missed strikes and it was coming down pretty hard most of the morning.
2. Rick Pay continues to a) bring rain to my fishing trips; and b) outfish me.
3. I’m making shad fishing on the fly an annual event.

My last trip of the month was a day trip to prospect for smallmouth bass on the John Day River at Starvation Lane. I took a friend of mine who is a lifelong gear fisherman but has passing familiarity with fly rods. The flow was around 1,100 feet, so the fish were still well disbursed and that water is not as wadable as I prefer, but I’ll be back to the John Day after it drops.

My friend had brought his father’s cane rod from the 1950’s but he didn’t have a line, so we experimented with some of my reels and decided the rod worked best as a 5-weight. It was my first opportunity to cast bamboo, and it was awesome. It took a few minutes to adjust my stroke to the slower action and fuller flex but the feel of the cast was like nothing else I have experienced. Note to self: invite this friend to fish more often.

I hope you all are getting a chance to enjoy the fishing and scenery in Oregon or elsewhere. I’m looking forward to catching up with everyone at the July Movie Night dinner meeting.