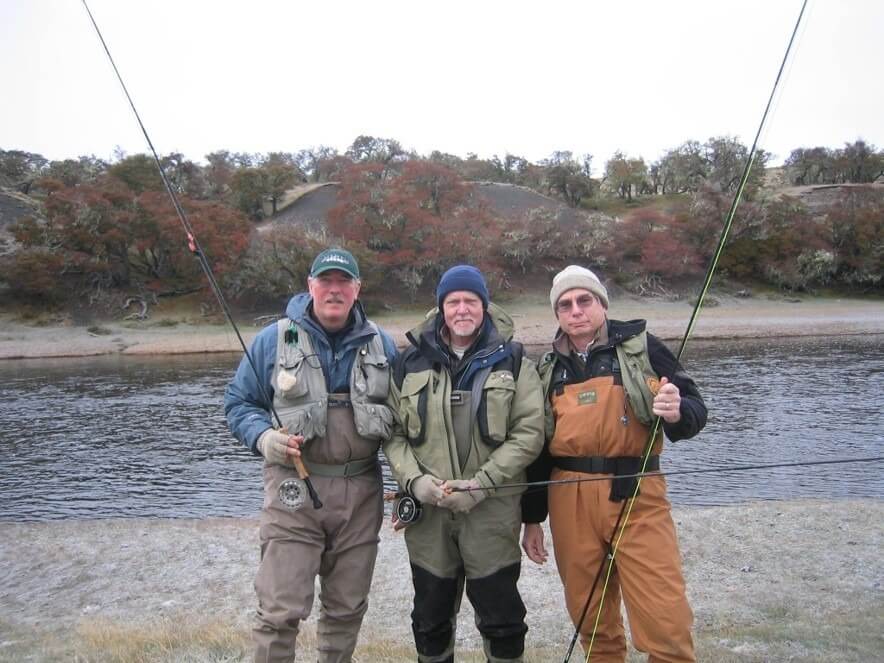 Doug has been associated with the club since 1976 when he was accepted to the waiting list and was the featured Fly Tyer before the monthly meeting in August…. That’s 45 years ago! He tied his classic Max Canyon Steelhead Fly which worked well everywhere but especially on the Deschutes. He was quizzed why he chose a down-eye nymph hook in size 6 or 4 and his response was that the heavy wire resulted in more landings.

Doug started out as a school teacher after graduating from the University of Portland where he was a stalwart on the basketball team. The teaching didn’t last long because he had a desire to open a fly shop and that he did – Stewart Custom Tackle out on NE Halsey. He had a following of club members that had custom rods made, attended his fly fishing and tying classes, and used his guide services for trips down the Deschutes in the summer and other rivers in the winter . . . a mentor to many. 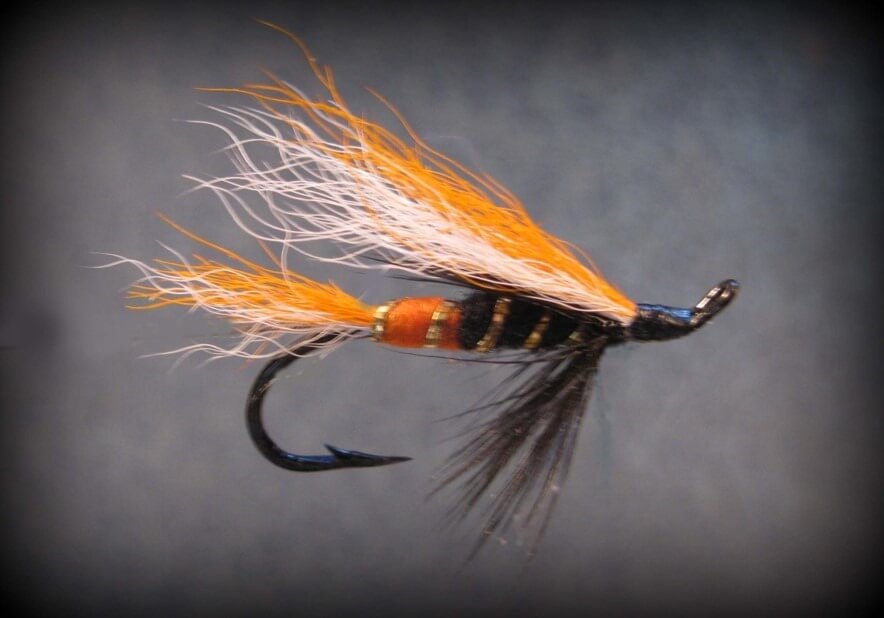 I was one of his students at a Clackamas Community College course he offered entitled “Summer Steelhead Fishing.” Teaching was one of his great attributes and he taught us well; one night in class and then the next day on the Deschutes. I was introduced to the Max Canyon and where to fish it and rewarded with my first steelhead landed on a fly. I adopted the down-eye hook for the Max Canyon or one of the offshoots including my own for steelhead flies and use them to this day some 40 years later and can attest to the high landing rate.

Since that first class, we have fished from Kodiak to Tierra del Fuego and became partners in the La Casa Deschutes, a cabin on the D in Maupin. Originally, I was the winning bidder for a few days at the cabin he donated for our auction and he graciously showed my group many spots to fish around Maupin. He did keep a few close to the vest that he still can catch a fish on command when he’s at the cabin.

Doug has retired as shop owner and guide but not from giving back to the sport. He has written two books sharing his fly fishing knowledge and currently provides occasional articles for the Fly Fishing and Tying Journal.  His down to earth approach is reflected in his writings. He’s discovered a new love of golf and can still smack the ball.  Maybe he will write a book about re-discovering golf after 70.

Don’t just take my word for it: Jim Teeny, Honorary Member and Steve Dorn, FCO member, from Doug’s inner circle, have a few words to say too: 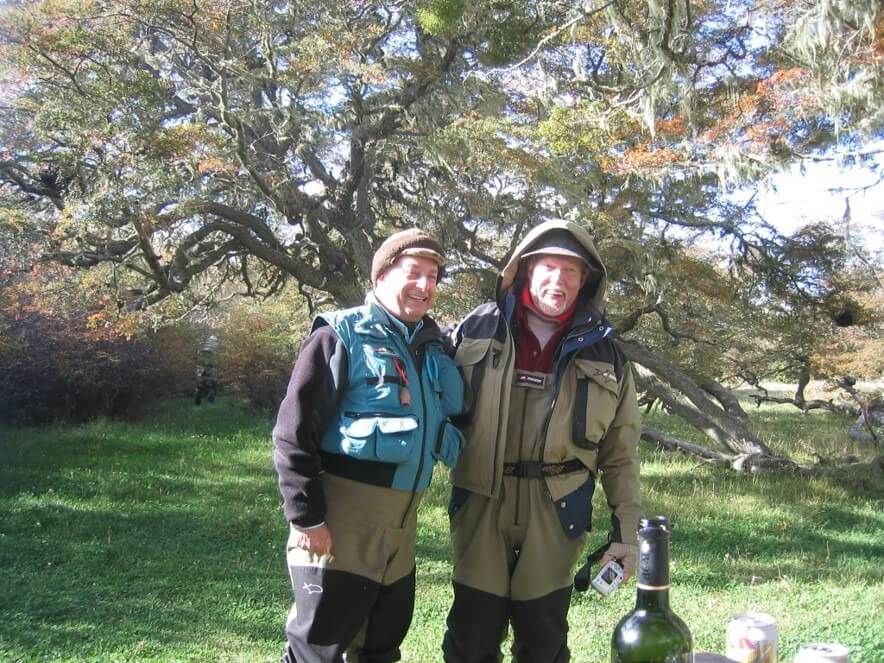 “It was early in the 70’s that my father Fred Teeny and I were fishing the Wagon Blast area of the Deschutes and were taking a lunch break. Not knowing who he was, Doug and his father were working their way down the river and asked if they could fish our spot. Of course Doug hooked and landed a steelhead and then they moved on. I have kidded Doug for years about, “Who was that masked man?”  When I really got to meet Doug was a few years later though Steve Dorn at Mack’s Canyon. Since that time we have had a strong and lasting friendship. We got to fish Chile on the mighty Rio Grande for the beautiful sea run brown a couple of times. I believe it was back in 1978 that we slayed the winter run steelhead, i.e. hooked and released 97 in a two month period. We were like kids in a candy store. Doug has always been fun to be around and put on the best clinics in his fly shop every time.”

“ Wonderful memories.. I got Jim Teeny to work the grand opening of his fly shop and we’ve all remained friend all these years. I first met Doug about 1972 or 73. He was teaching a class at Clackamas Community College. We went fishing together and became fast friends and enjoyed fly fishing, fly tying, camping and all the things friendship encompasses. Hundreds of days on the Deschutes, Kalama, Sandy, and Washougal to name a few and many lakes. Doug was my mentor on fly fishing, fly tying, reading water, etc. He has been a lifelong friend and companion and really good person. I remember he and I ordered boxes of fly fishing and fly tying gear from Herters. When the boxes arrived it was like Christmas morning, what fun. Doug is so deserving of the FCO Honorary Membership!”

Thanks to Rick Pay, John Pyrch, and Jim Hillas for moving this nomination forward with the club.

“Rich introduced me to Doug some 20 years ago and I have benefited from his fly fishing knowledge and wonderful sense of humor ever since.  We had a great time fishing for big sea-run brown trout on a trip of a lifetime to Terra del Fuego organized by Doug.  The stories and anecdotes related by Doug and Jim Teeny were a highlight of that trip.  More recently, Doug gave me a personal steelhead fly fishing lesson on the Deschutes while staying at the La Casa Deschutes.  Later that week I joined Jim Snow, Al Irwin and other FCO members at Chateau Rimrock for steelhead fishing.  I followed Doug’s instructions and landed three beautiful fish all on Doug’s famous Max Canyon fly.  The biggest was a nice 15 pounder.  Doug’s long affiliation with the FCO, his willingness to share his vast fly fishing knowledge, his literary and artistic skills all contribute to a legacy that deserves an Honorary Membership in the FCO.”

In the words of one of our past FCO presidents, Ron Powell, in the 30th Anniversary Creel “Our elder members are perhaps the greatest resource for the Organization. They are the standard which we gauge how we live with our passion: they are reassurance that our passion can live and serve us a lifetime”

Congratulations and Thanks Doug! 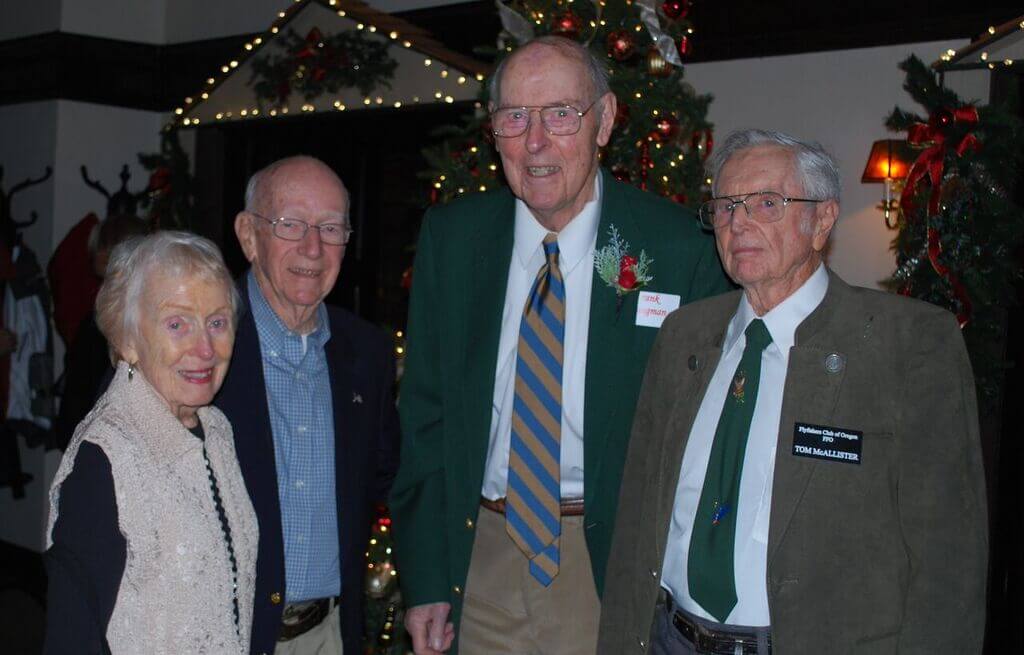 The Club has lost another charter member with the passing of Frank N. Youngman, Jr. last month at the age of 97. Frank was an active member and regular attendee at FCO meetings for over 5 decades. He served as FCO President in 1996. Frank was also a combat veteran, having served on a Navy destroyer during WWII. His obituary is posted online. Thank you to Janet Arenz for letting us know of Frank’s passing. His family has our deep condolences. 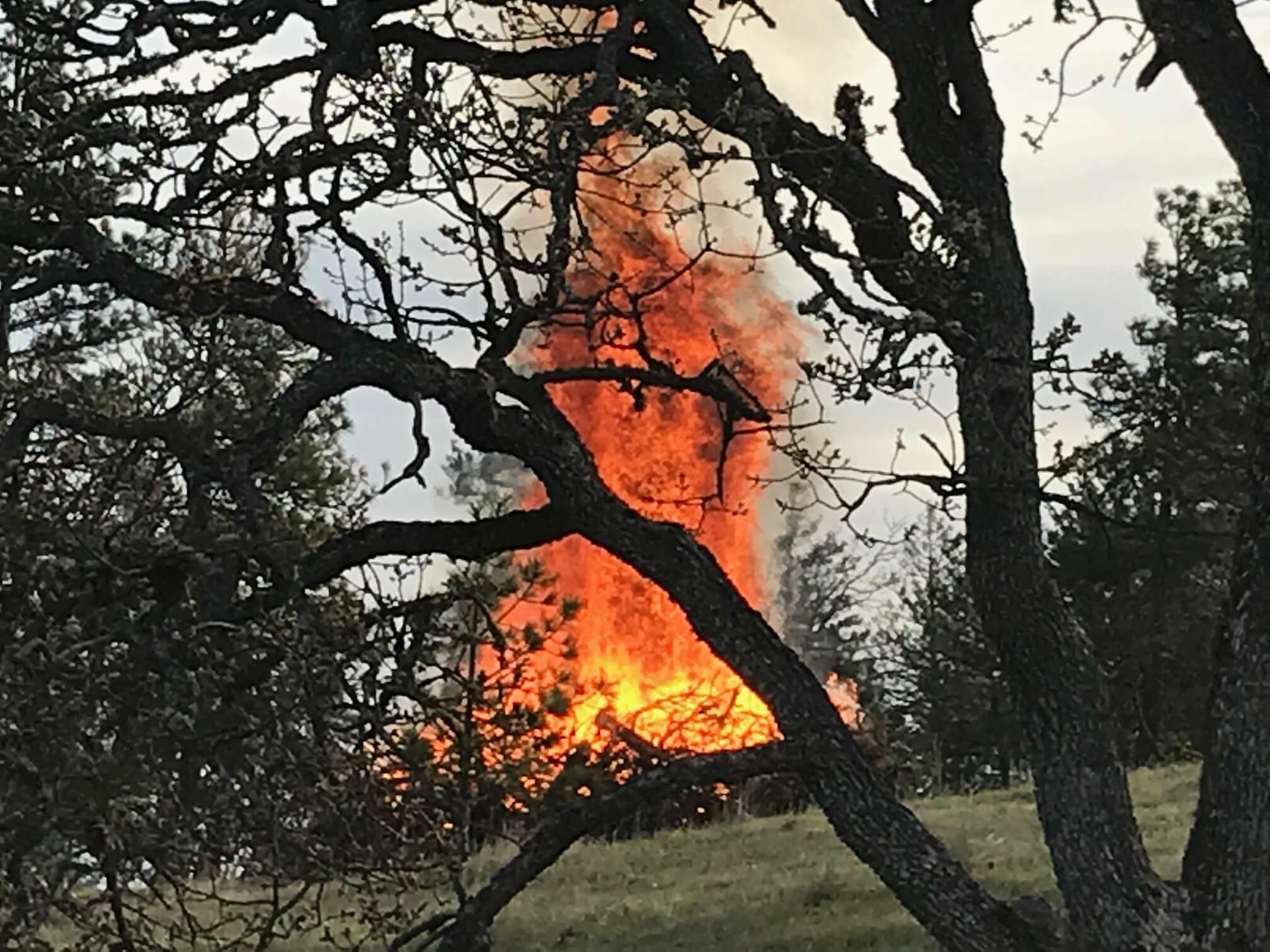 Too Hot to Handle!

Essential fishing equipment in the age of climate change – a stream thermometer. Thermal stress is real and when angling for cold water fish (trout, steelhead, salmon), you should refrain from fishing when water temperatures of reach 68 F. ODFW has issued new closures and “hoot owl” restrictions on angling between 2:00 p.m. and one hour before sunrise on waters including the lower Deschutes from the mouth to Sherars Falls. The unseasonably warm weather and dry spring will certainly reduce water quality in many of our favorite rivers. Perhaps it is a good year to focus on warm water species. Bass, anyone? 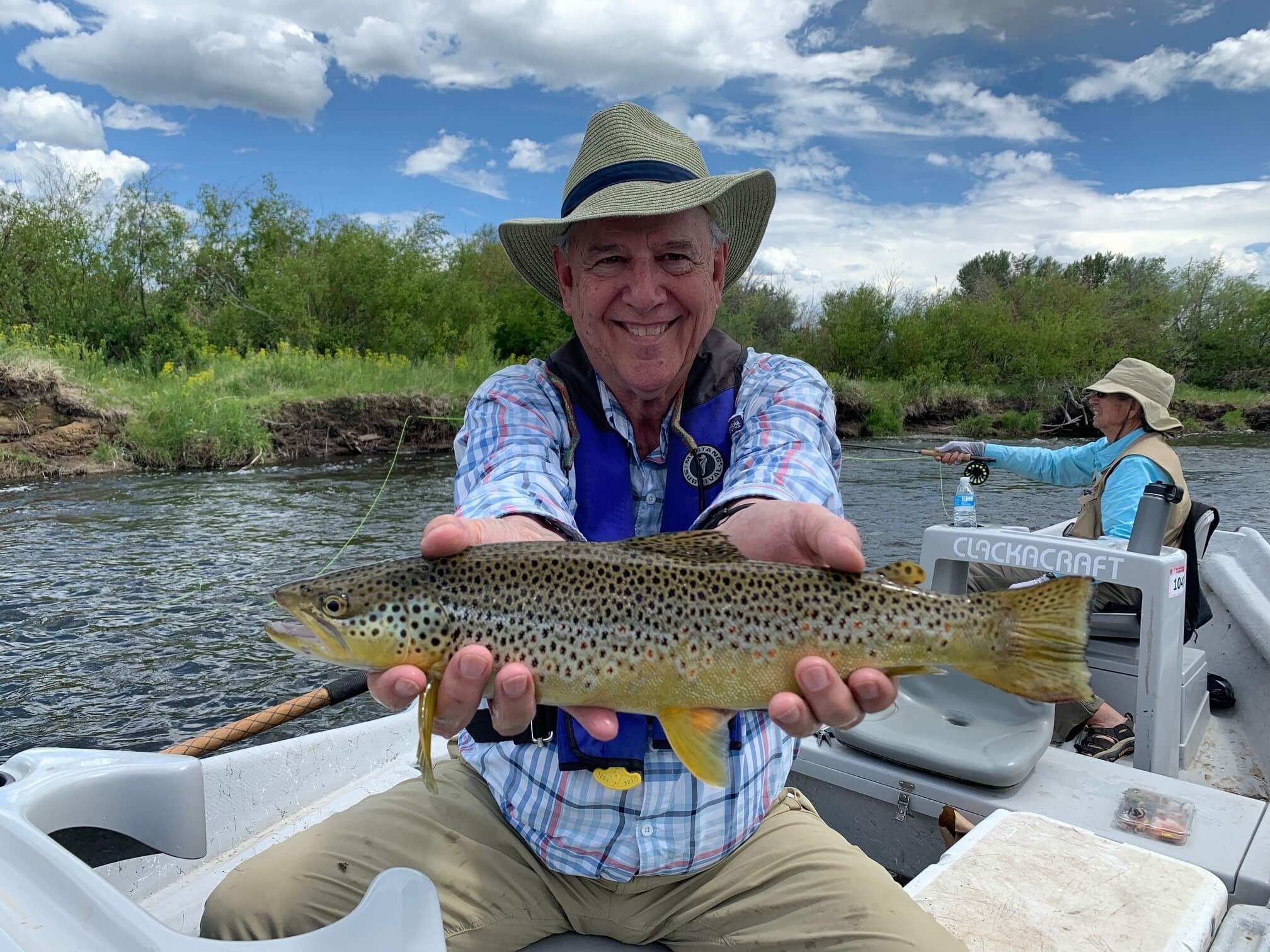 Once the annual Deschutes salmon fly frenzy was on the wane, the passion for trout fishing remained high for FCO members. So on to Montana they flocked. And by most reports, the fishing was excellent. Member Steve Willhite had success on the Clark Fork.