FCO President Jim Hillas, Membership Chair Rick Pay, and member Paul Franklin hooked some beauties out at Grindstone Lakes. Check out the President’s Message and the Gallery for an armchair visit to these beautiful lakes in Eastern Oregon. 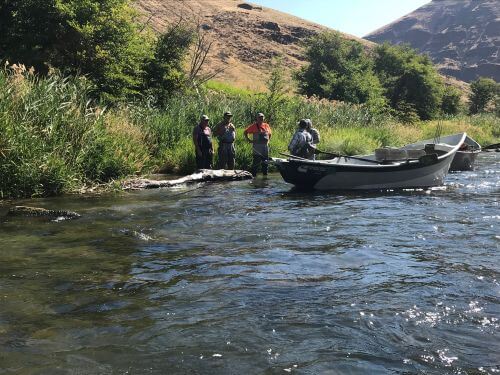 A sunny yet mild (for Deschutes standards) summer morning greeted our group of five Euro Nymphing students as we prepared to learn this new technique touted to change your underwater angling game forever. We all had separately purchased the clinic donated to the Deschutes River Alliance auction by the guides and owners of the Deschutes Angler Fly Shop in Maupin. Our lead professor was the experienced guide, Evan Unti. I joined up with a fisherman from The Dalles and was guided by the competent and patient hand of guide Alex Gonsiewski. We put in at Beavertail and set out to our first classroom. On the water, Evan reviewed the concepts of Euro nymphing, including the rods (at least 10 feet), the weights (2-3 weight), the leaders (about 20 feet for our situation), “sighter,” or colored portion of leader, about 5 1/2 feet of tippet (6X on Deschutes, may be 7X on smaller rivers), and two flies (the bead size being most critical). His demonstration of casting technique was interrupted three nearly consecutive times by pesky trout that had the audacity of interrupting our class time by hammering the nymphs on Evan’s line. After a Q and A and reinforcement of the nuances of the cast and drift, the students took to the water.

Drilling Down on Basics 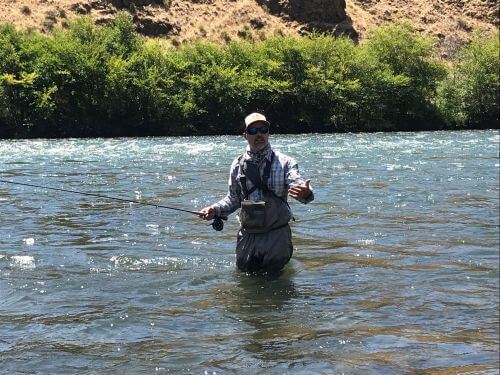 Based on my beginner’s interpretation, certain things are key to Euro nymphing. You consider the hydrology of the river including the different speeds in the water column. The cast is not graceful. We we were instructed to use a flick of the wrist (Horrors! My trout whisperer will turn his ashes over!) to toss the line upstream.  then slightly move the tip of the rod back before the flies hit the water. This motion straightens out the flies so they will drift parallel in the water column and move more naturally by avoiding different current drifts. The next key motion is to move the rod tip downriver by turning your body, keeping rod tip and the sighter the same distance from the water’s surface throughout the drift. Use a slow, even long strip to prevent slack on the line as you move through the drift – that is, if you don’t hook a fish before the need to strip.

Euro nymph beginners on a sunny summer day did quite well. At the head of drifts, I had fish take the fly within 2 seconds of it hitting the water. Landing larger fish is not difficult despite the light tippet. The soft rod tip combined with the relatively heavy butt section allows you to sense the take and bring the fish in without breaking off. Often takes were anything but subtle – good when you lose sight of your sighter in the sun. I got a couple of “yellow bellies” in slower water but the majority of the takers were redsides. Euro nymphing does not employ the graceful rhythm and gentle presentation we love with the dry fly. But I have to join others to agree that it is effective and an option when the surface isn’t where it’s at. 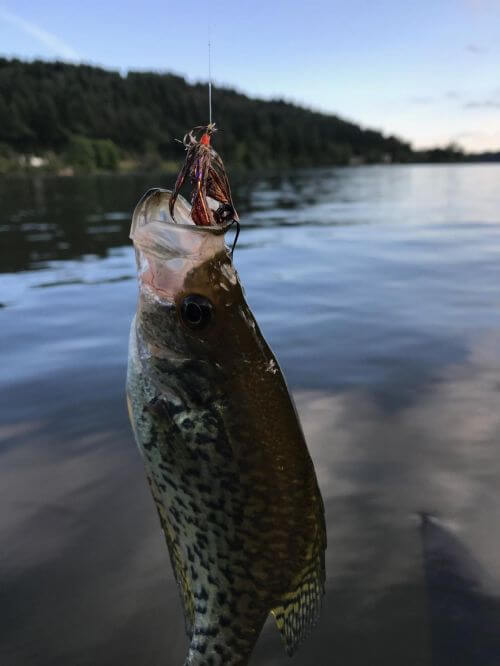 Curt Marr found a fun urban spot to drop a line for a couple of warm summer evening hours of fishing. You’ll find it where the Tualatin and Willamette meet out in West Linn. Take your float tube to the boat ramp and some bass flies. There are even a few Crappie looking for a snack.