The prophet Job was not a fly-fisherman.   Otherwise, his lament would begin with “taketh,” not “giveth.”  The river more often takes fortune from us—missed fish, snapped leaders, flies hung up in trees, long distance releases, busted gear—but on good days the river gives back.

Like Job, I’m pretty good at cursing when misfortune strikes.  Profanity rang out one black day when my favorite steelhead fly box slipped out of my vest and began a long journey bobbing its way down the Deschutes.  I like to imagine that a lucky angler miles away smiled as she found my fly box drifting in a Deschutes back-eddy, maybe alongside a rafter’s errant Coors six-pack.  But sometimes the fishing gods relent and reward you with unusual streamside discoveries.  Here are a few of my more interesting finds. 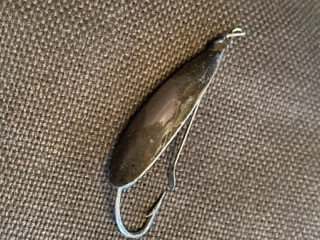 The Teddy Spoon.  One morning, maybe early summer 1990, I was fishing the famous Nine Mile Hole section of the Madison River in Yellowstone Park. You’ve seen the iconic calendar shots of this stretch:  the river gliding past the VW-size boulders and green weed mats, sun glinting in the current flows, insects hatching.  Normally, it’s too deep to wade out to cast to the inviting southern bank. But that summer was a low water year, so I was able to work my way out midstream where I set up shop next to a large boulder encrusted with moss.  After many fruitless casts to a fish rising on the far bank, I took a break and began inspecting my boulder.  Looking down, I saw a glint in the submerged moss.  Reaching and soaking my shoulder, I carefully extracted a handful of moss and the buried object. Eureka!  I found the silver-plated fishing spoon President Theodore R. Roosevelt lost on a long cast in 1903!  A vintage, hand-forged Johnson’s Silver Minnow lure.  OK, maybe it’s not Teddy’s spoon, but it’s been hanging on the rock for maybe one hundred years. 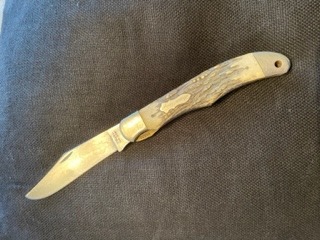 Whitehorse’s Fanny.  It’s interesting to fish the class IV whitewater stretch of the Deschutes known as Whitehorse, not the least to watch rafters go ping-ponging in the boulder gardens, strewing gear and sometimes people as the rafts careen and bounce off rocks and standing waves.  One summer day I was nymphing a deep, boulder-strewn bank run with a LaFontaine caddis sparkle pupa.  As I edged out into the river, a fish took and then started working the heavy current against me.  After a valiant fight with a few Orvis calendar jumps, the fish won.  Fishing heavy water often ends in tragedy, as Hemingway warned in his story, Big Two-Hearted River.  Catching my breath, I began inspecting the boulder I was resting against.  I spied something hung up on a submerged branch.  I reached down and pulled up a perfectly good fanny pack.  Unzipping the pack, I found several items: a beautiful Uncle Henry clasp knife; a marijuana pipe and bag of sodden Mary Jane; and last, but not least, two foil-wrapped prophylactics.  Later back at camp, my friends and I merrily debated whether the owner of the pack was a woman or a man.  To this day, I feel I won the debate hands-down with the self-evident proposition that the owner had to be a man because although a woman camping on a Deschutes float might very well carry one rubber in her pack, she’d never bring two.  However, hope springs eternal among the male members of our species, so the owner was undoubtedly a man.

The Ghost Rod.  Hebgen Lake, MT, part of the Madison River system just outside the Park, is renowned for its summer “gulper” fly-fishing.  One day I was on the lake with my son Nick fishing a weedy area in a small pram.  Anchored, we were casting to multiple tracking rises while swatting clouds of Callibaetis flies from our eyes and nostrils.  The rises began moving away.  “Nick, pull the anchor and let’s row over to that other pod of fish,” I said.  Nick pulled.  “It’s stuck, Dad, in a bunch of weeds.”  Hand by hand, Nick finally heaved the rope up.  “Something is caught in the rope and weeds,” he said.  “Jeez, it’s a fishing rod.”  Well, we got it in.  A beautiful 4-weight Wright & McGill rod with a old Lamson reel.  I’ve since wondered about the rod’s story.  Did a fish yank it from the owner’s hand?  Did the owner throw the rod in disgust after losing a fish like some golfers are wont to do with unlucky clubs?  Did his boat overturn?  Anyway, we christened it “The Ghost Rod” and have given it a new fishing life.

My Simon & Garfunkel “Kodachrome” Moment.  Mid-fall decades ago, my father and I were drifting the Warm Spring-South Junction stretch of the Deschutes fishing for steelhead.  I pulled over, got out my father’s Nikon camera and took some pictures of him casting.  I put the camera back in its case and laid it on a rock while I went fishing.  Back in the drift boat, miles later, I realized I had forgotten the camera.  Yikes!  So flash forward two years later, my parents, who lived in Florida, were visiting here for Christmas.  A phone call rang in from some guy in Lake Oswego who asked me if I was Donald Pyle.  He said he recently found a camera sitting on a rock alongside the Deschutes River.  He opened that camera case and saw a name, Donald Pyle, inked on the inside.  I said yes, it’s actually my father’s camera, which I had left on that rock two years ago.  He came over a day later to deliver the camera.  I handed him a new Wheatley fly box as thanks.  What the hell, I thought, I’ll open the camera and have the Kodachrome film developed.  The pictures, even after baking and freezing for two years, were perfect!  I probably should have called Kodak to volunteer for a testimonial about its film.

Many other times, too many to mention, I’ve lost stuff, found stuff, gotten skunked, and then miraculously been rewarded.  Does it all balance out in a karma-like way?  Ask Job.