One of the regular sections of the Flyline before my tenure was Sage, and Other Sayings. I regret I did not have the depth of knowledge on fly fishing lore to regularly add these short poems, words of wisdom, or insights. Over the years, many members who submitted these sayings in the past have gone on to eternal waters. Thankfully, I have a fairly complete library of old Flylines where the sayings live on. Here are a few from 1999 when Dick Williamson served as both Club President and Newsletter Editor (he was dedicated!). I encourage members to send in old and new Sage, and Other Sayings for our Literary Angler page. LKH

From the April 1999 Flyline

The years will bring their anodyne,

But I shall never forget

The fish that I had counted mine

And lost before they reached the net.

There was an old angler named Brewster

The trout were deluded

The fowl so denuded 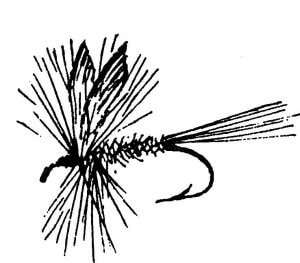 Tail fins, snouts poking out of weedbeds, silver patches where scales are missing against gravels, pinky warts. The more exacting flyfisher looks into the river and asks himself, “When is a trout not a trout?” He looks for imaginary trout and takes away the tail, the fins, the gills, the body, the head – hoping something in the tight area he scans holds one or more elements of a trout. Only then can he conclude that a trout is not a trout – when it was never there in the first place. 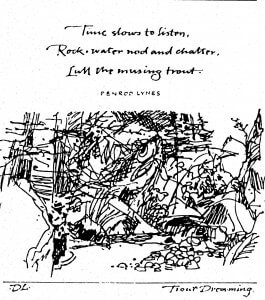