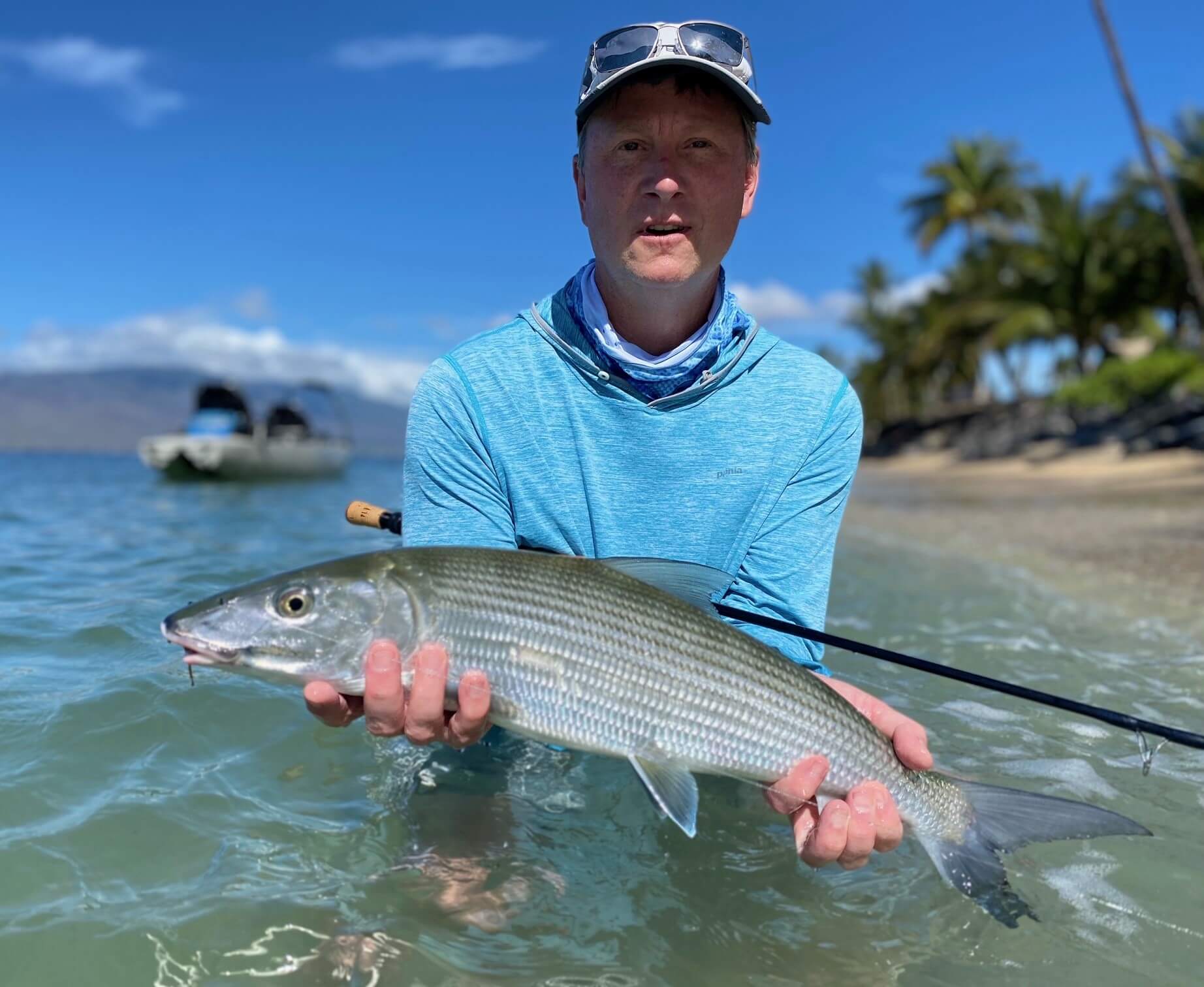 Editor’s Note: Zooming out of Dodge seems to be a theme this winter as so many of us take to our computers and vicariously enjoy spectacular nature, picturesque rivers, and fishing adventures. FCO member Dr. Marty Balish turned dreams into reality with an escape to Maui and an unlikely fly fishing experience. Thanks for sharing, Marty! lkh

The plan seemed simple.  Book a day of fishing during a family trip to Maui. We all went to escape the Portland rain and January weather. Matt Langer of Sherwood, OR and I booked a day with the only fly-fishing guide service we could find in Kihei. ‘Local Fishing Knowledge‘ was the name of the company and Captain Jon Jon claimed over 20 years of experience.  The guide service and the fishing could not have been better. But, even in Maui, rainstorms do happen.  On our first day in Maui, 5 inches of rain fell over 24 hours and turned every creek brown, and the discoloration effected the ocean surrounding this Hawaiian island.  This lasted for days, and we were running out of days.  Our Tuesday fishing booking moved to Wednesday, then to Thursday, when finally, the captain thought the water had cleared enough for us to give it a try.

We met at 7:30 a.m. at the launch site.  Our plan was guided fly fishing in 2-man kayaks, casting to Bonefish.  Yes, Bonefish in Maui.  The captain wanted to check out our casting ability, and we delivered some reasonable double hauls in the grass field as the sun began to come up.  It was time.

The kayaks were really stable, equipped with a casting bar to allow standing and leaning into for stability.  The guides were in the back and used a foot propulsion system, with a peddling motion allowing forward and backward maneuverability. Our guides were friendly, knowledgeable, and calm.  The water clarity looked great, and we all knew that the fish had probably not been able to feed effectively for the past 3-4 days!

This type of Bonefishing was different than anything I have seen before.  This is no Bahamas or Christmas Island fishing.  It does involve sight fishing, but also involves covering likely water.  The “flats” are smaller areas of sandy, rocky bottom in between the corral.  The water depth is 4-6 feet, so there was no sighting tailing bones on a sandy bottom.  The fish were deep, right along the bottom.  The first time the guide spotted some fish, telling me there were 4-5 fish moving to my right at 12 o’clock, of course, I said, “I can’t see them.”  But eventually we both did see fish.  LOT’S OF THEM!

After lining and spooking my first several opportunities, I made a cast into likely water, allowed a 6 second sink time, and began my retrieve.  Slow double strips…pause.  The fly got smashed, and after a smart “strip set” the fight was on!

For those that are lucky enough to have experienced this, the first run of a Bonefish is absolutely thrilling! They go and go and go…peeling all of your brightly colored fly line off of the reel, then an alarming amount of the backing, and you wonder if it will end.  It would be easier for everyone if the run didn’t end, because when they turn, you are obligated to reel like crazy for 1-2 minutes to regain the line and keep the tension.  The kayaks we were using were stable for fighting the fish standing up, and great for helping keep the tension, because the guide could backpaddle to help keep you tight on the fish.

The second run of this Bonefish was equally thrilling, as the fish took back nearly everything it had on the first long run.  But the second run was also a little worrisome, because my arms were now quite tired, and I was really not sure if I could do this again.  But, I could.

Captain Jon Jon has now expertly maneuvered me near to shore, and I hear vacationers on their lawns adding some encouragement and cheers.  I realize that this fishery is literally right off shore from rental condos and resorts, that people spend nice weeks paddle boarding, snorkeling, and enjoying the warm Hawaiian breezes.  It is just right there, but I was the only one doing this.

The net surrounded the fish! 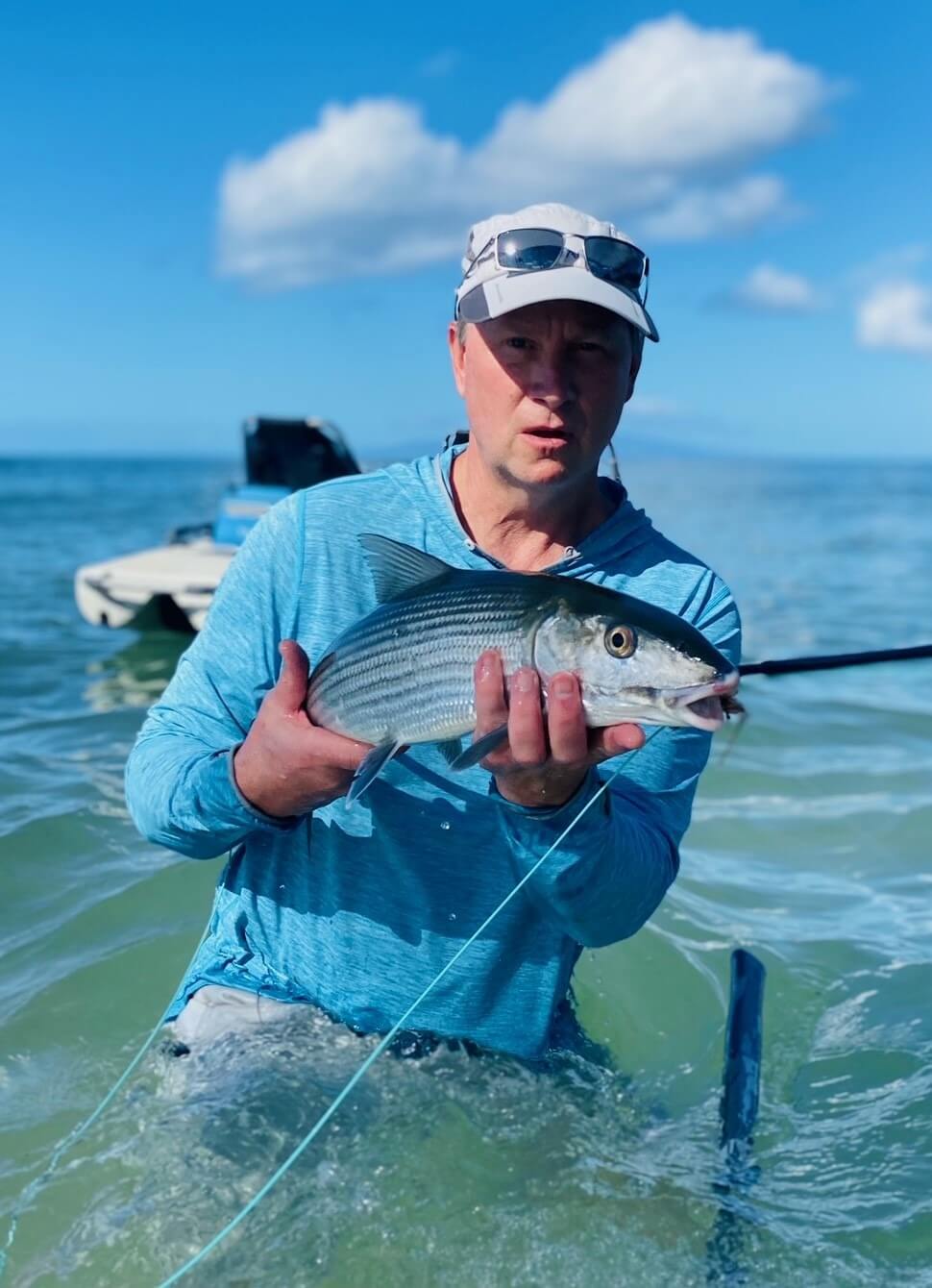 At this point you hop into knee deep water and pose for a photo.  These fish are large (6-8 pounds is common)and absolutely perfect.  Not a mark on them.  The captain felt that most of these fish have never seen a fly before.  You watch this beautiful specimen swim away, and suddenly you think…lets do that again.

The second Bonefish I caught was larger.  The circumstances of the catch are also very interesting I think.

This fish was a single, meaning travelling alone.  And, it was only 10 feet in front of us.  I saw it!  Too late, right?  He is going to be spooked by our kayak, right?  NO!  As Jon Jon explains, these older and larger fish are very accustomed to seeing people on paddleboards.  The water depth and perhaps their speed and experience have conditioned them to this, and they really were not threatened by our presence.  As I watched in amazement the fish swam leisurely on its way, and just when it was out of my sight, maybe 30 feet away, I placed my best cast of the day slightly to the side, and 15 feet ahead of its position.  As I counted to 6 for the fly’s descent to the bottom I was totally focused, but completely unprepared, because after only one small strip of the fly, it was hit hard, tearing the fly line from my fingers, and off it went!  This fish took 4 very impressive runs, finished with some surface runs, and took nearly 15 minutes to bring in.  This was a nearly 10 pound Bonefish…really a fish of a lifetime!

Over the course of a 4 hour morning, I landed and released 2 nice Bonefish.  My fishing partner caught and released his first ever Bonefish on a fly.  We both had a half dozen other good takes, and our share of missed casts.  Many takes were from casting to sighted fish.  Others were literally just covering water.  Apparently, there are a lot of Bonefish in Hawaii!   As it got towards mid-day and we stopped seeing Bonefish, we moved out further towards the reef edge, and there I landed 2 Barred Jacks.  These were beautifully colored fish, quite fun to catch, and as I confirmed later that night, they are extremely good on the grill!

I highly recommend this fishing experience on your next trip to Maui! I’ve already got a couple days booked for next January though, so you will have to work around that! 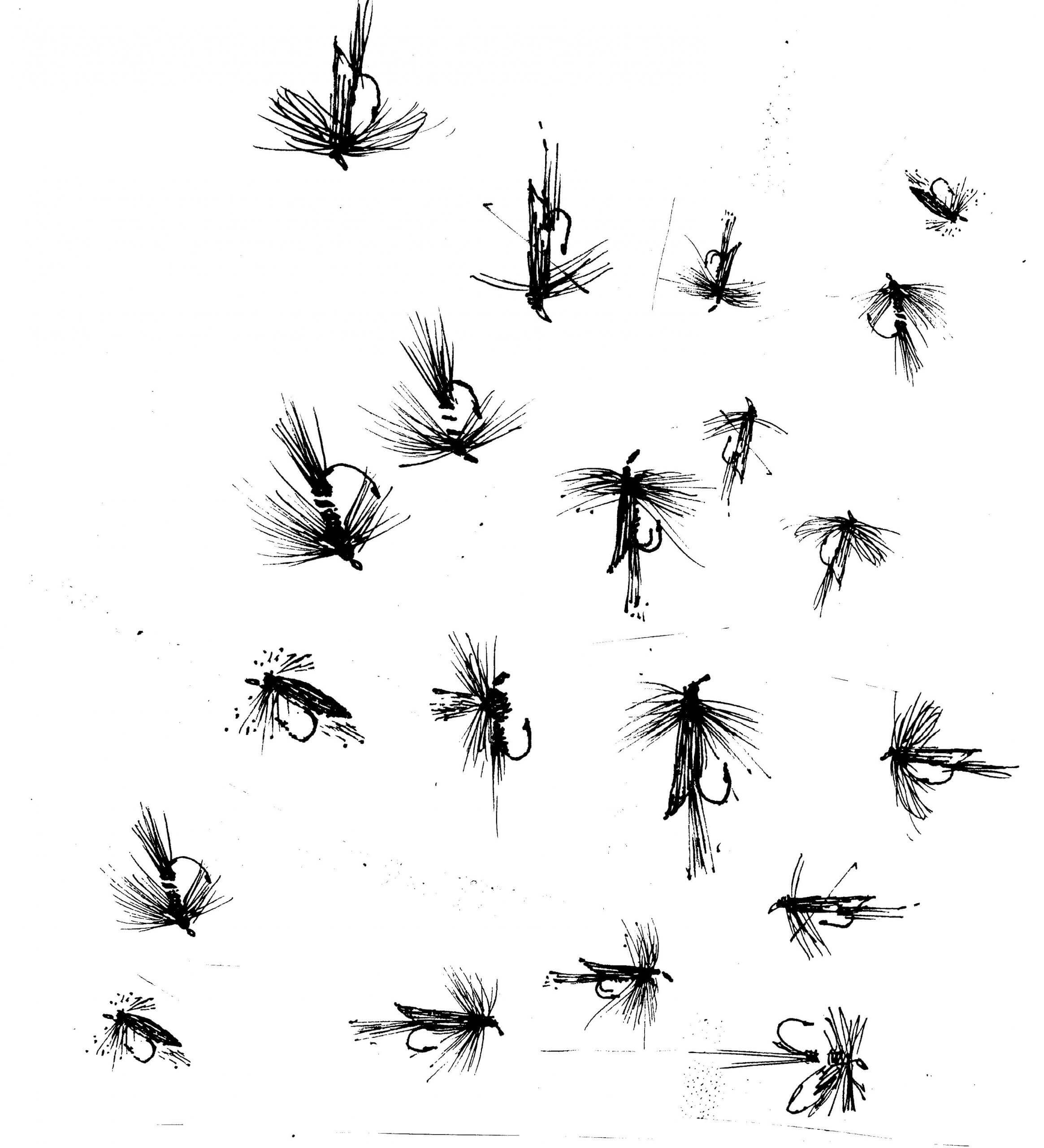 Tap your Feet to Flyfishin’

New member, Bill Valenti, listed photography and fly tying as creative pursuits in his membership application. And thanks to the email request for Flyline submissions sent out by Ross Beatty, Bill has informed us that he is a folk singer as well! He sent this link to a song he wrote just before he waded into the sport of fly fishing. Bill said, “I was fascinated by the very esoteric vocabulary  – especially in fly tying.  Where else do you encounter “peacock flash-a-boo” and “blood-quill marabou skirt”? Have a listen to his song, Flyfishin’ by clicking here. Perhaps we could entice Bill into singing his song when we are able to get together later this year! Thanks Bill!