A Sturgeon of a Lifetime

Editor’s Note: This piece comes to us by way of Chris Redhouse, son of long-time member and past Club Treasurer, John Redhouse. Chris was not smitten with the love for fly fishing that possesses his dad. But an adrenaline-filled hook-up may have rekindled the flame for a long lost love. Tight lines to you Chris! LKH

Late July of 2018, I had the opportunity to travel from my home in Greensboro, NC to Portland, OR for business. Having  grown up in Portland, it was a welcome homecoming, and gave me the chance to visit family and take in the Northwest’s finest weather and natural beauty.

All the makings of a great trip, until . . . I was invited to go fishing. What, you say? What could be finer than a fishing trip in the PNW? Well, I’ve long had a love/hate relationship with fishing. As a child I spent three years living and fishing in northern Indiana, where I developed a love of the sport, devouring books on the techniques for bass, catfish, Northern Pike and crappie. I had my own gear, my own 5th grade fishing buddy, and local knowledge of the water. We considered ourselves masters of the St. Joe River!

But since then, adult life has taken me in new directions. My father retains his lifelong passion for fishing, and will occasionally invite me to join a guided outing. Similarly, friends and colleagues will occasionally invite me to chase a tarpon or bonefish on a fly.  It absolutely sounds fantastic, but the reality of getting after one of these species once or twice a decade means you’re woefully short of the required understanding and technique, which limits you to taking directions from a guide, or worse, simply playing a fish that was hooked by your companion. I’d lost any remaining interest in fishing. Hours of boredom, held captive on full day outings, the humiliation of a “guided” trip when you really have no feel for the specialized techniques required, e.g. back-bouncing eggs, fly casting in the wind, etc.  I’d just recently returned from Mexico Beach, FL, after a disastrous outing for tarpon for which I hadn’t the requisite skills, and had a horrible guide who absolutely berated me for three days, causing me to declare, “No more!” I was done wasting my time on these infrequent trips and felt no remaining passion for fishing.

So it was against this backdrop that I joined my father and pro guide Ed Chin for an evening trip on the Columbia River for sturgeon. If you don’t know Ed, he’s a great guy and a pleasure to fish with – very patient, even if you don’t know what you’re doing. I told myself this wouldn’t be so bad. One last trip. Beautiful weather, no real specialized feel required to participate, just an easy day with Dad and Ed. It’ll all be over a 3-4 hours and I’ll be back on dry ground.

With low expectations on my part, we set up just upstream of the Chinook Landing boat launch near Troutdale on the Oregon side. With hot weather prevailing, the river was seething with pleasure boats and jet skiers, creating what seemed a very unlikely setting for any serious fishing. But, as I said, my expectations were low.

After the first hour or so we re-positioned, trying several holes and ultimately re-setting in 30 feet of water, adjacent the old Alcoa aluminum plant. We had three rods out, 10 oz of weight holding down a small chunk of herring soaked in some smelling formula. And then it began. Dad’s rod tip began bouncing, seemed there was some interest down there. “Chris, take it.” Here we go, reeling in someone else’s fish!  But I’m used to it, so I grab the rod from the holder and set the hook. The fish provided a nice initial struggle, but after we tangle for a minute or so, I begin to gain on it and it was apparent that we’d got a little guy on. No problem, I’m enjoying playing the fish and it appears that we won’t go home skunked on this day! Shortly, the second rod begins bobbing, and Ed quickly determines it’s just my fish having caught the second line, so we began carefully reeling in both rigs.  My fish surfaced and looked to be about a two footer. While some consider sturgeon ugly and prehistoric looking, it’s a pretty fish, albeit small. Ed works to separate the tangled lines and Dad works to free the sturgeon from the barbless hook setup and send him on his way. We came, we fished, and we caught (a) fish! But just as I was mentally declaring mission accomplished and ready to open a beverage, the third rod, most importantly my rod, begins to bob in its holder.

The Dizzy Dancing Way You Feel

If you haven’t scrapped with a sturgeon before, the initial stage of the encounter is less than dramatic. A modest pecking visible at the rod tip, and then once the fish has decided it wants to eat, the rod begins to bend more dramatically. Pick up the rod, give a firm hook set, and the tug o-war ensues. And for the next two minutes, there wasn’t much difference in the fight compared to the two footer we’d just released.

Until the fish simply turned and proceeded to run half the spool from the reel, as if I’d just hooked into a passing car. No head shake, no breaching. The fish had just determined it was done with this little encounter, turned with the current and took off. At which point Ed quickly realized the situation. “That’s a big fish!” So we pulled anchor and took off after it. And for the next 50 minutes we’d repeat this three times, chasing it down, I’d gain line on it, and then it would make another strong 100 yard plus run. Without question, this fish could not be turned without chasing it down. It was too big, too strong and had the Columbia’s current to leverage.

As my right bicep began to reach its limit, and the butt of the rod was wearing a hole in my right hip, I was ready to simply declare a truce and give up on it. However, with Ed’s encouragement, it appeared that perhaps we were at the turning point and this fish was wearing down. I cranked steadily and eventually the leader appeared.  A nearby boat had been shadowing us to see what the fuss was about. And finally, it appeared! Gasps, cries of “Did you see that?!”  And as this river beast broke the surface, it was redemption! It made up for all of those fruitless days on the river, in the cold rain, at oh-dark-thirty, sucking the joy out of fishing for me. This beast was truly redemption. What a fish!  Once it was done, she rolled up next to the boat and became for the moment very still, gills moving to catch her breath. The hook was easily removed and Ed brought her head into the current to help revive her. Using the seven foot rod as a reference we estimated the length at 11 feet. Two parallel scars from tangling with some mechanical or natural foe along the way, but otherwise just a pristine, beautiful, ancient fish!  We got a quick video of the fish reviving, and then with an explosive thrash of the tail, she was gone. Caught, released and living to fight another day. 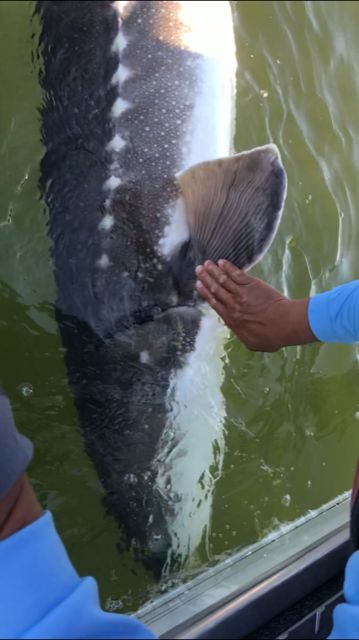 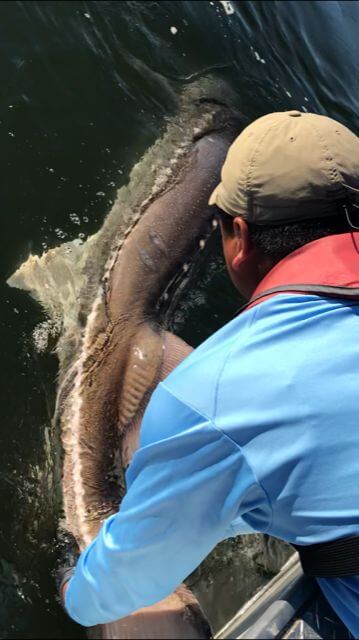 I was completely spent but absolutely thrilled at the outcome. Finally, an enjoyable father/son fishing trip! Good weather, superb guiding and hospitality from Ed, and a bucket list oversized sturgeon.

Later, using published tables, the weight and age of the fish were estimated in excess of 500 lbs and 50 years. By any standard, this was a fish of a lifetime, making it a trip I’ll always remember.

And it may have even rekindled my interest in fishing a bit.  A friend recently invited me to play with a fly rod on the Madison River in Montana this October, and I went ahead and cashed in my airline miles to make the trip.  Perhaps it’s like golf. I’m told that one good shot among a dozen duds keeps you coming back.

Another Editor’s Note: And speaking of coming back . . . . Chris sent a picture of his trip to the Madison with a brief report. Sounds like the romance is starting to blossom!! LKH

I had a great two days of fly fishing in Montana. Day one was all about learning some basics. Once we went [with] smaller [flies] on day 2 – #22 – I had around 15 takes and landed six. It was absolutely beautiful countryside and I’ll definitely be back! 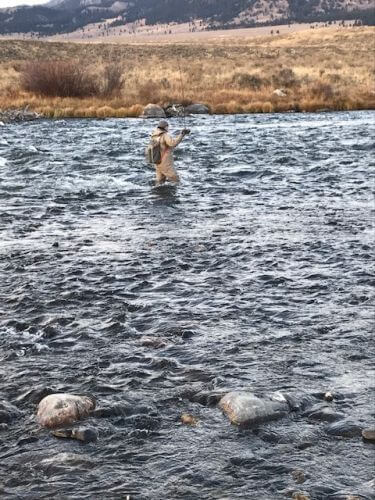