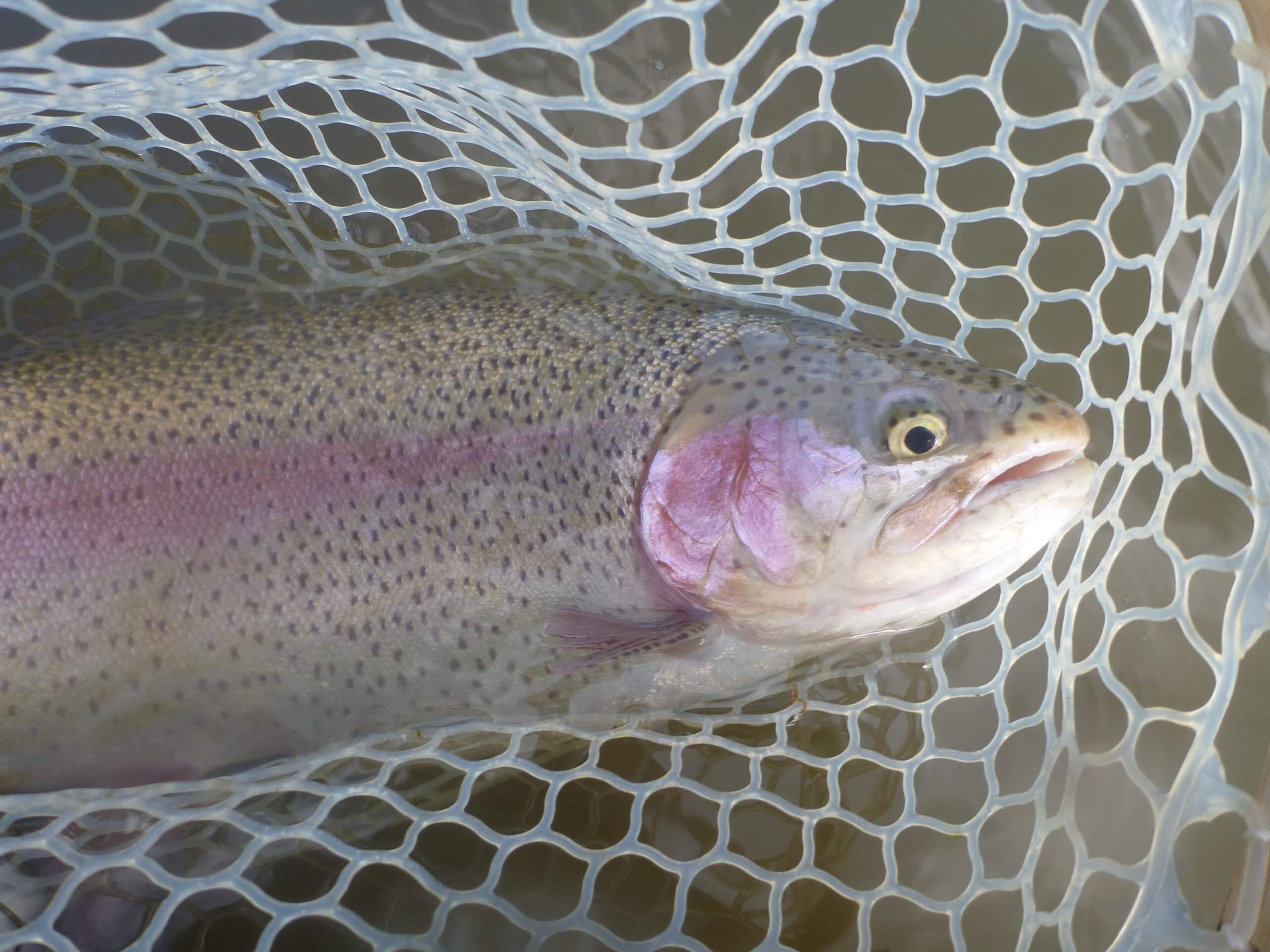 Editor’s Note: A few Club members managed to sneak out to wet lines for eager rainbows recently. First, John Pyrch admitted he couldn’t stay in any longer when the weather was so beautiful. And John even shares some of his Rocky Ridge secrets! Janet Arenz and Curt Marr just had to have their Deschutes fix. Just don’t tell the governor! LKH

I had to get out of the house.  This stay-at-home directive was getting me down.  The weather had been fantastic and I should have been fishing.  So I signed up for a mid-week day at Rocky Ridge Ranch.  If I played it right, I could make it up there and back on one tank of gas and not have to interact with another person.  Perfect.  I left around 6 a.m. and drove east on Highway 84 to The Dalles and then headed south to Tygh Valley and Wamic.  Cruising to the tunes of The Guess Who and CCR was fantastic.  Boy, it felt great to be on the road again and headed to a place where I love to fish for big trout.

I arrived at RRR around 8:30 a.m. and noticed two rigs were parked at Mule’s Ear (the upper lake) and the anglers were on the water in their pontoon boats.  So I headed down to Wild Rose (the second lake situated by the cabin).  There was one more truck parked near the boat ramp and the fisherman was down by the lake’s dam in a float tube.  I parked a good distance away and got my gear ready.  It was a gorgeous day – sunny and no wind.  I started out with a #6 bead-headed brown leech with a sinking tip line and a 5X leader.  As I worked my float tube toward the middle of the lake where the water was deeper, I had a hard take that broke off my fly.  I tied on another leech pattern and upped the leader to 4X.  Again, as I was pushing toward the dam, I had another impressive hit and the leader snapped.  What is going on!  I rigged up another fly – this time a black leech with barbell eyes and used a 3X tippet.  As I was approaching the dam, I had a fish hammer my fly and it took off like a run-away freight train.  I managed to get the fish on my reel and played it (or was it playing me) for a good 5 minutes.  Finally, I got a look at the trout and it was huge.  There was no way it would fit in my long-handled boat net. I worked the monster trout next to my float tube and, after several attempts to net the fish, I gave up and managed to remove the hook and let it go.  I figured it weighted at least 10 pounds   It was going to be a great day. 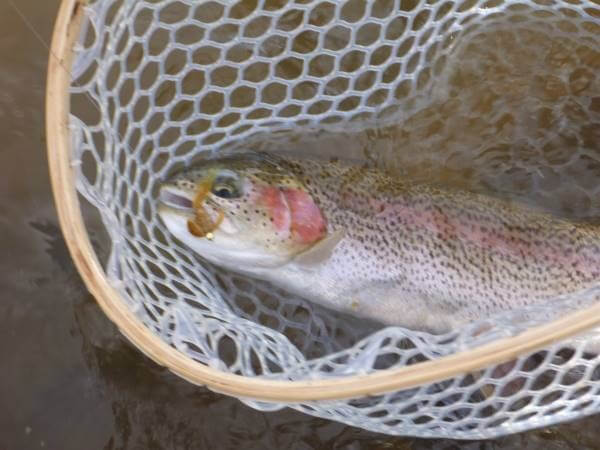 I fished parallel to the dam for a couple of hours picking up 4 more nice fish on my black leech pattern.  I am still recovering from back surgery and my right leg is very weak.  So I worked my way back to shore to rest and have some lunch.  I spent another 3 hours in the afternoon fishing along the dam and had wonderful success netting 6 more big trout.  All the trout I caught were over 20 inches and several were in the 4 to 6 pound range.  I hooked all 11 fish on my black leech pattern and have retired it to my box of honor roll flies.  Although the covid-19 virus has severely limited our activities, I will always have fond memories of one spectacular day of trout fishing during the pandemic.

And here are a couple of entries from the Arenz and Marr Forbidden Diaries . . . . 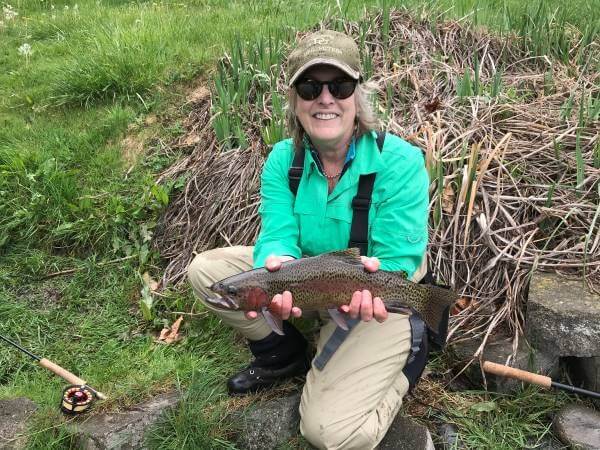 Janet with 16 incher at Nymph Rock

The season for trout had just opened hours before our arrival. It was a lovely weekend in a micro-clime on the Deschutes, avoiding some of the valley’s rain. We fished camp water at a friends cabin, safely away from others. The fish were kind, and stayed interested in our switching up dries, nymphing, dry and dropper, double dries. Here is the weekends notable catch, on a Prince Nymph cast by Janet. 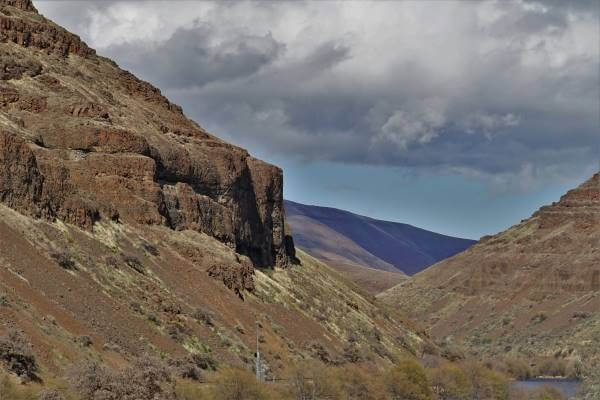 Before the Lockdown – Last Cast for Now

In the moments before all the parks and outdoor recreation areas were closed down, Curt Marr and I drove out to the Deschutes with fly rods and a good camera. We wandered from Sherar’s Falls down near Mack’s Canyon, stopping for little trout runs and big memories. We reminisced over our favorite camp spot and summer steelhead run from across the river. We pulled out a dozen sage brush blocking the quiet little entrance to the pictograph man. The sun dodged clouds and it warmed up to a happy seventy degrees, so we could have the truck windows rolled down. I got some shots that made me happy, and Curt got a very pretty trout that made him happy. 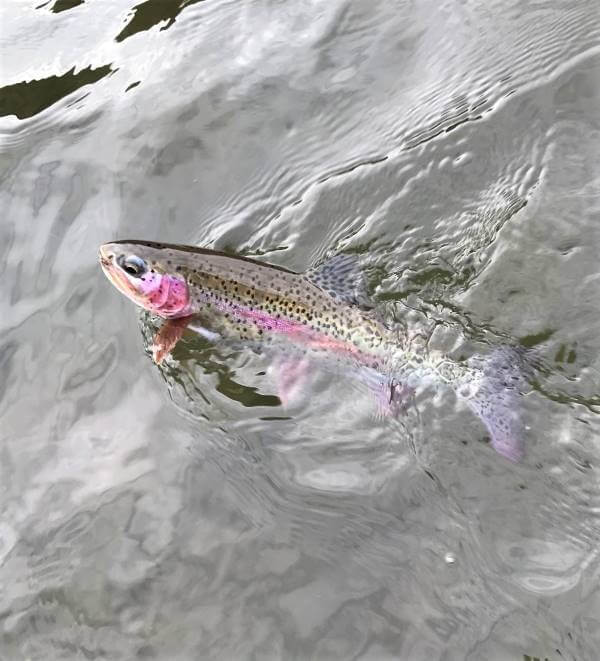