In what may be a precedent-setting action on August 24th, Oregon and Washington “closed the Columbia to steelhead fishing” (their words) as the initially optimistic 2018 forecast for upriver summer steelhead of 182,400 summer steelhead was revised sharply down to 110,300 fish (a 40% reduction in the forecast), reduced again on August 28 to 96,500 (another 8%), and now, just reduced an additional 4% further to 92,800 steelhead expected to pass Bonneville Dam – half of the initial forecast.

Retention Closure is not a closure

The fact of the matter is that anglers were still fishing on the Columbia River, as the regulations merely prohibited “retention” of any steelhead (hatchery or wild). Catch and release fishing for steelhead was not prohibited, and with fall Chinook salmon migrating throughout the Columbia, sport anglers were still fishing. Additionally, a mainstem lower river gillnet fishery had been authorized during that same August week in the river below Bonneville, and wild steelhead with a later run timing (like B-run steelhead) that may have been also delaying their migration due to warm waters below Bonneville Dam, were likely intercepted in that fishery.  This commercial fishery’s impact on wild steelhead will likely never be known as the on-board observer program in place during the 2017 non-treaty fishery was only voluntary for the gillnet fleet and the commercial fishers refused to host any.  It is unconscionable that there was and will be no M&E on this fishery – the only consolation is that the non-treaty commercial fleet has received only five mainstem fishing days so far in all of 2018 season.

However the gillnets are not the only impact on wild steelhead, with daily reports of many sport-fleet boats at the cold water refugia from the Cowlitz and Lewis Rivers, the migrating wild steelhead had no sanctuary there. These fisheries should also be subject to robust creel surveys and monitoring at boat ramps and landings along the Columbia.

Additionally, Tribal fishers were taking wild steelhead in several cool-water refugia such as Drano Lake (WA) and Herman Creek (OR).

Everything Changed on September 11

The Columbia late-summer and Fall fisheries all changed when Oregon and Washington announced that ALL salmon and steelhead fishing in the Columbia from Buoy 10 to McNary Dam would close on September 12. The chinook salmon passage was dropping and the run forecast was downgraded to 150,000 upriver bright fall chinook past Bonneville.

It is critically important to note that when the agencies limit “retention” of any particular fish, fishing for and retaining salmon and other fish is often still legal. Agencies consider the “retention closure an effective conservation measures because they believe it lowers fishing pressure. However, because wild steelhead must be released unharmed under existing rules anyway, the steelhead “closure” acts more as a conservation measure for hatchery steelhead than real, absolute protection for wild steelhead. 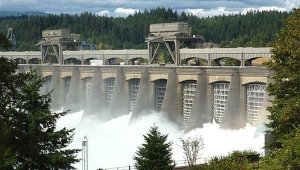