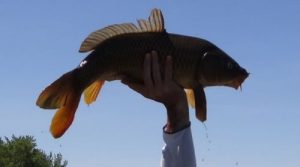 Editor’s Note: This story from our Program Chair, Ross Beatty, reveals a few tidbits (or should I say tiny breadcrumbs) on his strategies for success catching massive Columbia River carp. He and FCO Treasurer, Ken Betschart, got real carpy with fellow members of this secretive fishery society. I hope I can figure out the password to entry next year! LKH

Last weekend FCO members Ross Beatty and Ken Betschart joined a handful of other friends at Crow Butte Campground for their annual Carpfest on the Columbia River. After an evening of spirited, libation fueled, conversation around the propane campfire Friday night, Saturday dawned with ideal conditions for chasing carp. Bright sunshine and a mild western breeze gave promise to the day.

After breakfast the crew split into a couple of smaller groups and headed out. Ken and 3 others used his 20’ Hewes Craft to access some mid-river islands that rarely see fishermen, while Ross and his group went by car to try some big flats near Umatilla. Armed with 8 weight rods, floating lines, and an assortment of carp flies they mounted their assault. This year the stars aligned and there were carp all over the flats, many with their tails up and heads down, which is a very receptive posture. Soon rods were bent and backing was screaming off of reels as carp made their long runs trying to escape capture. Many carp were caught, and unless you count deer and eagles and pelicans, there was not another soul around except for our group. It was a glorious day to be a carp fisherman.

That evening at the liar’s table in camp stories of the day were told. Tales of triples and doubles and broken rods and carp so large that they couldn’t be turned. Newbies caught their first carp and veterans lost count of the number they had caught. Drinks were poured. Toasts were made. Every sunburned face had a smile. Maybe some of you can join us next year? 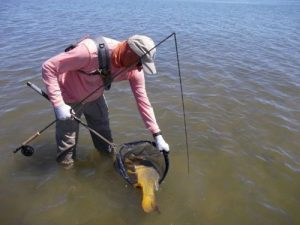 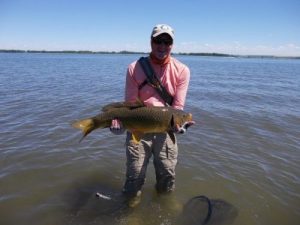