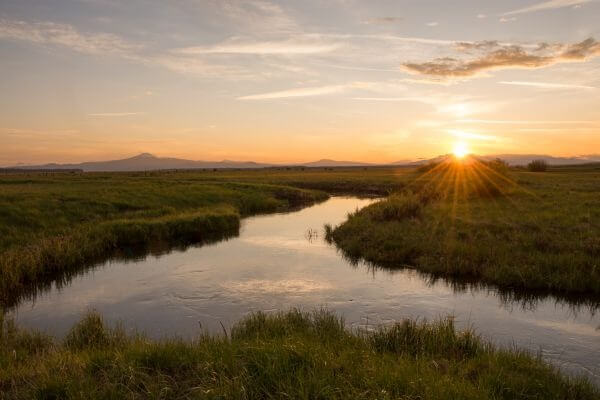 Oregon’s Williamson River is on many fly fisherman’s lifetime lists and legendary for its trophy native trout. The river’s large, native redband trout thrive on the river’s exception­ally high density of bottom-dwelling insects. In late spring and early summer, a prominent black drake mayfly hatch draws anglers from across the West to catch these trophy fish, which often exceed 20 inches and can sometimes reach over 30 inches.

Rising from a large spring on Fuego Mountain in the Fremont-Winema National Forest, the river sweeps a great arc through the Cascade Mountains and enters the 41,230-acre Klamath Marsh National Wildlife Refuge. At the heart of this diverse and important landscape, Western Rivers Conservancy (WRC) is working to conserve the 2,200-acre Timmerman Ranch, which sits on the northeastern edge of Klamath Marsh NWR. Three miles of the upper Williamson meander across the ranch, and provide a vital source of water for the adjacent refuge.

WRC purchased the ranch in 2019 and is working to remove the property’s dilapidated barns and other structures. WRC will convey the land and its senior water rights to the U.S. Fish and Wildlife Service for inclusion in the adjacent Klamath Marsh NWR. Our efforts will protect three miles of the upper Williamson River, a haven for native trout and imperiled wildlife; repurpose critical water rights to the Williamson River and Klamath Marsh, improving the quantity and quality of water across the Upper Klamath River ecosystem; and create new access for fishing, waterfowl hunting, wildlife viewing, paddling, hiking and educational programs.

Be part of making this critical project succeed by attending the Annual FCO Auction!